So the German paper is finally out. As far as I know, this is the most extensive analysis of immigrant crime in Germany. Still, it is a quite simple analysis in some ways. Aside from the usual business of adding yet another replication of country of origin predictive validity, it showed the important fact that while age and sex differences matter for crime rates, the country of origin differences are so large that this does not matter much for the purpose of doing correlations or regressions. It does matter for the absolute differences between countries. See the figure below. 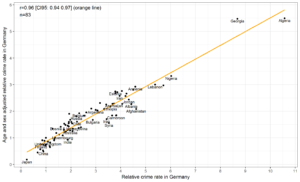 The two outliers may be due to some data error. I checked the source files, the numbers are real enough. The problem is perhaps related to incorrect matching between the crime and population counts.

Whatever the case may be, the correlation before and after adjustment is so large that it doesn’t matter much whether one does them or not. This has an important implication: we can use unadjusted data. Studying immigrant performance is often somewhat of a scavenging game because they don’t regularly publish the numbers by country of origin. So one has to rely on various obscure documents to find the data, usually reports in the native language. In this case, I came across the data on Anatoly Karlin’s blog which was from some image floating around on the internet (LARGE).

The crime data is quite extensive covering just about every possible crime one can be convicted of in Germany, which is about 1000. This makes it possible to examine the crime profiles of countries too, which was not done. E.g. it has been noticed that violent crime rates seem to be easier to predict, and are more strongly related to IQ at the individual level too. I am too busy to conduct this research, but I’d help out anyone else who would want to do it. I think it is more important to cover more countries and have more outcomes. When one has e.g. 10 host countries x 50 origin countries x 3 outcomes, one can do one huge analysis to check the importance of each. We have already compiled some UK data (only a few outcomes), and we are currently trying to buy some detailed Swedish data. If the Swedish data also validates the adjustment method, then we can speed up things by merely using this method for all other countries instead of having to find crime rates by age x sex subgroups, which is hard or expensive to come by.

Educational psychologist 41(4), the issue that is about multiple intelligence ‘theories’