May be another case of a zombie idea: one that keeps being refuted only to come back under another term, and then await refutation for 10-20 years. It is also fairly obvious: systematic approaches to more or less everything work better than ad hoc, haphazard ones. There’s no reason to expect this also not to be the case in mainline education/learning/teaching. After all, learning from prepared materials means that one is essentially taking in structured, distilled information based on others’ experience, instead of having to acquire a lot of experience oneself. Given the limitations of the ability to correctly generalize from personal experiences, and the likely unrepresentativeness of a given person’s experiences relative to the population of all possible relevant experiences, there seems to be little reason to expect this to be a good method of learning.

Indeed, why don’t we let pilot trainees try to work out for themselves how to fly airplanes? Why don’t we let doctor trainees work out what method of surgery work ‘best for them’? Why do we teach martial arts/combat skills instead of letting police and military trainees figure it out themselves? Why do we expect things to work differently in mainline education than in vocational education?

What does the science say? I was able to find a few papers.

Why Minimal Guidance During Instruction Does Not Work: An Analysis of the Failure of Constructivist, Discovery, Problem-Based, Experiential, and Inquiry-Based Teaching

Evidence for the superiority of guided instruction is explained in the context of our knowledge of human cognitive architecture, expert–novice differences, and cognitive load. Although unguided or minimally guided instructional approaches are very popular and intuitively appealing, the point is made that these approaches ignore both the structures that constitute human cognitive architecture and evidence from empirical studies over the past half-century that consistently indicate that minimally guided instruction is less effective and less efficient than instructional approaches that place a strong emphasis on guidance of the student learning process. The advantage of guidance begins to recede only when learners have sufficiently high prior knowledge to provide “internal” guidance. Recent developments in instructional research and instructional design models that support guidance during instruction are briefly described.

The great irony is that:

A number of reviews of empirical studies have established a solid research-based case against the use of instruction with minimal guidance. Although an extensive review of those studies is outside the scope of this article, Mayer (2004) recently reviewed evidence from studies conducted from 1950 to the late 1980s comparing pure discovery learning, defined as unguided, problem-based instruction, with guided forms of instruction. He suggested that in each decade since the mid-1950s, when empirical studies provided solid evidence that the then popular unguided approach did not work, a similar approach popped up under a different name with the cycle then repeating itself. Each new set of advocates for unguided approaches seemed either unaware of or uninterested in previous evidence that unguided approaches had not been validated. This pattern produced discovery learning, which gave way to experiential learning, which gave way to problem-based and inquiry learning, which now gives way to constructivist instructional techniques. Mayer (2004) concluded that the “debate about discovery has been replayed many times in education but each time, the evidence has favored a guided approach to learning” (p. 18).

which itself can be seen as the failure or refusal of proponents to learn from others’ experience, in line with their recommendations for teaching! Deliciously meta. The caveat of this review is that it is almost entirely narrative, not numerical. So I looked and found a large meta-analysis.

However, the handling of publication bias was not very good, and unpublished studies showed smaller, near-zero effects, but there were not very many of them. I did a quick re-analysis of the data, and found some signs of publication bias. Funnel plot: 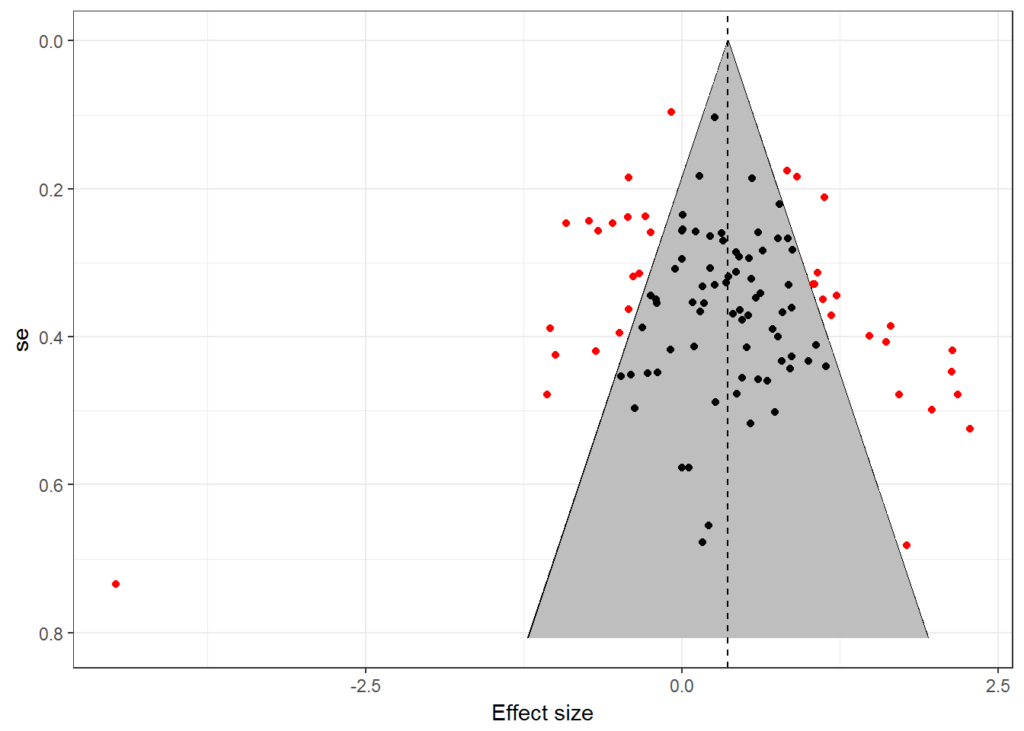 which does look like there’s some missing studies on the left side.

Phonics is the method of teaching how the alphabet works directly, e.g. the better <b> usually stands for the the phoneme /b/, except in a few cases where it is silent: debt, dumb, bomb, lamb, these usually end with <mb>. Repeat for each letter and each sound. While English spelling is inconsistent, the spellings contain many strong but imperfect patterns. <b> is not usually pronounced /t/. Some odd spellings are explainable in terms of etymology, so if one can recognize the source language (e.g. French), one will be able to remember how they deviate from the normal spellings/pronunciation.