I know, I know. It’s fashionable to hate on formal education in the rationalist community. Here’s an obligatory Twitter poll: 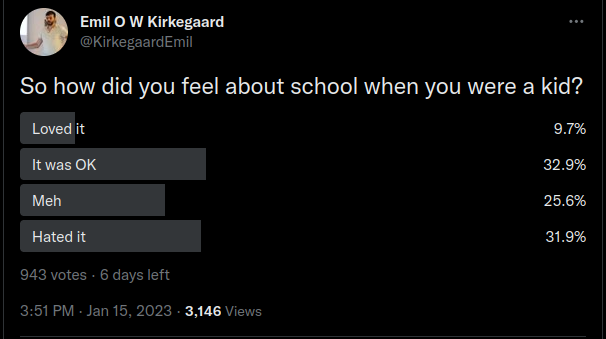 And there’s even some push-back in the funny article Why do you guys hate school so much?. However, let’s forgo the usual survey study wars, especially because the surveys on this seem to be particularly bad, and look at a measure everybody can agree maybe on: suicides. Does school make students kill themselves? Yes, says a new economist paper:

This study explores the effect of in-person schooling on youth suicide. We document three key findings. First, using data from the National Vital Statistics System from 1990-2019, we document the historical association between teen suicides and the school calendar. We show that suicides among 12-to-18-year-olds are highest during months of the school year and lowest during summer months (June through August) and also establish that areas with schools starting in early August experience increases in teen suicides in August, while areas with schools starting in September don’t see youth suicides rise until September. Second, we show that this seasonal pattern dramatically changed in 2020. Teen suicides plummeted in March 2020, when the COVID-19 pandemic began in the U.S. and remained low throughout the summer before rising in Fall 2020 when many K-12 schools returned to in-person instruction. Third, using county-level variation in school reopenings in Fall 2020 and Spring 2021—proxied by anonymized SafeGraph smartphone data on elementary and secondary school foot traffic—we find that returning from online to in-person schooling was associated with a 12-to-18 percent increase teen suicides. This result is robust to controls for seasonal effects and general lockdown effects (proxied by restaurant and bar foot traffic), and survives falsification tests using suicides among young adults ages 19-to-25. Auxiliary analyses using Google Trends queries and the Youth Risk Behavior Survey suggests that bullying victimization may be an important mechanism.

To be fair, one can find an economist preprint that shows literally anything. That’s because they cheat so much with the statistics. Is this paper also guilty of this? It seems not. The idea of the paper is simple enough. We consider the COVID school closures as a natural experiment in less schooling, and check if the suicide rates changed during the lockdown months versus other years. This method of course assumes that nothing else changed that is relevant. That’s a hard assumption to grant. Maybe COVID made kids fearful? After all, the media was full of fear mongering for years on end, and probably many students lost their beloved grandmother. This effect, however, would go in the other direction, i.e., cause more suicides, not fewer.

But let’s first look at the long-term trends: 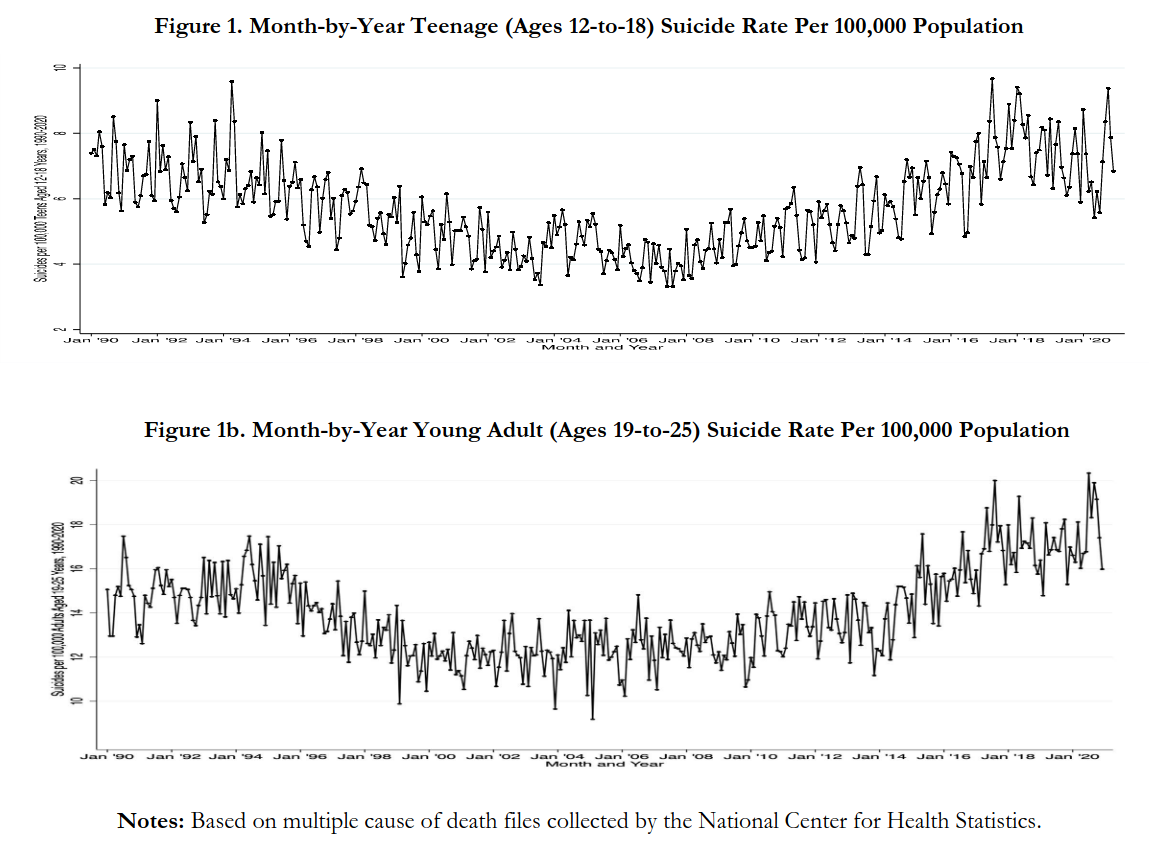 There are some nonlinear long-term trends in suicide rates of young people. They were lower in the 2000’s than in the 1990’s, and they have been rising since about 2015. That’s the same time the great awokening started, and since we see all sorts of other mental health issues increase since 2015 (see the end), that trend is not surprising. For the 12-18 group, there was also an increase seen from around 2008, which is the time of the economic crisis. The study here is really based on looking closely at the top figure in the 2020 period, where several months show a relatively big decline. These are the lockdown months. Is that noise or a real signal? Only statistics can tell us. We’ll get to that. The next piece of evidence of schools causing suicides are vacations: 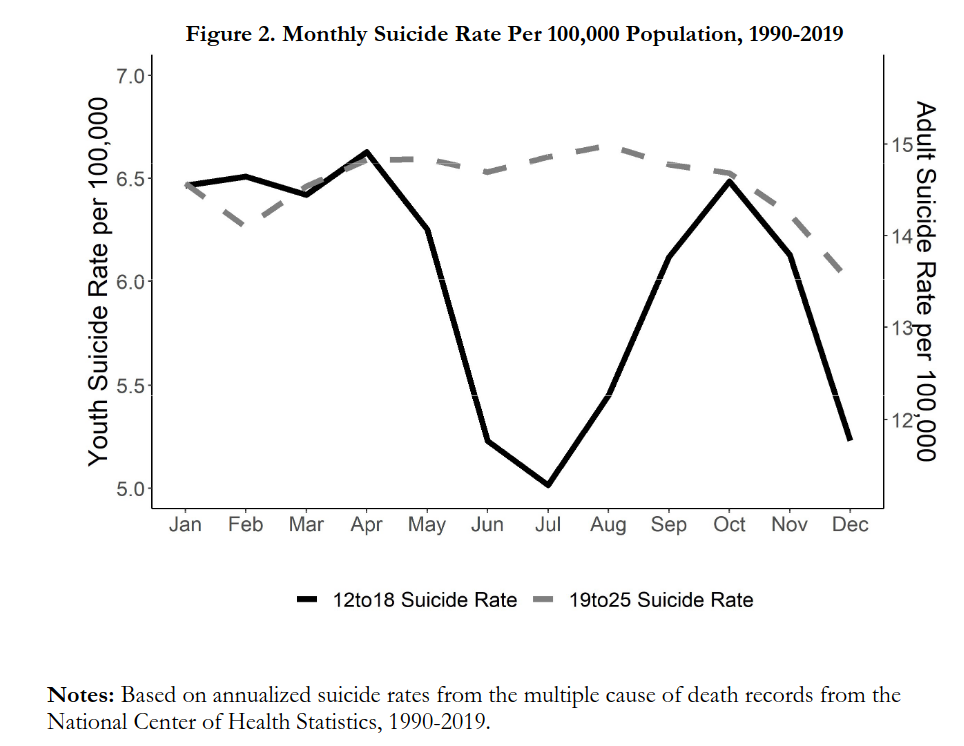 Note that these are the pre-COVID data. There’s a big drop in the summer vacation months. Of course, other things happen in the summer, but the contrast to the older students 19-25 is pretty strong. Note also the Y values. The decrease in the summer for the 12-18 year olds is from about 6.5 to 5, so a decline of 25%. We can also note that December shows a big decline, and of course, there is a long vacation in December as well (from 21st to Jan 3rd or so). If the data were more fine-grained, one would be able to look at shorter vacations, e.g. spring, Easter, and winter vacations, which I guess last about a week (in Denmark they do).

Why don’t the 19-25 year olds show a similar decline? Don’t older students have vacations in the same months? They do, but shorter. It’s not entirely a satisfactory answer. Maybe the fact that these students are able to take a lot of time off by not attending lectures plays a big part here. Or that they themselves chose this particular study, so find it more relevant than the younger students who are essentially conscripted.

Next up, the authors apply some fancy econometric methods based on local variation in school openings. Some start in August, others in September. Again, they find this is consistent with a causal role of school attendance on suicide rates for the teenagers. It’s getting difficult to think of a confounder that would also just so happen to be present in August in just the places where school starts a bit earlier. They present a plot based on months of the year, thus removing the year-to-year trends: 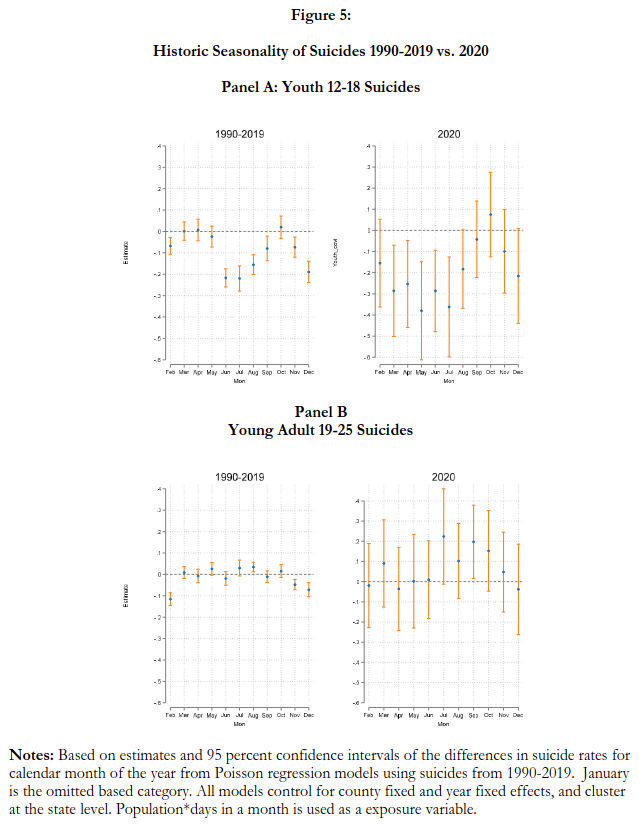 Here we see clearly how for the 12-18 group, 2020 is an outlier. Of course the error bars are big because suicides are rare. Clearly though, the months of March to May in 2020 are a big outlier in the negative direction. They go on to analyze other plausible indicators. What about parents searching for school bullying? 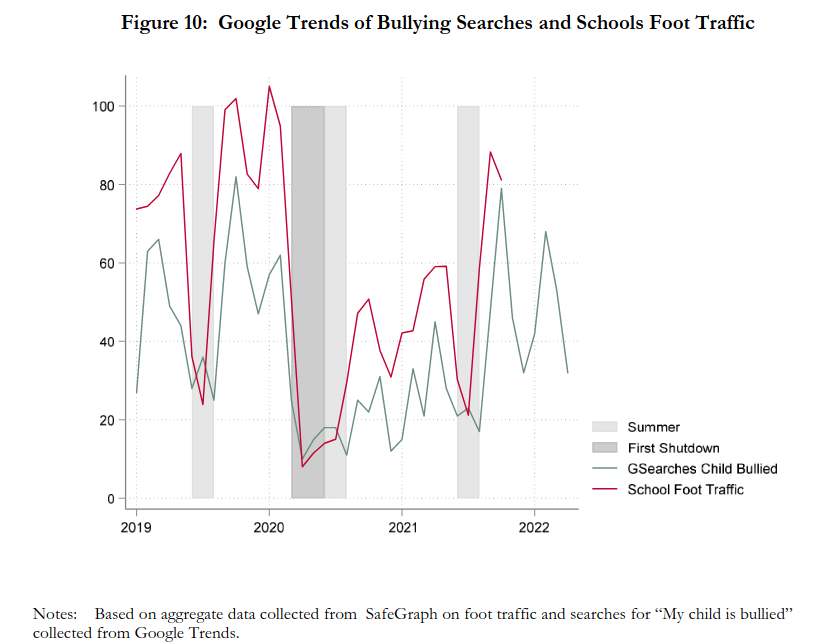 Again, a big decline during the 2020 lockdowns. School bullying is part of the package deal, though isn’t schooling per se. It’s probably causal for suicides as humans are very sensitive to being socially ostracized.

From a statistical perspective, what we care about is the interaction of month by 2020, which is the effect of lockdowns. Are these far beyond chance levels? Yes: 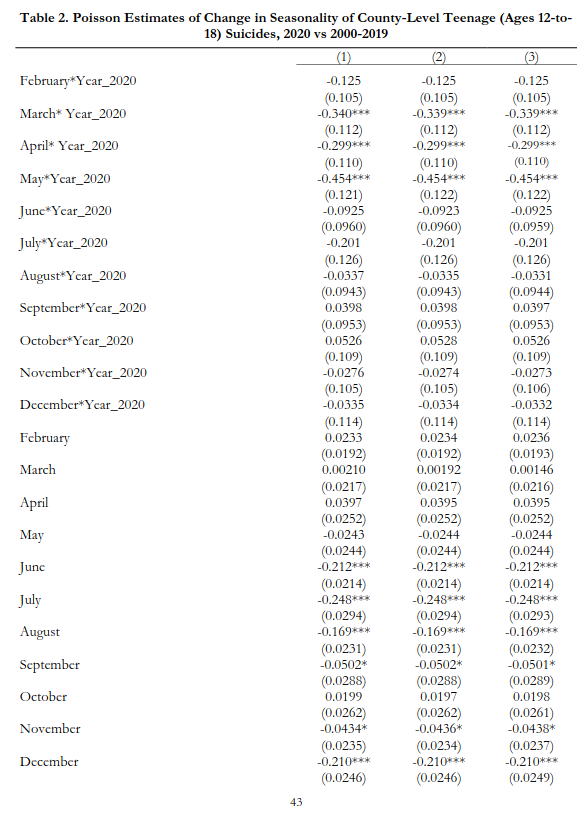 Statistically, it’s hard to complain. The interactions for the months are at p < .01 level for just the 3 months with lockdowns: March through May 2020. This model included controls for county, year, and county*year, so they control for anything that doesn’t change across counties, years, and anything changing by their combination too.

Their proposed direct measure of school attendance is looking at smartphone GPS data. Some people allow collection of anonymized location data from their phones which can be used to track where people are in the aggregate. This gives them their “foot traffic” measure, which is a measure of how often smartphones were observed at kindergartens and schools. So insofar as children bring their phones to school, this works as a direct measure of when kids are at school. And they find that this predicts suicides too:

They threw in a negative control: restaurants. Whether people are at restaurants or not shouldn’t affect suicide rates too much, and they don’t see any signal for that variable.

They have also tried controlling for all sorts of other things like COVID death rates and what not, but it didn’t really affect things much.

Let’s begin with the authors’ own conclusions:

Lastly, our results should not be interpreted as supporting a policy of school closures to reduce youth suicide risks. There are substantial long-term benefits to education, including, but not limited to, higher earnings, improved health, and reduced criminality. A growing body of research shows school shut-downs had many other adverse spillover effects including decreases in human capital acquisition for children (Bacher-Hick et al. 2021, Halloran et al. 2021; Kofoed et al. 2021) and reduced attachment to the labor force for married mothers (Hansen, Sabia, and Schaller 2021). Moreover, it is possible that the average student saw decreases in her/his mental health due to school closures, and only a small, but important, subset of the most vulnerable saw improvements due to the stress than in-person schooling created for them. Indeed, analyses of real-time hospital surveillance data by Yard et al. (2021) suggests suicide attempts rose by 50 percent among young women during the pandemic. Meanwhile, self-reported major episodes of depression rose among both youth and young adults (see data from the National Survey on Drug Use and Health in Figure A6). Rather our research shines a light on the continued need for more research on youth mental health and deeper investigation why it declines for some students when school is in session. Likewise, future research and policy could focus on the determinants and consequences of bullying victimization, and the role that other policies — such as access to mental health care and safe storage of guns — could play in reducing these risks.

Clearly, this cost-benefit argument depends on those benefits to schooling being real. The various school reforms in England analyzed by Gregory Clark suggests that this is not so, and national reports from Denmark and Sweden agree with this assessment. Bryan Caplan’s The Case Against Education provides a good overview of the negative evidence regarding the benefits of schooling. Briefly, students forget most of what they learn anyway, what they learn isn’t useful in real life, and the standard studies of returns to schooling are heavily biased by self-selection of people who get more education.

The Yard suicide attempt study is interesting. I tried making sense of it, but it’s difficult to follow their charts. It seems hard to understand how actual suicides can be sharply declining, but suspected attempts go up. Maybe the media talk about COVID suicide and depression made people more apt to report suspicious behavior where actually there was a decline. This kind of thing is not so implausible because we see the same thing with racism. Woke media focus on race bias makes people report a lot more of it, but historically, race bias against non-Whites is at a historical low.

The way forward for this research question as I see it:

Overall I find this a quite convincing study. The mechanism is easy to understand: school really is forced make-work. The statistics are not very p-hacked. I can’t think of any plausible alternative explanations for the results. Only I would like to see some more school closure periods analyzed. 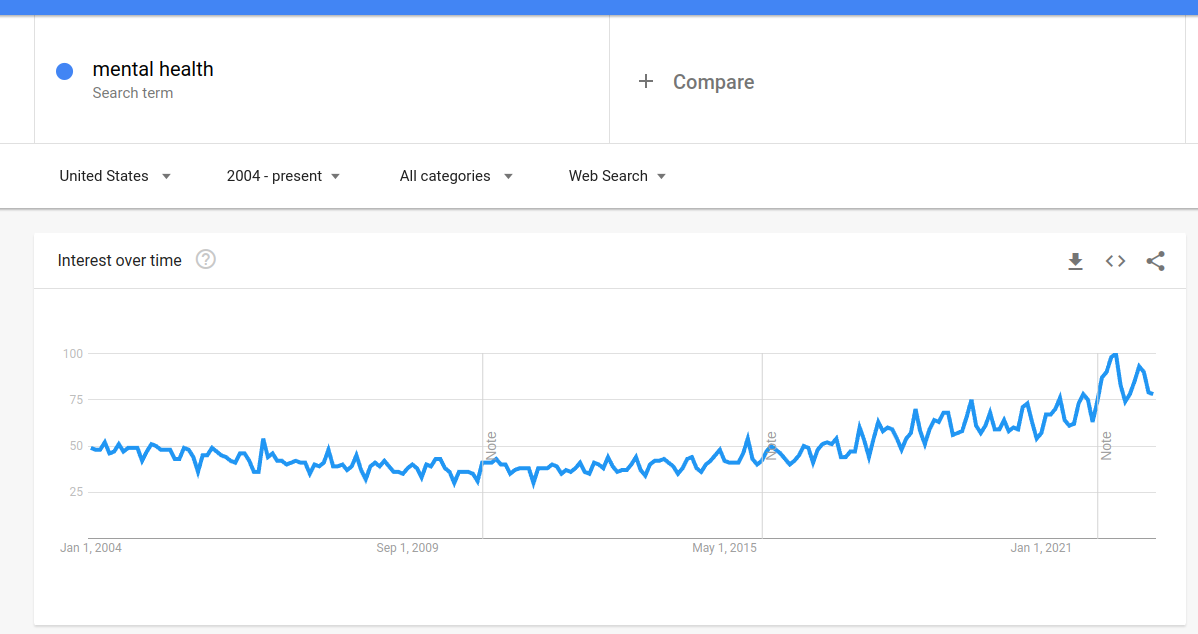 Paper out (some time ago): Are Headstart gains on the g factor?: A meta-analysis