Just a quick post to summarize or reference the evidence for various claims and mistakes I made.

I should have done a post on this as well instead of spending so much time replying in the comments. Oh well. From now on I’ll just do a commentary post whenever I give an interview. I don’t like making strong claims without citing sources.

Randomization and decentralization in politics

See: Uncontrolled: The Surprising Payoff of Trial-and-Error for Business, Politics, and Society by Jim Manzi.

Unfortunately, no one has written a review of this literature. Most of this research has been done by me (± colleagues), so I will be probably also be the one that has to do it.

The most interesting studies:

I have many more datasets no analyzed yet, or not published. I lack time to do so. If you want to help and have some writing skills, get in touch! I can provide guidance (also with R), but you will have to put in some work and learn stuff.

Study can be found here.

Other results can be found in our big Admixture in the Americas study.

Regression towards the mean

I wouldn’t call myself a nationalist. Generally, I think nationalists has a very feely approach with strong emphasis on group membership, songs, flags. That stuff does not appeal to me. However, I do like nation states.

Nothing came out of our efforts to find Iranian IQ data by subgroup or region so far, but see: https://westhunt.wordpress.com/2016/02/21/iran/

Would be nice to find someone who reads Persian/Farsi well, so we could look for good quality data. Iran has many subdivisions one can use: https://en.wikipedia.org/wiki/Administrative_divisions_of_Iran

These were collected by Richard Lynn. He has spent several decades compiling several hundred studies of IQ in almost all countries in the world. The results from these are consistent with other sources of data such as PISA, TIMSS, OECD skills and thus hard to deny.

It does surprise many that the average world IQ is about 85. It’s an unfortunate fact of history that 100 IQ was set to the European norms, as this makes everybody else seem dull. Rather it’s Europeans who are relatively smart. The figure below shows the distribution of country IQs from Lynn’s dataset. 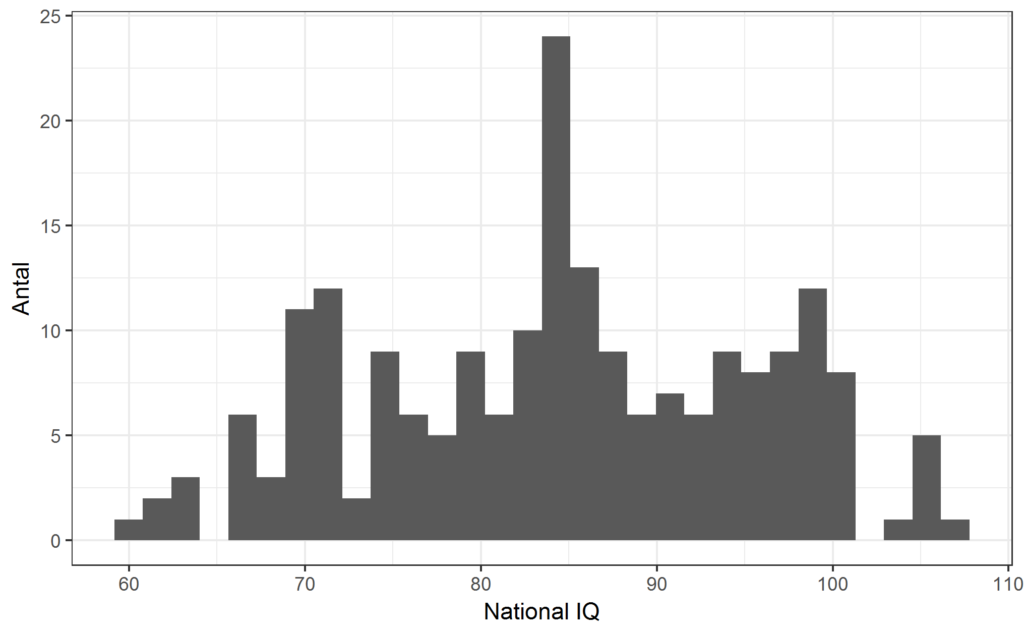 I accidentally gave the wrong numbers for the Danish IQ from PISA. It is 97-99, not 87-89! I frequently mess up the English numbers because the Danish numbers are named backwards, so it’s hard to translate. When we say 97, syvoghalvfems, syv-og-halvfems, this is literally 7-and-90 instead of the sensible forward pattern: 90-(and)-7.

Various papers on this topic, often of low quality. This one seems decent:

More good quantitative comparative research needed on this topic. Most research is based on meta-analyses which have various problems. Better to use one big longitudinal dataset. If not possible, then one big cross-sectional dataset (since we know the traits are quite stable, there cannot be much reverse causation).

Genetic enhancement for ‘us’

One commenter mentions that:

When you say that we should enhance ourselves genetically, I think you need to clarify that what you mean by ‘ourselves’ is directed generally at the human species as a whole and not to individuals. Some of the commenters seem to think they can take a pill and make genetic changes. These are changes that are not available for “us.” Genetic changes require generations. Anyway, I’m not a biologist but it seems like common sense that you cant just take a pill and grow blue eyes and no heart disease.

Direct engineering (CRISPR etc.) can be done on adults, but embryo selection will only work for the next generation. It’s an open question of how much effect it will have to modify the genomes of adults. I suspect that the answer is unfortunately not so much’ except for some genetic diseases (and cancer), but I hope to be surprised. :)

It is possible to estimate this by looking at the expression of the genes we find to be associated with intelligence. Most of these seem to be expressed in utero, making it unlikely that they will affect adults if changed.

If we succeed in making this kind of technology work, it will literally be a humbling experience: the current generation of bright researchers will be dull compared with the future average population.

A popular idea among white nationalists is that there is some white genocide. Apparently, this idea comes from interpretation of some overly broad UN definition. It’s not a real thing, no one is killing whites in large numbers. Rather, whites are failing to reproduce, exactly like Pandas (pandacide).

My comments with regards to fertility and HDI are based on this figure: 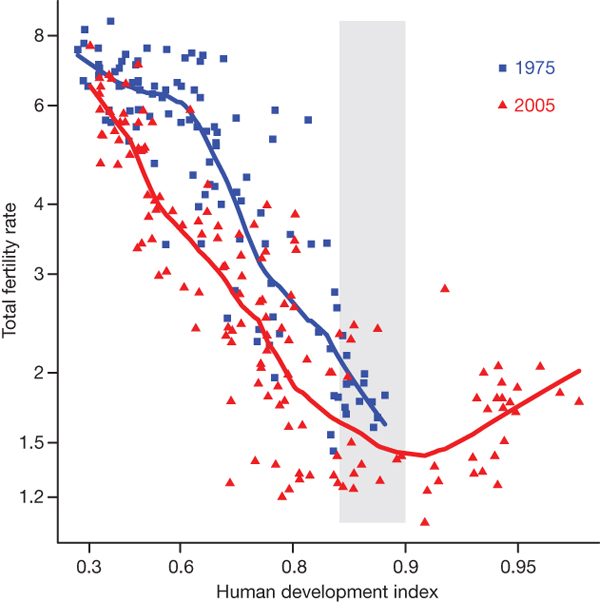 It’s from this Nature letter. Last data from 2005 here, but here’s a newer version:

(can’t find it right now, but shows the same pattern holds in 2015 data)

How to learn a lot

Read a lot. You can get inspired by reading my book list on Goodreads: https://www.goodreads.com/review/list/8884040?shelf=read