I oppose coercive eugenic policies, so don’t try to quote mine my blunt discussion as support for such policies.

Hollywood has a new anti-eugenics movie out, called The Thinning. There’s a trailer, and it will likely spoil the entire movie for you, but I reckon it will be crappy anyway, so:

For those too lazy to watch, it goes like this. To avoid dysgenics/Idiocracy, every generation has to take some standardized IQ/SAT-like test, and those who do very poorly on it, we execute. The movie is set in a near-future society where we used up a lot of the natural resources, so there’s also a need to keep the population size down (apparently the makers don’t realize this automatically happens due to below replacement fertility in every European country). There’s also some corruption going on with the testing. Of course, the protagonists are some of those deemed unfit, and naturally they don’t want to get executed, so they go on the run. The movie is essentially a new Gattaca.

In the light of this, it seems in order to actually read what the actual eugenicists said. Why don’t we begin with Galton, the originator. Here’s Galton writing on eugenics in 1904 in his paper :

5. [the 5th aim] Persistence in setting forth the national importance of eugenics. There are three stages to be passed through: (I) It must be made familiar as an academic question, until its exact importance has been understood and accepted as a fact. (2) It must be recognized as a subject whose practical development deserves serious consideration. (3) It must be introduced into the national conscience, like a new religion. It has, indeed, strong claims to become an orthodox religious, tenet of the future, for eugenics co-operate with the workings of nature by securing that humanity shall be represented by the fittest races. What nature does blindly, slowly, and ruthlessly, man may do providently, quickly, and kindly. As it lies within his power, so it becomes his duty to work in that direction. The improvement of our stock seems to me one of the highest objects that we can reasonably attempt. We are ignorant of the ultimate destinies of humanity, but feel perfectly sure that it is as noble a work to raise its level, in the sense already explained, as it would be disgraceful to abase it. I see no impossibility in eugenics becoming a religious dogma among mankind, but its details must first be worked out sedulously in the study. Overzeal leading to hasty action would do harm, by holding out expectations of a near golden age, which will certainly be falsified and cause the science to be discredited. The first and main point is to secure the general intellectual acceptance of eugenics as a hopeful and most important study. Then let its principles work into the heart of the nation, which will gradually give practical effect to them in ways that we may not wholly foresee. [my emphasis]

So we can note a few things:

First, Galton is essentially arguing for a humane eugenics, not executions etc. In fact, Galton warned against “overzeal” that “would do harm” and “cause the science to be discredited”! Probably did not imagine the horrors of Nazi extermination policies, but it’s a nice warning given what actually happened. The related science still suffers from the discreditation that followed the horrors of Nazism. For the purposes of improving the gene pool, it is not necessary to kill anyone.

Before reproductive genetics, it was sufficient to alter the rates of breeding. This can be done in many ways and does not necessarily have to involve coercive sterilization policies. One could pay people with better genes to have children or pay people with bad genes to not have children. Payment need not be direct, but could be done via tax exemptions and so on. Luckily for us, the speed of dysgenics has been slow, and so we probably don’t need to do anything authoritarian or even economic, and we can just promote the use of embryo selection and genetic engineering.

The Nazi program to kill genetically defective Germans seems to have been aimed, in part, at opening up hospital space for the injured their warring would create. For a history on eugenics, I recommend reading Eugenics and the Welfare State: Sterilization Policy in Denmark, Sweden, Norway, and Finland. Curiously given the modern political climate, eugenic laws were generally implemented in Scandinavia by progressive, social democrats (left-wing), and was opposed by religious conservatives. After all, eugenics is about improving the gene pool, so it’s a collective matter. Eugenic policies go hand in hand with welfare states. If one has too many people that has to be taken care of due to genetic defects (e.g. the blind), then welfare policies are not possible.

Second, the part about races is not literally about Europeans/Caucasians, Asians, Africans etc., but in the more loose historical sense of “the race of man”. I’ve read a number of Galton’s works and it’s not my impression that he was advocating for Earth to be inherited by essentially one racial group, which would be an extreme version of racial supremacy politics. At least, that’s my understanding of his views.

Third, the text reflects Galton’s idea of imbuing eugenic aims into religions so as to have people follow the principles. To most people today this seems weird, but in the early 1900s when the world was much more religious, it seemed more reasonable. We can also note that many religions and cultures did ban marriages between closely related people, especially nuclear family (siblings, parent-offspring). This prevents inbreeding, so it is eugenic. Of course, other religions and cultures promoted (first) cousin marriages which are quite bad in terms of inbreeding problems. 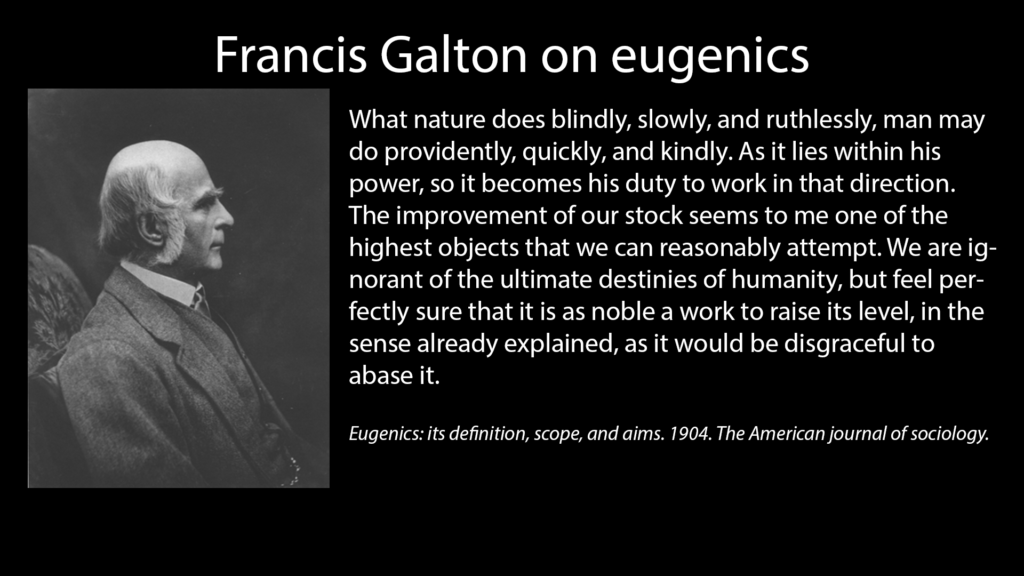