Some guy on SSC:

I remember hearing somewhere that the IQ of the mother is what determines the IQ of the children. Is this accurate? To what extent does the father’s IQ determine the child’s IQ? Does it vary for boy/girl children?

A while ago there was some big media attention to some study that supposedly found that IQ is transmitted via the mother only or mainly. Here’s a random newspaper that ran the story, The Independent:

A mother’s genetics determines how clever her children are, according to researchers, and the father makes no difference.

Women are more likely to transmit intelligence genes to their children because they are carried on the X chromosome and women have two of these, while men only have one.

But in addition to this, scientists now believe genes for advanced cognitive functions which are inherited from the father may be automatically deactivated.

Since both media and scientists like to pick weird/improbable findings to publish, we should be quite skeptical of such claims in general. Looking over the source on the blog the newspaper is quoting, most of the studies are quite old or has to do with Mendelian disorders. The model is basically that since mothers always (except for the odd case of UPD perhaps) transmit an X to their offspring, they share a larger fraction of their genome with their sons than do fathers. This is because the X chromosome is 2.7 times longer, has 27 times more variation (not a typo), and 5.5 times more protein-coding genes than the Y chromosome (human genome). Furthermore, imprinting effects (epigenetics), though rare, means that sometimes it does matter which origin a given variant has, most often seen in a few obscure disorders. In this case, we can be all the more skeptical because the mechanisms of genetic transmission are quite well-understood, and this pattern is highly unlikely given knowledge that these kinds of traits are highly polygenic and spread fairly uniformly across the genome (judging by SNP hits).

One doesn’t have to rely on plausibility arguments since familial correlation data are available. Perhaps because of the lack of ‘fancy’ findings, researchers seems to have stopped generally reporting and compiling correlations by sex decades ago. However, I found some reviews.

These papers are simple meta-analysis papers that calculate the weighted mean correlation by various subgroups. In a few tables (first is from Paul, other two from Bouchard & McGue): 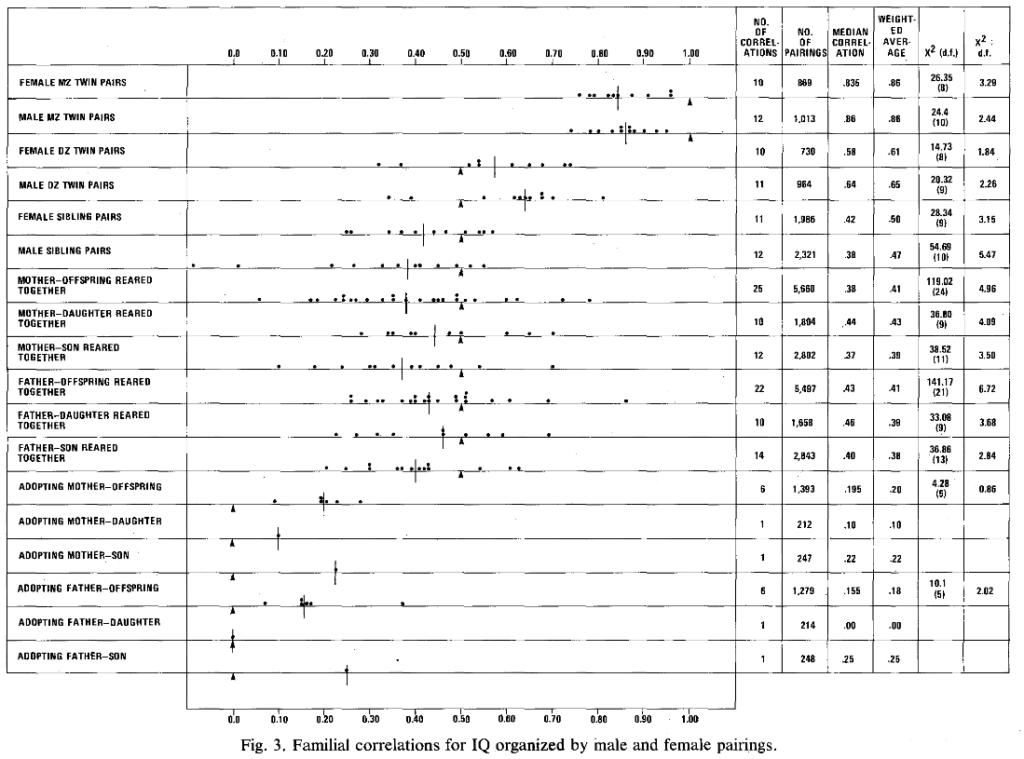 To sum up the sex-related findings:

These conclusions are all based on large n meta-analysis, so cannot be expected to be much off.