Someone sent me some questions on this study:

I don’t recall reading it before, but I can see why environmentalists would love it. It has 44 citations according to GScholar.

So, it’s an “equality of opportunity” argument. The basic idea doesn’t even pass the smell test. US Black-White IQ gap has been about constant for ~150 years (see figure), including with the advent of the internet and public libraries. Obviously, anyone who wants and is able to to learn stuff can very easily do so on the internet for free too. Yet the racial gaps stay the same. So, we know already that access to information is not a big independent factor. Rather, exposure to information is something that comes from within — smarter and more curious people seek out exposure to information. It’s textbook active gene-environment correlation.

The paper has a few fairly obvious methodological errors, aside from the small samples in some of their substudies (n’s = 77 students, 65 students, 86 students, 223 students). One of the more obvious ones is that they disregard group factors and differences in them. If we control for item performance on tests with “specific knowledge”, the group difference on other items may be zero, or it may not. It depends on various things like the g-loading of the “specific knowledge” items, measurement error, group differences on whatever abilities underlie performance on these kinds of items. Blacks have been found to have an advantage on some memory tests, for instance, when controls for g, indicating some advantage on non-g abilities related to that. See e.g.:

where they report group differences of: 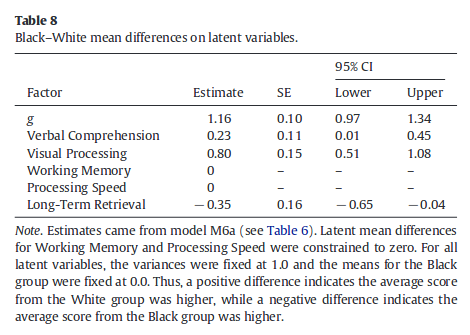 These are from a bi-factor model, so the non-g gaps are independent of g (~same as controlling for g in a hierarchical model framework). We see that Whites seem to be quite a bit better at visual processing (d = 0.8) and maybe on verbal comprehension (d = 0.23), while Blacks did somewhat better on long-term retrieval (d = -.35). The latter two are quite uncertain (confidence interval is wide and close to 0).

The general issue with papers like Fagan is that they attack a strawman, namely that Black-White gap is IQ is solely due to gap in g factor. Here’s Jensen in 1985:

For the sake of precision, Spearman’s hypothesis should be stated in two forms that can be termed strong and weak, respectively, although Spearman himself did Black-white difference not suggest this distinction. The strong form of the hy­pothesis holds that the magnitudes of the black-white differences (in standard score units) on a variety of tests are directly related to the tests’ g loadings, because black and white populations differ only on g and on no other cognitive factors. The weak form of the hypothesis holds that the black-white difference in various mental tests is predominantly a difference in g, although the populations also differ, but to a much lesser degree, in certain other ability factors besides g.

Jensen has never subscribed to the strong form as far as I know, and indeed in his 1985 (!) study, he wrote that:

A study of the national standardization sample of the WISC-R (Jensen & Reynolds 1982), based on 1,868 white and 305 black children, bears out Spearman’s hypothesis but contradicts it in its strong form, because significant, but small, black-white differences were found on other factors besides g. When the WISC-R is subjected to a Schmid-Leiman hierarchical factor analysis, it yields four factors that are virtually identical for both populations: g, verbal, spatial, and memory. When factor scores on each of these four factors are computed for every black and white subject, the populations show significant mean differences on all four factors, a finding that contradicts the strong form of Spearman’s hypothesis. But the weak form is strongly upheld, as the g factor accounts for more than seven times as much of the between-population variance as the other three factors combined. Black testees exceed white testees on the Memory factor (0.32o-), whereas white testees exceed black testees on the g (1.14cr), Verbal (0.20rr), and Performance (0.20cx) factors.