While reading an obscure books review by Rushton, I came across an interesting claim:

[and an essay by] the first president of the American Sociological Society, Charles Cooley, which contains the original use of the analogy about “same seeds in different soils” to favor environmentalism.

The book Rushton is talking about is:

Libgen has us covered for this one, and in the source in question:

My view of the relation between genius and the social order may perhaps be made clear by the following comparison: Suppose a man, having plowed and cultivated his farm, should take in his hand a bag of mixed seeds — say wheat, rice, Indian corn, beans, and others — and should walk straight across his land, sowing as he went. All places on his path would be sown alike: the rocks, the sandy ground, the good upland soil, the rich mold in the hollows, the marshes, and whatever. other sorts of soil there might be. All would be sown alike, but there would be a great variety in the result when harvest time came around. In some places nothing would come up at all. In the sand perhaps only the beans would flourish, in the marshes only the rice, and so on; while some generous soils would allow a variety of plants to grow side by side in considerable vigor. Something like this, I think, is the case with a stock of men passing through history. A good stock probably produces remarkable children with comparative uniformity, but of these only a few become famous men, and these few, instead of being evenly distributed, appear in groups, now of one sort, now of another, now of several sorts.

On the whole it seems to me that the relation between genius and fame is fairly well represented by the comparison, suggested at the outset, of a farmer sowing mixed seeds in a furrow which traverses a great variety of ground. Here many come up and flourish, there none, and there again only those of a certain sort. The seed-bag is the race, the soil historical conditions other than race, the seeds genius, and the crop fame. It is true that knowing so little as we do of the forces governing heredity and degeneration, we cannot be sure that the seeds are sown with anything like uniformity, that the amount of natural ability produced from a given stock is approximately constant. But this is certainly the simplest supposition, and it would seem reasonable to accept it until the contrary is shown.

Which is not quite the same as the one Lewontin used, but it is obviously the same general analogy. Lewontin has in fact never cited this journal article, only hereditarians have cited it (Rushton, twice). One can see this on Google Scholar citation analysis. So, perhaps Lewontin is guilty of plagiarism. Or perhaps he had the same idea independently. Or maybe he read about it somewhere and forgot the original source and thus was unable to cite it (and didn’t think it was important enough to search for it). The latter two options have some plausibility because Lewontin did some writing on agriculture in a typical Marxist way (“The maturing of capitalist agriculture: farmer as proletarian”).

Lewontin first mentioned this in 1970, and cited no sources in his polemic straw man attack paper:

Let us take two completely inbred lines of com. Because they are completely inbred by self-fertilization, there is no gen­etic variation in either line, but the two lines will be genetically different from each other. Let us now plant seeds of these two inbred lines in flower pots with ordinary potting soil, one seed of each line to a pot. After they have germinated and grown for a few weeks we will measure the height of each plant. We will discover variation in height from plant to plant. Because each line is completely inbred, the varia­tion in height within lines must be entirely environmental, a re­sult of variation in potting con­ditions from pot to pot. Then the heritability of plant height in both lines is 0.0. But there will be an average difference in plant height between lines that arises entirely from the fact that the two lines are genetically dif­ferent. Thus the difference be­tween lines b entirely genetical even though the heritability of height is 0!

Now let us do the opposite ex­periment. We will take two handful from a sack containing seed of an open-pollinated variety of com. Such a variety has lots of genetic variation in it. Instead of using potting soil, however, we will grow the seed in vermiculite watered with a carefully made up nutrient, Knop’s solution, used by plant physiologists for controlled growth experiments. One batch of seed will be grown on complete Knop’s solution, but the other will hare the concentra­tion of nitrates cut in half and, in addition, we will leave out the minute trace of zinc salt that b part of the necessary trace ele­ments (30 parts per billion). After several weeks we will measure the plants. Now we will find vari­ation within seed lots which is entirely genetical since no envi­ronmental variation within lots was allowed. Thus heritability will be 1.0. However, there will be a radical difference between seed lots which is ascribable en­tirely to the difference in nutri­ent levels. Thus, we have a case where heritability within popula­tions is complete, yet the differ­ence between populations is en­tirely environmental! 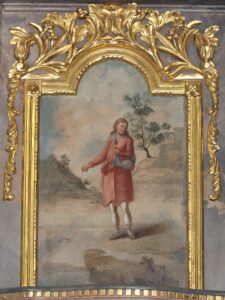 I found an earlier version in Thoday (1969), but I've never seen evidence that Lewontin was aware of it.

The Cooley (1897) is clearly reminiscent of the parable of the sower in the New Testament.

In the story, a sower sows seed and does so indiscriminately. Some seed falls on the path (wayside) with no soil, some on rocky ground with little soil, and some on soil which contained thorns. In these cases the seed is taken away or fails to produce a crop, but when it falls on good soil it grows, yielding thirty, sixty, or a hundredfold.

Jesus then (only in the presence of his disciples) explains that the seed represents the Gospel (the sower being anyone who proclaims it), and the various soils represent people’s responses to it (the first three representing rejection while the last represents acceptance).

13That same day Jesus went out of the house and sat beside the sea. 2Such great crowds gathered around him that he got into a boat and sat there, while the whole crowd stood on the beach. 3And he told them many things in parables, saying: “Listen! A sower went out to sow. 4And as he sowed, some seeds fell on the path, and the birds came and ate them up. 5Other seeds fell on rocky ground, where they did not have much soil, and they sprang up quickly, since they had no depth of soil. 6But when the sun rose, they were scorched; and since they had no root, they withered away. 7Other seeds fell among thorns, and the thorns grew up and choked them. 8Other seeds fell on good soil and brought forth grain, some a hundredfold, some sixty, some thirty. 9Let anyone with ears listen!” 10Then the disciples came and asked him, “Why do you speak to them in parables?” 11He answered, “To you it has been given to know the secrets of the kingdom of heaven, but to them it has not been given. 12For to those who have, more will be given, and they will have an abundance; but from those who have nothing, even what they have will be taken away.