Since people keep asking about my results on such tests, and because my position has been misrepresented (e.g. by Les Temps).

There’s a lot of political tests online one can take, but some are more popular than others, and sensible. A popular choice is the libertarian-made, The World’s Smallest Political Quiz, a 10 item quiz based on the Nolan chart 2 dimensional representation of politics. 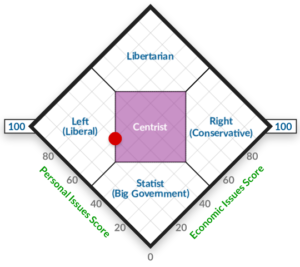 The RED DOT on the Chart shows where you fit on the political map.
Your PERSONAL Issues Score is 60%
Your ECONOMICS Issues Score is 30%
According to your answers, the political group that agrees with you most is…
Centrist
Centrist prefer a “middle ground” regarding government control of the economy and personal behavior. Depending on the issue, they sometimes favor government intervention and sometimes support individual freedom of choice. Centrists pride themselves on keeping an open mind, tend to oppose “political extremes,” and emphasize what they describe as “practical” solutions to problems.

My score on this have changed over the years, ironically, towards more leftism away from libertarianism. The changes concern my views on government interventions in markets, where I’ve become more open to the idea, mostly as a result of increasing disbelief in mainstream economics (e.g. due to reading Debunking Economics).

A similar test is that by IDR labs which has 36 questions instead of 10: 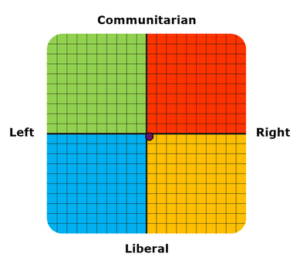 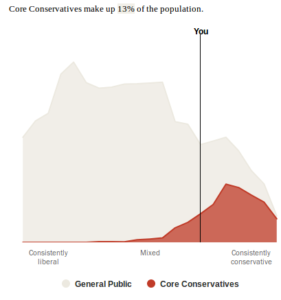 This overwhelmingly Republican group holds conservative attitudes across a wide range of issues, especially in their support for smaller government. Core Conservatives are deeply skeptical of the social safety net and favor lower tax rates on corporations and high-income individuals. While they are divided on whether immigrants do more to strengthen or burden the country, Core Conservatives offer far more positive views of immigrants than do Country First Conservatives. Core Conservatives are relatively upbeat about national conditions and a majority says that the United States “stands above” all other nations in the world.

This test had a lot of questions related to group differences (race, sex), which is probably why the right-leaning result happened.

PolitiScales is an 8-scale test based on 117 questions. It’s kinda too long. 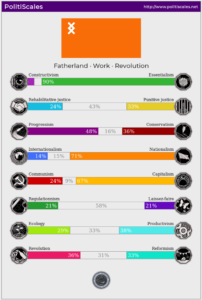 Like the one above, I affirmed all the HBD questions hence the high score on ‘essentialism’. Justice questions concern basically regards for prisoners vs. regards for victims, in particular, relative focus on rehabilitation vs. punishment. Their framing were poor, so I mostly clicked agnostic option. Their questions about nationalism mostly concern stuff about immigrants, not so much the war-like national-expansionism type that many abhor. The questions on environment were somewhat unclear, so I usually clicked agnostic.

Another odd test is the 4 dimensional by 8values. 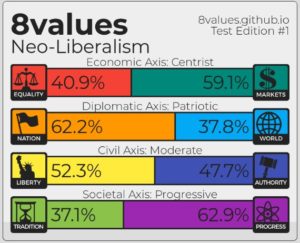 A neoliberal! I guess maybe if we change the definition to that given by Sam Bowman.

Then, there’s another 2 dimensional test called the Political Compass, which has 42 items, mostly US-centric: 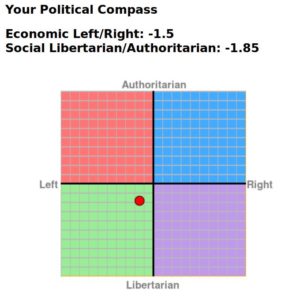 Luckily, it produced quite similar results to the other 2, so at least there’s some inter-test reliability.

Bonus: views of my bubble

We have a private group for discussion of HBD matters and general freethought. People range from professors to random normal wage slaves who developed an interest. It’s pretty international, having a variety of Scandinavians (basically my Danish HBD cluster), US citizens (every race or so, think we’re still missing an Indian), various other Euros, Chinese Chinese and what various in betweens. I posted the 10 item test above, and this is the distribution of the group: 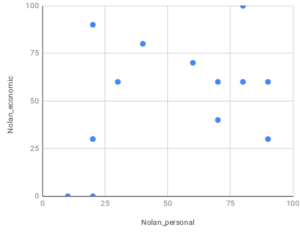 The summary stats are: n = 14, economic mean/sd 56/33, personal mean/sd 54/30. So it’s pretty dead center with a wide range of basically everything except it seems a hardcore anarcho-communist (bottom right). So I’m pretty happy with my bubble!

The Guardian – How populist are you? 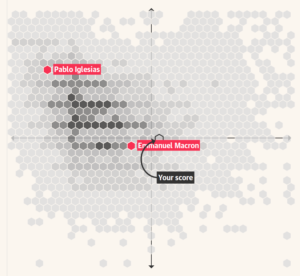 Well, nothing new there.

As reviewed in the recent book review on Eysenck on politics and psychology. There is a now an online version of this test. 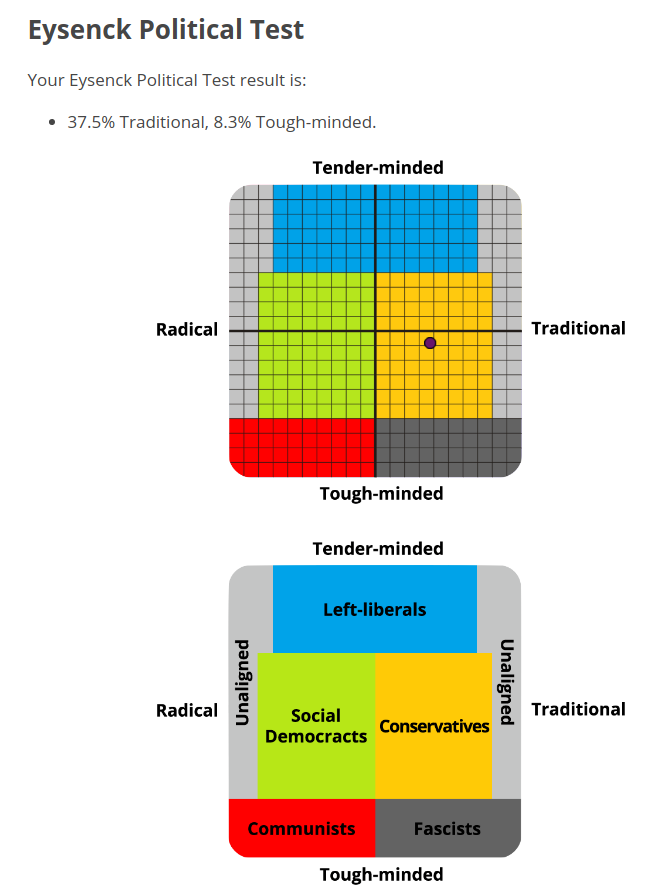