Some years ago, I discovered the Swiss dataset used in R. It has data from the late 1800s of Swiss subnational units, 47 French speaking ‘provinces’ i.e. sub-canton level (probably districts). One can find the documentation here. What caught my eye was that they had test data from the army examinations going back to 1870s, i.e. before Binet invented ‘the first’ IQ test in 1904 or so. If one follows the source to van de Walle 1980, we find this description:

As in a few other European countries, military recruits in Switzerland were given literacy tests during the annual draft. Exams for draftees were first introduced in 1843 in the canton of Solothurn in an effort to interest the working classes in their self- improvement and to fight illiteracy. By 1875 when recruiting became a federal prerogative, exams were being given in 14 cantons but were not standardized. The Con- federation made them mandatory and uniform. From then on, the exams provided an objective ranking of the educational level of cantons and districts.

Young men were examined (in their mother tongue) on their ability to read and write and on their skills in composition, arithmetic, history, and geography. For each exam, the recruits received a grade ranging from I to 4 (up to 1880) or 5 (thereafter). Grade 1 reflected excellence and grade 4 or 5, complete ignorance. In addition, information was recorded on the extent of the draftee’s education beyond the primary level.

Throughout the last quarter of the nineteenth century and into the early years of the twentieth century, these exams were “the symbol of the ambitions of the Confederation in matters of culture and enlightenment.”9 The avowed objective of the federal military exams was to test the educational quality of cantonal primary schools. Accordingly, the exams generated great competition among the cantons and provided a strong incentive to improve education. Greater emphasis was placed on secondary education, and a variety of schools were created for those who had quit after the primary level. After 1890, schools for boys aged 15 and 16 were opened in most cantons; classes were given at night or during the winter, for three to six hours a week or at least 40 hours a year. During the semester preceding the draft, boys attended preparatory schools for draftees, which were compulsory in some cantons.

The data on draftees’ examinations have the advantage of referring to a population belonging to a precisely defined age group-namely, young men before the start of their reproductive years. They are available between 1875 and 1913, and they provide a sensitive description of the educational level of the Swiss population during the period of sustained decline in marital fertility. Their principal disadvantage is that they relate to the male population only. No comparable information exists for females; however, it is plausible that the data on male recruits reflect the quality of education available by district. Compulsory education up to age 14 applied to both sexes from 1874 on, although in Switzerland as elsewhere in the Western world, attendance was higher among males than females.

So, despite the tests sometimes called referring to as an education measure, or a literacy measure, they were quite broad and is more like a modern achievement test taken at the end of school, like the Dutch CITO, or Kaufman Test of Educational Achievement. These are known to very good measures of general intelligence, r = .80 or so.

In trying to find out more about these tests, and preferably some actual individual level data, I found an obscure history book about early attempts at making cross-national educational testing comparable: An Atlantic Crossing? The Work of the International Examination Inquiry, its Researchers, Methods and Influence. The book isn’t on LibGen yet, but we can read some of it via Google Books. In particular, from the introduction: 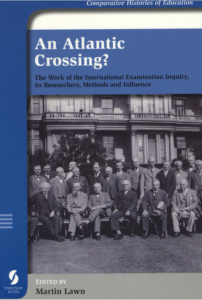 The work of the International Examinations Inquiry (1E1) is almost forgotten now and yet it was an international and well-funded scientific project, operating over seven years, which attracted key world figures in educational research and undertook significant exchanges of data and experiment. Originally, it comprised the USA, Scotland, England, France, Germany and Switzerland, and then it grew to include Norway, Sweden and Finland. The core research group met three times: in Eastbourne in 1931 and Folkestone in 1936 (both in England) and Dinard, near St Mato (in France), in 1938. The key problem which united the researchers was the expansion of secondary education and the determination of the most effective way of examining pupils for entry into the secondary school. Each of the national case studies tried to produce information which could help, nationally or internationally, to support changes or improvements in examining — from intelligence tests to essay marking (Appendix I). The value of the MI is that it reveals the difficulties that historians of education have in chronicling the exchanges of scientific ideas and researchers who work across borders. In this project, psychologists and comparativists can be seen in the task of engaging with each other’s work, and providing supportive and necessary conditions for these exchanges, and in turn effecting On international space, at the same time as they are producing a national one.

So it appears that:

Bonus: if we look at the list of names involved, we aren’t that surprised:

There’s even a bunch of Swedes and Norwegians I haven’t heard of.

A libgen copy of the book has materialized. Also, there are 2 academic reviews of the book.

Seems like the interesting progress was cut short by the usual suspects:

In retrospect the timing of the IEI could not have been worse, coinciding with the rise of fascism and the threat of a new world war. The three-man German delegation, committed to the central concept of German academic culture, Bildung – the release of innate potential within individuals–lost their positions when Hitler came to power. A Norwegian representative, later a resistance member, committed suicide after his arrest rather than betray the movement. This human dimension breathes life into the educational issues the book deals with and engages the reader’s interest.

Given the intervention of war, it is not surprising that the IEI research did not bear fruit until after 1945. The tripartite school system, with intelligence testing to select students, and examination reform in England have their origins in the IEI.New research institutions in Scotland, Sweden and England were funded in part by IEI Carnegie money. Norway’s final IEI report, published as late as 1961, confirmed its belief that its examination system was valid and reliable, a simplistic faith later shaken by PISA results.