Thou should in fact basically copy his work, and then publish it in The Lancet, and then not cite him, or Heiner Rindermann, or David Becker, or Gerhard Meisenberg — in fact, best not to cite any wrong-thinker at all.

This seems to be what happened actually (initial tweet).

Human capital is recognised as the level of education and health in a population and is considered an important determinant of economic growth. The World Bank has called for measurement and annual reporting of human capital to track and motivate investments in health and education and enhance productivity. We aim to provide a new comprehensive measure of human capital across countries globally.

Countries vary widely in the rate of human capital formation. Monitoring the production of human capital can facilitate a mechanism to hold governments and donors accountable for investments in health and education.

We did a systematic analysis of available data for 195 countries from 1990 to 2016 to measure educational attainment, by sex and 5-year age groups (from 5 to 64 years) for the in-school and working-age population, and learning, as measured by performance on standardised tests of mathematics, reading, and science by 5-year age groups (from 5 to 19 years) for school-aged children. We constructed a measure of functional health status using the prevalence, by 5-year age groups, of seven health conditions for which evidence suggests a link to economic productivity using estimates from the Global Burden of Diseases, Injuries, and Risk Factors Study (GBD) 2016.16We also used mortality rates specific to location, age, sex, and year from GBD 2016.17
…
Our testing database contains a comprehensive record of learning scores for school-aged children aged 5–19 years. Four major programmes provide extensive data: the Programme for International Student Assessment [PISA], which began in 2000 and now tests students in 73 countries on a 3-year cycle;20the Progress in International Reading Literacy Study (PIRLS), which covered 50 countries in the 2016 iteration;21the Trends in International Mathematics and Science Study (TIMSS), of which the latest round in 2015 covered 57 countries;22 and several tests from the International Association for the Evaluation of Educational Achievement.23, 24,25 In addition to these programmes, we also used regional testing programmes, including the Southern and Eastern Africa Consortium for Monitoring Educational Quality [SACMEQ], 26 the Latin American Laboratory for Assessment of the Quality of Education, 27 and the Programme d’Analyse des Systèmes Educatifs de la Confem; 28 national standardised testing programmes, such as the US National Assessment of Education Progress, 29 and the India National Achievement Survey; 30 and representative studies measuring intelligence quotient (IQ) in school-aged children that largely included the Wechsler Intelligence Scale for Children, 31 the Raven’s Standard Progressive Matrices, 32 and the Peabody Picture Vocabulary test. 33 This database provides the most extensive geographical distribution and compilation of long-term temporal trends to date. Unlike several other studies, 34, 35, 36, 37, 38 which used similar data, we kept scores in different school subjects (ie, mathematics, reading, and science) separate. We also maintained data on the year the tests were done to understand trends through time and included demographic information such as grade level (for implied age) and sex.

On the positive side, they did produce a map that looks like this, which we might call the TOTALLY NOT WORLD NATIONAL IQs map. 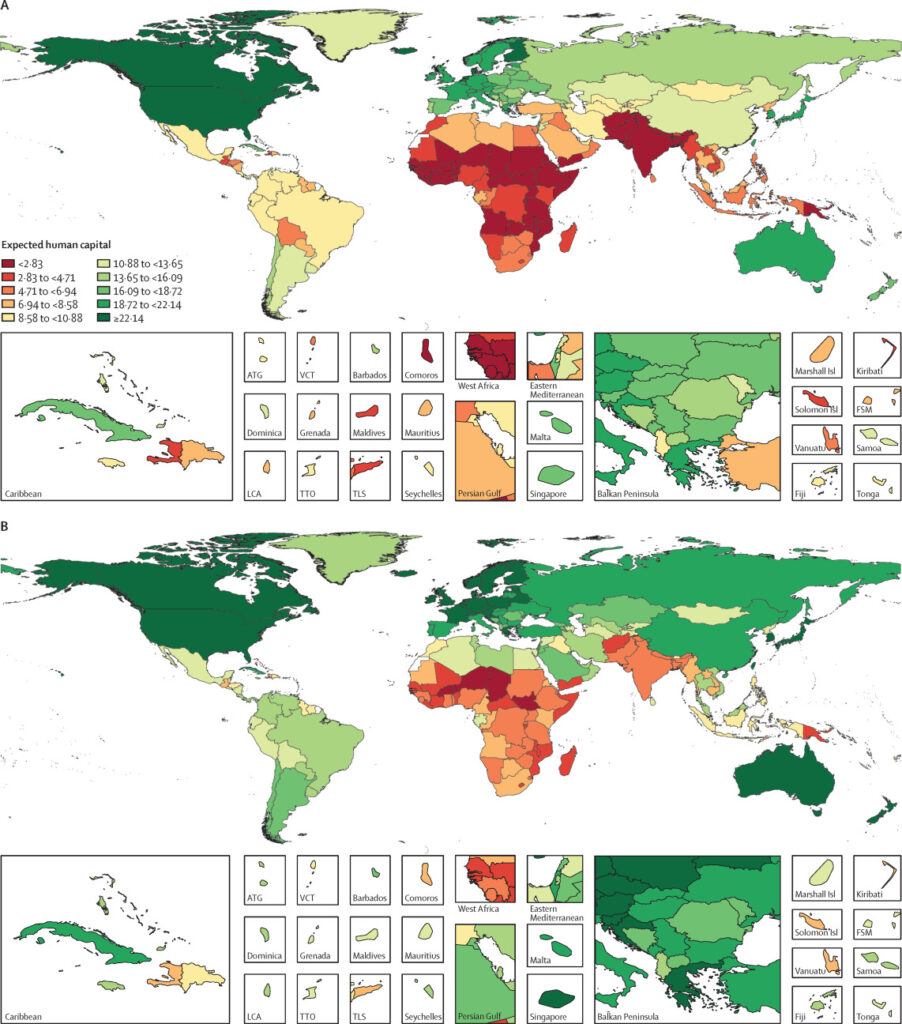 Bonus! A little while back, another team of unrelated people also produced a replication of national IQs, of course, also without citing any wrong-thinker. 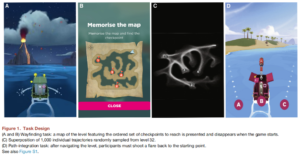 Human spatial ability is modulated by a number of factors, including age [ 1, 2, 3] and gender [ 4, 5]. Although a few studies showed that culture influences cognitive strategies [ 6, 7, 8, 9, 10, 11, 12, 13], the interaction between these factors has never been globally assessed as this requires testing millions of people of all ages across many different countries in the world. Since countries vary in their geographical and cultural properties, we predicted that these variations give rise to an organized spatial distribution of cognition at a planetary-wide scale. To test this hypothesis, we developed a mobile-app-based cognitive task, measuring non-verbal spatial navigation ability in more than 2.5 million people and sampling populations in every nation state. We focused on spatial navigation due to its universal requirement across cultures. Using a clustering approach, we find that navigation ability is clustered into five distinct, yet geographically related, groups of countries. Specifically, the economic wealth of a nation was predictive of the average navigation ability of its inhabitants, and gender inequality was predictive of the size of performance difference between males and females. Thus, cognitive abilities, at least for spatial navigation, are clustered according to economic wealth and gender inequalities globally, which has significant implications for cross-cultural studies and multi-center clinical trials using cognitive testing.

Which produced this map: 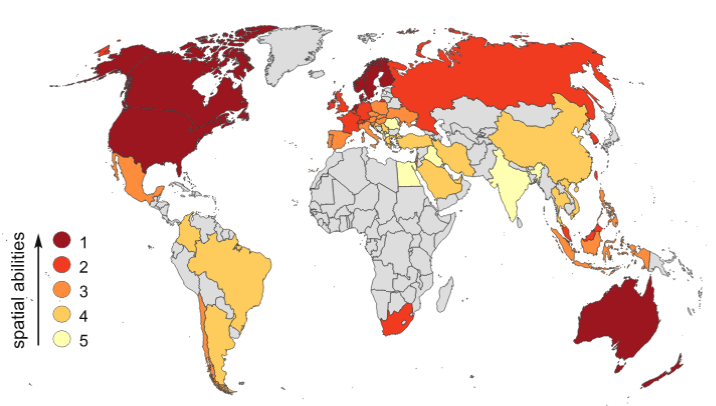 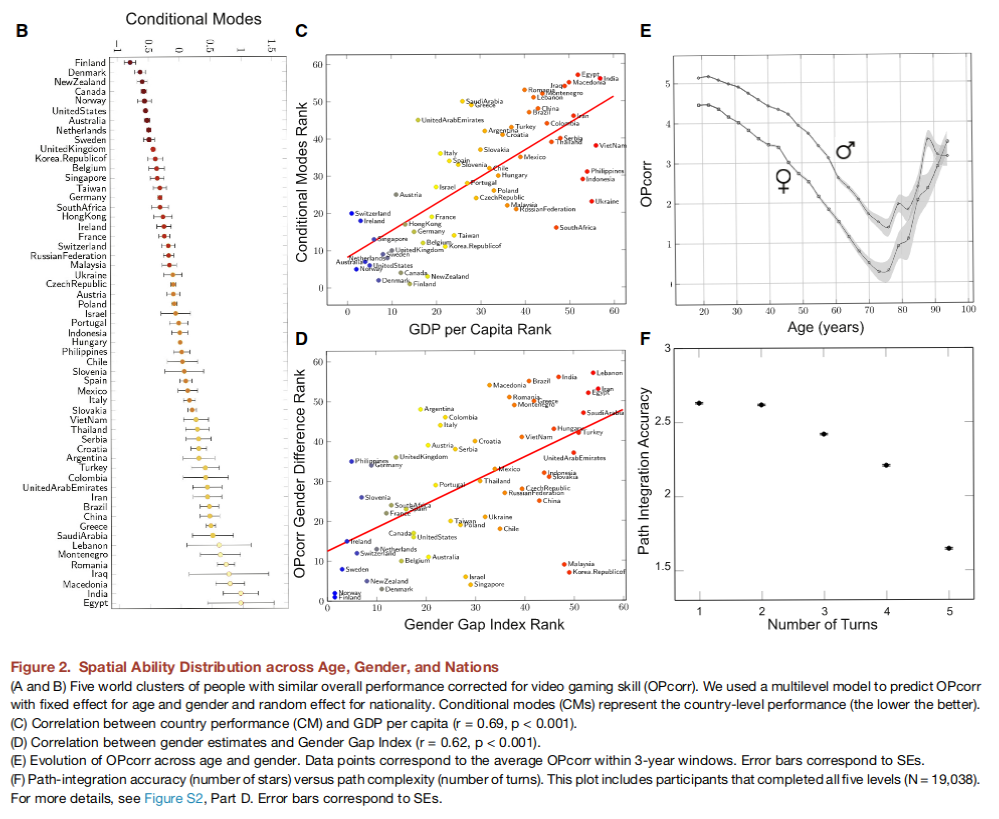 Bonus: World Bank gets into the game too

Heiner Rindermann is thanked for input, but no citations of his work or Lynn, Meisenberg etc.