Being on Twitter you quickly run into some people calling themselves scientists, but who seem to not be doing much science at all and instead spending their time on politics and self-promotion, not to mention book sales. Some years ago, some economists did some numbers on this and came up with the Kardashian Index (original paper, commentary here, here, online calculator). This is essentially a rescaled residual score of how many more followers on Twitter a scientist has compared to the expected number based on his citations as measured by Google Scholar. One can get the idea from a single plot from this post: 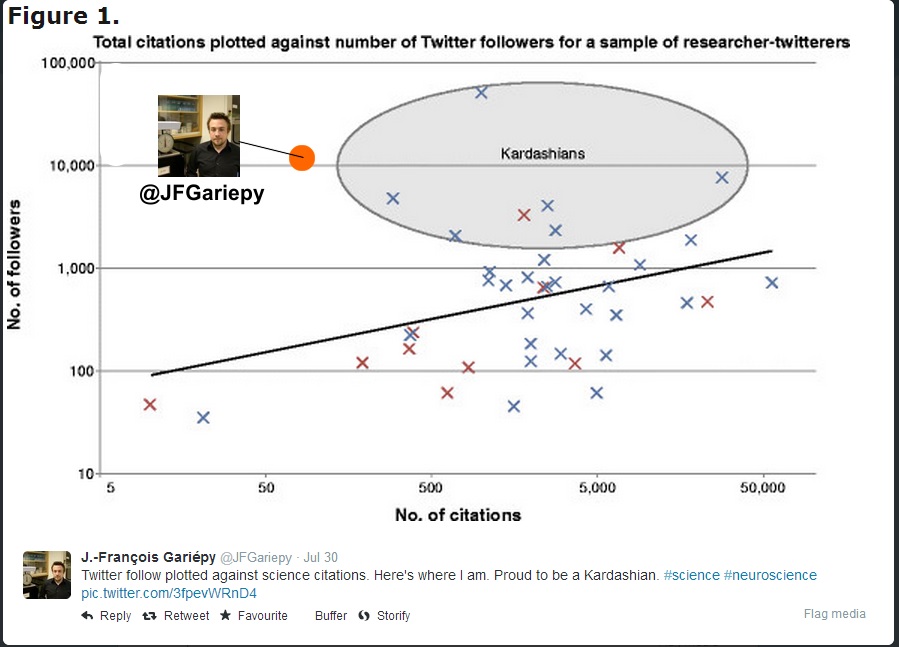 The person displayed being JFG, who used to be a neuroscientist postdoc, but who dropped out. He has ~12 research publications and over 10k Twitter followers (~35k as of writing), mainly because he has a popular alt-right talk show (The Public Space, ~23k subs).

The most extreme cases of Kardashians are people who put “Dr” or “PhD” prominently on their Twitter accounts, and who always talk about what science supposedly says, but when one searches for their publications, one finds not much at all. Adam Rutherford might serve as an example here, though they don’t have to be left-wing. 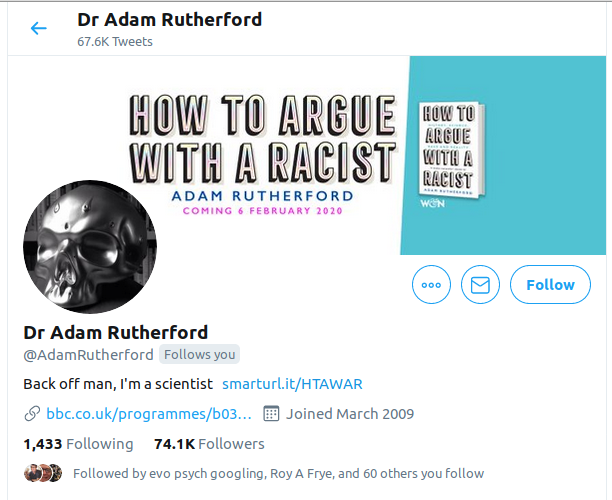 Like Action Amy of NYT, he follows me, presumably because I supply good content (read: examples of evil pseudoscience) for his upcoming books and paid lectures. Nonetheless, if we search for his body of scholarly works, we search mostly in vain. There is no Google Scholar page (search results), and there is only an autogenerated ResearchGate profile, which has mostly non-research work. Adam used to work for a journal as a journalist of sorts, so he wrote a bunch of articles in a journalistic role, which are being indexed by RG. Nonetheless, he does have a few published papers one can find with some work (e.g. 2001 middle author, 2004 first author, 2016 middle author). If someone wants more on Adam, a very unflattering description is given here.

It would be nice to have a larger study of scientists and their various social networking/media accounts. It would make for a very interesting network analysis. One could probably assign a politics score to each scientist based on their network position and behavior (retweets, citations etc.). There have been some attempts at this kind of thing before, but they weren’t entirely good. I am certain I found one once that displayed e.g. Richard Lynn, but I can’t seem to find it again. Contact me if you know some.