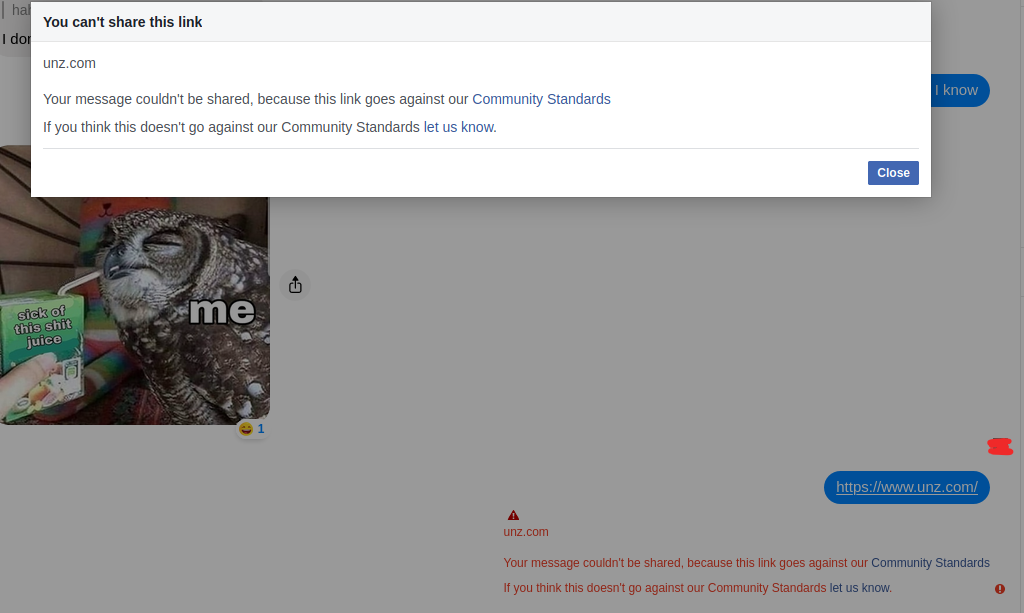 So, recently, we saw that Facebook added more sites to its block list. I don’t know if there’s a public listing of these, but the list must be getting very low indeed. It’s justified all the usual ways totalitarians justify their censorship: it begins with stuff ‘everybody can agree with’, such as spam sites and child porn. Then it expands from there to illegal drugs, illegal gambling sites, illegal weapons, and then go move into copyright violations (itself created by totalitarians for speech control, and used for this to this day). Finally, the holy grail for totalitarians, is always dissenting political speech. Naturally, it is never labeled as such by the censors, they always use euphemisms. So, when the Soviets banned anti-communism speech, they banned it not under that label, but under public safety claims. This time is no different. When the Woke high priests of Silicon Valley don’t like something, it will be labeled misinformation and so on. The result is always this kind of thing:

Speaking on CNN’s Reliable Sources, Wojcicki said that the Google-owned video streaming platform would be “removing information that is problematic”.

She told host Brian Stelter that this would include “anything that is medically unsubstantiated”.

“So people saying ‘take vitamin C; take turmeric, we’ll cure you’, those are the examples of things that would be a violation of our policy,” she said.

“Anything that would go against World Health Organisation recommendations would be a violation of our policy.”

Alright, so somehow the WHO has been appointed to Pope status of unquestionable views, despite a terrible track record on truth. Feature, not a bug, as they say.

It gets more fun though. What if a service had access to some large fraction of all private communication between humans? There is such a service, called Facebook, and it does scan your private messages for banned content. Try posting a link to Unz.com in private chat and see what happens:

For now, their secret messages function does NOT have this censorship added. There is nothing to prevent them from adding the censorship to the app so that it can pre-vet the text before encrypting. Of course, not that I very much trust Facebook end2end encryption. Following the Snowden revelations, we can practically assume they have various backdoors for NSA and who else is buying.

Now, for the time being, probably Facebook is using mainly simple filters as far as I can tell. Regex type stuff. However, we also know that they scan images for content. Try posting nudity on a wall if you don’t trust me. It will get flagged instantly from an AI image classifier, and you will get a violation. What’s the next step? It’s obvious: Facebook will train their AI to process natural language on the massive text corpus they have to. This will not only give them probably the world’s best language AI, but something more powerful: if taught to learn the facts discussed, it will build a global AI that knows the (hidden) networks between billions of humans, a appreciable proportion of the global population, their various secrets, including illegal or reputation damaging things one can use for blackmail. Naturally, considering the political status of Facebook, it might easily leak some of these things to the local BuzzFeed commissars. Even if you don’t use Facebook, you autistically swear to vetted (or ‘vetted’) encryption services (Signal, Whatsapp, Telegram, etc.), some of your friends and family will use Facebook, and they talk about you and your relations too, so you will be found and placed appropriately in the networks in the AI galaxy brain. To put it simply: Super AI + surveillance = technological totalitarianism. There is no escape from this dystopian hell because there is no possibility of secretly forming a resistance in a mass surveillance state as the one we have. The only question is who is in control, but we already know that.

You think I’m going too far? 2 days ago, Facebook announced this 100,000 USD challenge to build AI that identifies “hateful memes”, with the explicit goal of “In order for AI to become a more effective tool for detecting hate speech”. You know what is coming. 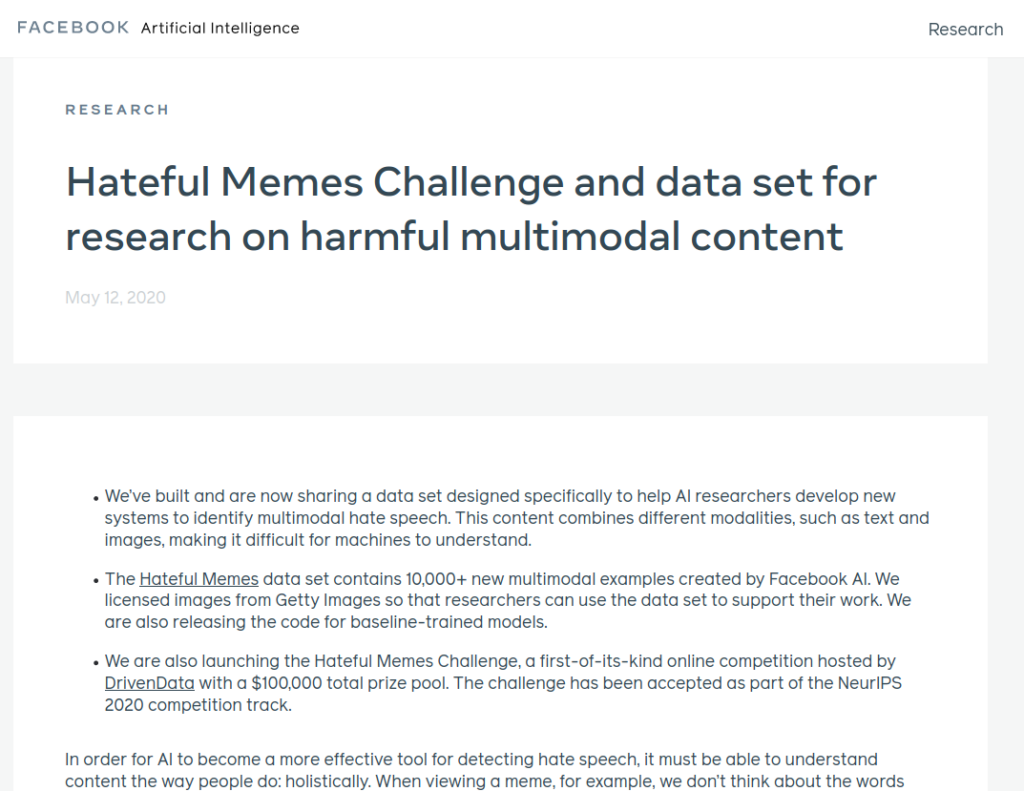 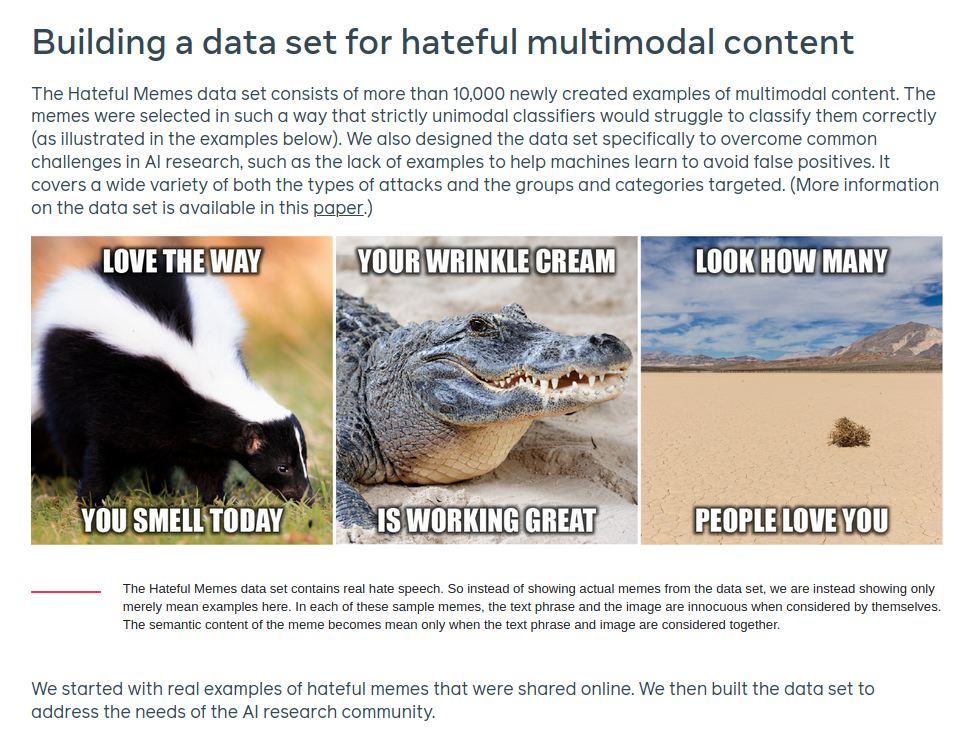 The end of anonymity in the crowd is near