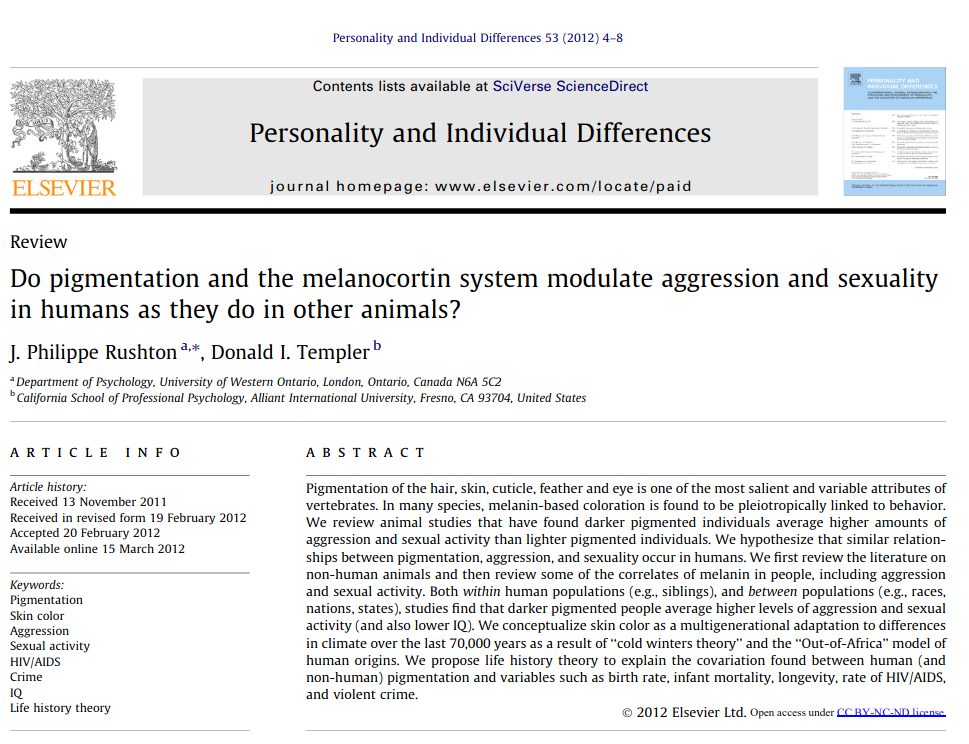 I hate censorship, so I repost the content they don’t want you to read here. I’m hoping to contribute to a Streisand effect.

Pigmentation of the hair, skin, cuticle, feather and eye is one of the most salient and variable attributes of vertebrates. In many species, melanin-based coloration is found to be pleiotropically linked to behavior. We review animal studies that have found darker pigmented individuals average higher amounts of aggression and sexual activity than lighter pigmented individuals. We hypothesize that similar relationships between pigmentation, aggression, and sexuality occur in humans. We first review the literature on non-human animals and then review some of the correlates of melanin in people, including aggression and sexual activity. Both within human populations (e.g., siblings), and between populations (e.g., races, nations, states), studies find that darker pigmented people average higher levels of aggression and sexual activity (and also lower IQ). We conceptualize skin color as a multigenerational adaptation to differences in climate over the last 70,000 years as a result of “cold winters theory” and the “Out-of-Africa” model of human origins. We propose life history theory to explain the covariation found between human (and non-human) pigmentation and variables such as birth rate, infant mortality, longevity, rate of HIV/AIDS, and violent crime.

So given the current revolution time, you can see why this paper is inconvenient. The retraction was covered by RetractionWatch, though as of writing, it’s still online and indeed, open access on the journal website.

This paper is actually just a small review of some animal and human studies that relate skin color (pigmentation) to outcomes without the PC gloss on it. Usually, such patterns are ascribed to racism based on perceived skin color (called colorism), to suggest otherwise would be very offensive. I actually don’t think the skin color genes in humans are linked to behavior once family structure is taken into account. Indeed, we tested this model for intelligence by comparing siblings and did not find that skin color relates to intelligence among siblings. The discrimination theory says that it should, but it doesn’t.

Little research has dealt with intragroup ancestry-related differences in intelligence in Black and White Americans. To help fill this gap, we examined the association between intelligence and both color and parent-reported ancestry using the NLSY97. We used a nationally-representative sample, a multidimensional measure of cognitive ability, and a sibling design. We found that African ancestry was negatively correlated with general mental ability scores among Whites (r = −0.038, N = 3603; corrected for attenuation, rc = −0.245). In contrast, the correlation between ability and parent-reported European ancestry was positive among Blacks (r = 0.137, N = 1788; rc = 0.344). Among Blacks, the correlation with darker skin color, an index of African ancestry, was negative (r = −0.112, N = 1455). These results remained with conspicuous controls. Among Blacks, both color and parent-reported European ancestry had independent effects on general cognitive ability (color: β = −0.104; ancestry: β = 0.118; N = 1445). These associations were more pronounced on g-loaded subtests, indicating a Jensen Effect for both color and ancestry (rs = 0.679 to 0.850). When we decomposed the color results for the African ancestry sample between and within families, we found an association between families, between singletons (β = −0.153; N = 814), and between full sibling pairs (β = −0.176; N = 225). However, we found no association between full siblings (β = 0.027; N = 225). Differential regression to the mean results indicated that the factors causing the mean group difference acted across the cognitive spectrum, with high-scoring African Americans no less affected than low-scoring ones. We tested for measurement invariance and found that strict factorial invariance was tenable. We then found that the weak version of Spearman’s hypothesis was tenable while the strong and contra versions were not. The results imply that the observed cognitive differences are primarily due to differences in g and that the Black-White mean difference is attributable to the same factors that cause differences within both groups. Further examination revealed comparable intraclass correlations and absolute differences for Black and White full siblings. This implied that the non-shared environmental variance components were similar in magnitude for both Blacks and Whites.

As we noted, there are other similar studies, and they overall find similar results:

More generally, it is not clear that colorism is actually a potent force, at least in the USA. Consider research based on sibling designs, which can distinguish between discriminatory and intergenerational effects. A number of studies in the economics literature have utilized sibling control designs in this fashion [81,82,83,84,85,86]. Unfortunately, they differ somewhat in design (e.g., raw vs. SES-controlled results for between-family regressions), and do not report standardized effect measures, so we were unable to quantitatively meta-analyze them. However, generally speaking, when family characteristics are controlled for, residual associations between racial appearance and social outcomes are small. In the words of one researcher who studied a large dataset from Brazil: “[T]he estimated coefficients are small in magnitude, implying that individual discrimination is not the primary determinant of interracial disparities. Instead, racial differences are largely explained by the family and community that one is born into” [81]. Mill and Stein [83] make statements to the same effect based on an analysis of a large dataset from the USA.

Because of this censorship, I conducted a new study of criminal behavior in the NLSY-97 dataset, and confirmed the usual, small associations with skin color. I didn’t look among siblings because the study wasn’t large enough to be informative. This is a work in progress, but here’s some initial results:

I am hoping to finish up this study for autumn issue of Mankind Quarterly.

Is miscegenation bad for your kids?

New video out on the Dunning Kruger effect, of lack thereof