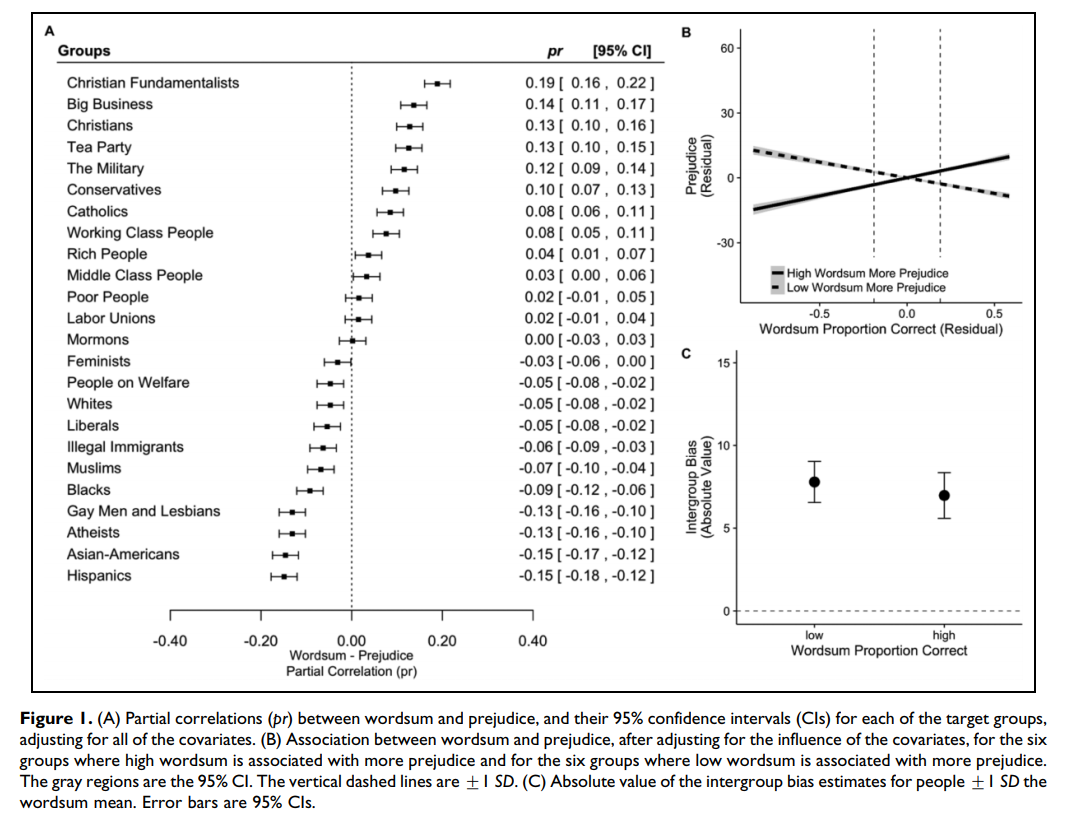 So the story goes like this: once upon a time, the European countries had a great war. Then they had another great war. After the second one, people in academia who disliked the politics of the losing side (i.e., the Nazis) decided that disliking certain groups was really bad, and should perhaps be considered pathological. So they made up a personality measure to prove this: Right-Wing Authoritarianism scale (which you can try). And yes, it does sometimes show links to mental illness, but not generally, and sometimes the other side shows the same patterns, causing a horseshoe theory pattern. OK, so the next plan was to then show that people high in RWA are bad people, so prove they are stupid, racist, generally prejudiced and so on. These findings have been fairly solid for decades, one can find reassurance in many meta-analyses: Personality and Prejudice: A Meta-Analysis and Theoretical Review is a random example. As a corollary of this, many wanted to show that prejudice itself was also linked to low intelligence. We get papers like Bright minds and dark attitudes: Lower cognitive ability predicts greater prejudice through right-wing ideology and low intergroup contact (2012), and Does Lower Cognitive Ability Predict Greater Prejudice? (2014) and The association of cognitive ability with right‐wing ideological attitudes and prejudice: A meta‐analytic review (2015).

Their measure aren’t actually a measure of prejudice in the regular meaning:

The two elements of prejudice are thus 1) negative affect for someone(s) or something(s), and 2) not reasonable, unjustified, or otherwise irrational. But their measures in these studies don’t actually measure such things. They typically use what is called the feeling thermometer, here’s the ANES version (a widely used, public US database): 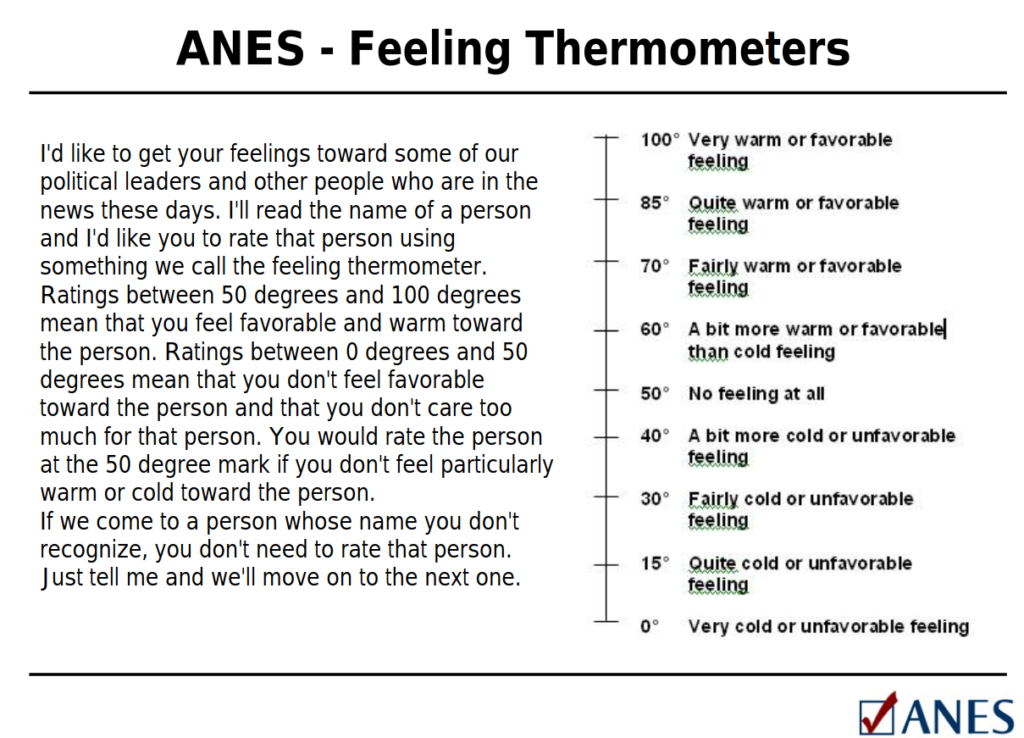 So maybe you are thinking, wait a minute, how does this measure whether the stance is justified or not? Well, it doesn’t! Researchers just assume that. They aren’t really measuring anything about justification, they are only measuring affect, and then calling it prejudice. Maybe you hate criminals because they steal your stuff, slice your tires, and rob your kids. So you rate them very low on the feeling thermometer. Now some sociologist will come along and conclude you are prejudiced against criminals.

The next part of the story is that inside of asking about all kinds of groups in society, they mainly ask about those that they themselves like, and want to protect. So they ask about women, blacks, criminals, the mentally ill and so on. These groups conveniently lean left-wing, so naturally right-wing people rate them lower on their feeling thermometers than left-wing people. Tadaa, right-wing people are more prejudiced, science proves it.

If we ignore the fake-prejudice measure part, and simply expand the groups covered the results change completely: 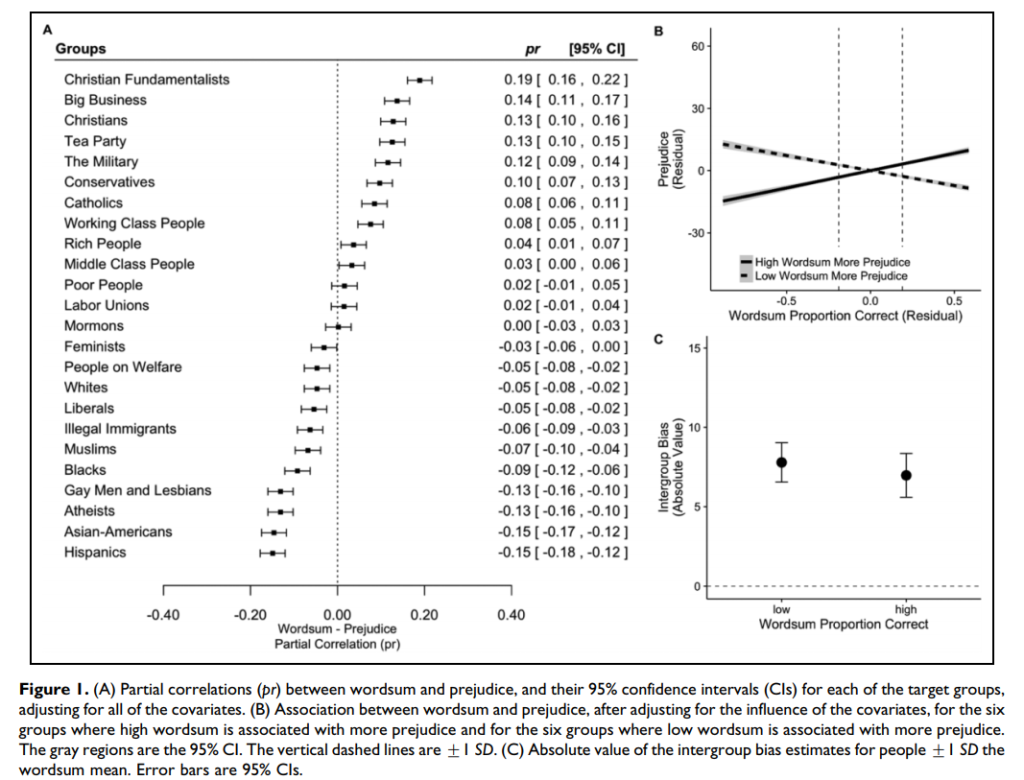 In left figure, the X axis shows the correlation to the intelligence proxy (Wordsum vocabulary test) and each rated group. They are ranked in order so that the groups intellectuals, high society, the media etc. dislike are at the top, and the ones conservatives, traditionalists, and hillbillies dislike are at the bottom (the main exception I see is that whites should be on the top part, but they are not, maybe because they adjusted for some covariates “In all of our primary analyses, we adjusted for income, education, self-reported age, gender, and three contrast codes for race/ethnicity (see Supplemental Materials for more information)”). If we actually average across these, there isn’t any difference in feelings by intelligence (bottom right figure), it’s just a matter of who you dislike.

Here’s some more information about the same targets and how it relates to the intelligence-feelings relationship: 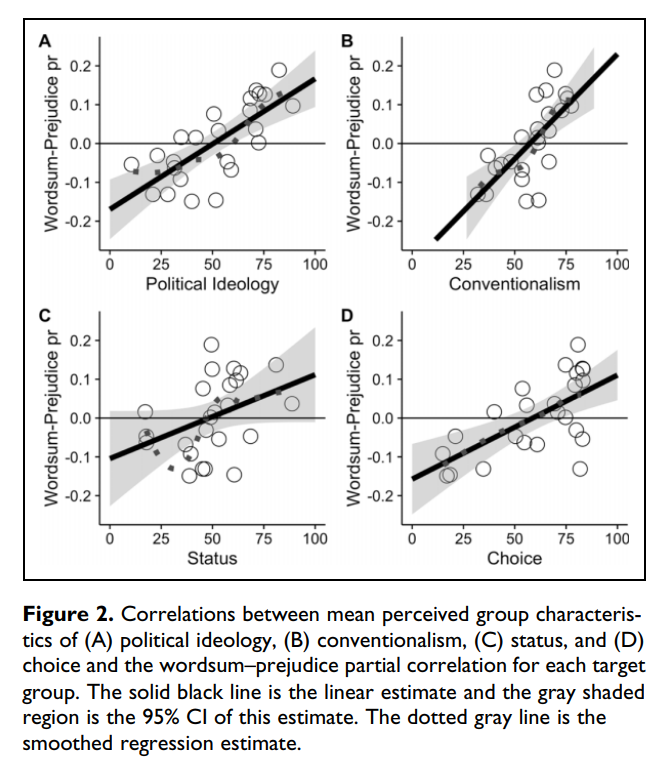 So things are a bit more complicated than just the pattern I mentioned above, but it’s roughly like that. The above plots are from the first paper in the series below, which I strongly recommend if you want more stuff on this interesting phenomenon:

Stereotype accuracy: summary of some studies