Der er is a famous meta-analysis showing that motivation affects IQ scores to a substantial degree:

Intelligence tests are widely assumed to measure maximal intellectual performance, and predictive associations between intelligence quotient (IQ) scores and later-life outcomes are typically interpreted as unbiased estimates of the effect of intellectual ability on academic, professional, and social life outcomes. The current investigation critically examines these assumptions and finds evidence against both. First, we examined whether motivation is less than maximal on intelligence tests administered in the context of low-stakes research situations. Specifically, we completed a meta-analysis of random-assignment experiments testing the effects of material incentives on intelligence-test performance on a collective 2,008 participants. Incentives increased IQ scores by an average of 0.64 SD, with larger effects for individuals with lower baseline IQ scores. Second, we tested whether individual differences in motivation during IQ testing can spuriously inflate the predictive validity of intelligence for life outcomes. Trained observers rated test motivation among 251 adolescent boys completing intelligence tests using a 15-min “thin-slice” video sample. IQ score predicted life outcomes, including academic performance in adolescence and criminal convictions, employment, and years of education in early adulthood. After adjusting for the influence of test motivation, however, the predictive validity of intelligence for life outcomes was significantly diminished, particularly for nonacademic outcomes. Collectively, our findings suggest that, under low-stakes research conditions, some individuals try harder than others, and, in this context, test motivation can act as a third-variable confound that inflates estimates of the predictive validity of intelligence for life outcomes. 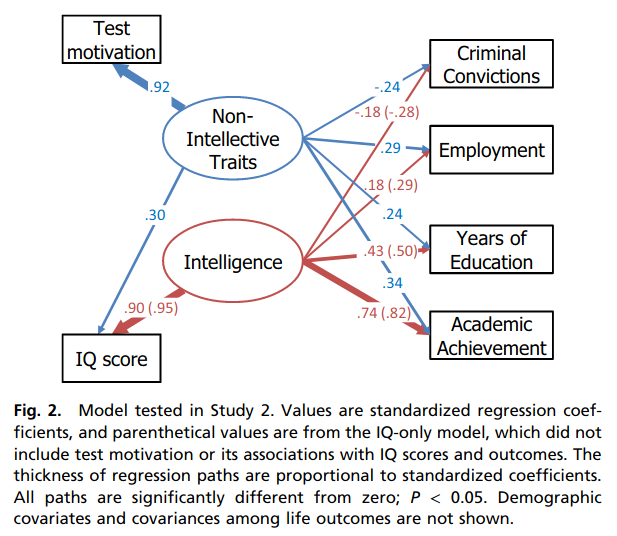 I.e., IQ scores are caused both by trait variance (intelligence, g) and by motivation. That is to say, there is some trait impurity in the measures because it in part measures the wrong trait, motivation. Insofar as people differ on this trait, and insofar as differences on this trait relate to variables of interest, it will cause biases when using IQ scores to estimate the intelligence to variables of interest.

There are some serious problems with this meta-analysis, which you can read about here in detail, but two points: 1) Stephen Breuning contributed studies to it and he’s a known fraud and his effect sizes are about 2 d (!!!) and thus very likely fraudulent. Strangely, this has been known for a long time (e.g. 1988) but his studies were still included and there wasn’t a note about this issue. 2) even without his likely fraudulent studies, we get this pattern: 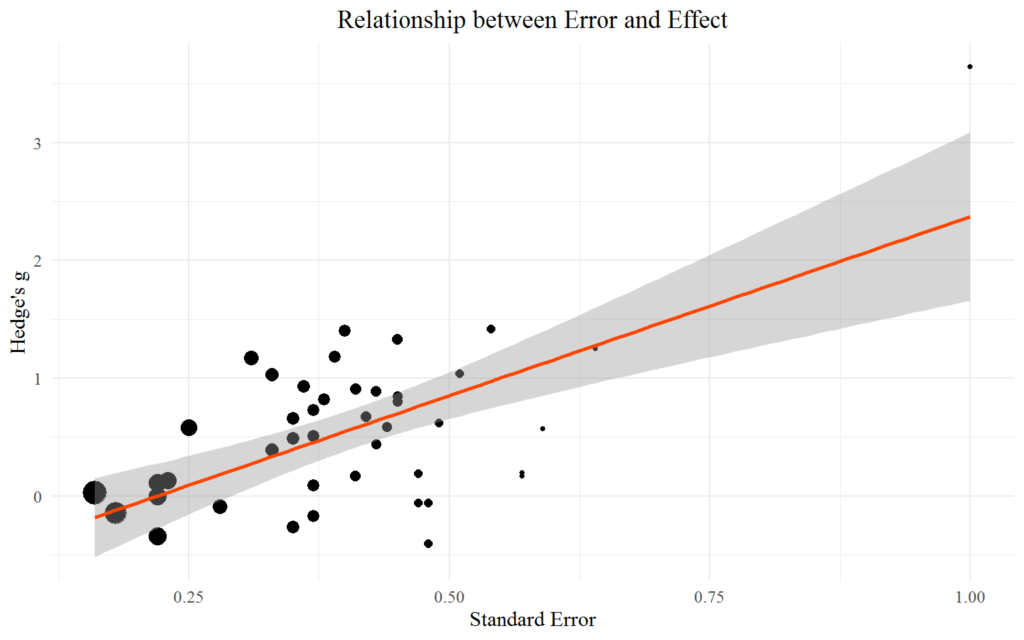 If you have learned anything from the last years of replication failures, then it is that this pattern is not what you want.

Problems aside with that work, there is some newer work too:

So, limited sample size, but we need more of this. I was telling the author this when he presented the work at ISIR 2017. Hopefully, he can find some collaborators to run a larger replication. There is a replication of sorts here, also small and with some dubious p values…

Intelligence tests are assumed to require maximal effort on the part of the examinee. However, the degree to which undergraduate first-year psychology volunteers, a commonly used source of participants in low-stakes research, may be motivated to complete a battery of intelligence tests has not yet been tested. Furthermore, the assumption implies that the association between test-taking motivation and intelligence test performance is linear – an assumption untested, to date. Consequently, we administered a battery of five intelligence subtests to a sample of 219 undergraduate volunteers within the first 30 min of a low-stakes research setting. We also administered a reading comprehension test near the end of the testing session (55 min). Self-reported test-taking motivation was measured on three occasions: at the beginning (as a trait), immediately after the battery of five intelligence tests (state 1), and immediately after the reading comprehension test (state 2). Six percent of the sample was considered potentially insufficiently motivated to complete the intelligence testing, and 13% insufficiently motivated to complete the later administered reading comprehension test. Furthermore, test-taking motivation correlated positively with general intelligence test performance (r ≈ 0.20). However, the effect was non-linear such that the positive association resided entirely between the low to moderate levels of test-taking motivation. While simultaneously acknowledging the exploratory nature of this investigation, it was concluded that a moderate level of test-taking effort may be all that is necessary to produce intelligence test scores that are valid. However, in low-stakes research settings, cognitive ability testing that exceeds 25 to 30 min may be inadvisable, as test-taking motivational levels decrease to a degree that may be concerning for a non-negligible portion of the sample.

So a meta-analysis replication, sort of, because this one is not about controlled studies.