Studies using data from classic online dating websites and speed-dating both found that men exhibited less of a preference for women whose intelligence or ambition exceeded their own. A study by four UK universities found that a woman’s likelihood of marriage decreased by 40 percent for each 16-point increase in her IQ. In contrast, men experienced a 35 percent increase in the likelihood of marriage for each 16-point IQ increase. Finally, researchers reported that men displayed lower levels of implicit self-esteem when confronted with their female partner’s success. The opposite holds true for women when their male partner succeeded.

The British study, the link is to… ABC news which says:

A high IQ is a hindrance for women wanting to get married while it is an asset for men, according to a study by four British universities.

The study found the likelihood of marriage increased by 35 per cent for boys for each 16 point increase in IQ.

But for girls, there is a 40 per cent drop for each 16-point rise, according to the survey by the universities of Aberdeen, Bristol, Edinburgh and Glasgow.

The study is based on the IQs of 900 men and women between their 10th and 40th birthdays.

“Women in their late 30s, who have gone for careers after the first flush of university and who are among the brightest of their generation, are finding that men are just not interesting enough,” psychologist and professor at Nottingham University Paul Brown said.

“A chap with a high IQ is going to get a demanding job that is going to take up a lot of his energy and time,” she said.

“In many ways he wants a woman who is an old-fashioned wife and looks after the home, a copy of his mum in a way.”

The study has been published in The Sunday Times newspaper.

The study has been published in what? No links. So where is the mysterious study. Some internet sleuthing later, I get this discussion, where someone found the actual study:

The study examined the influence of IQ at age 11 years on marital status by mid-adulthood. The combined databases of the Scottish Mental Survey 1932 and the Midspan studies provided data from 883 subjects. With regard to IQ at age 11, there was an interaction between sex and marital status by mid-adulthood (p = 0.0001). Women who had ever-married achieved mean lower childhood IQ scores than women who had never-married (p < 0.001). Conversely, there was a trend for men who had ever-married to achieve higher childhood IQ scores than men who had never-married (p = 0.07). In men, the odds ratio of ever marrying was 1.35 (95% CI 0.98–1.86; p = 0.07) for each standard deviation increase in childhood IQ. Among women, the odds ratio of ever marrying by mid-life was 0.42 (95% CI 0.27–0.64; p = 0.0001) for each standard deviation increase in childhood IQ. Mid-life social class had a similar association with marriage, with women in more professional jobs and men in more manual jobs being less likely to have ever-married by mid-life. Adjustment for the effects of mid-life social class and height on the association between childhood IQ and later marriage, and vice versa, attenuated the effects somewhat, but suggested that IQ, height and social class acted partly independently.

Not one but two p = .07’s, in the abstract no less. This is some odd way to present regression models: 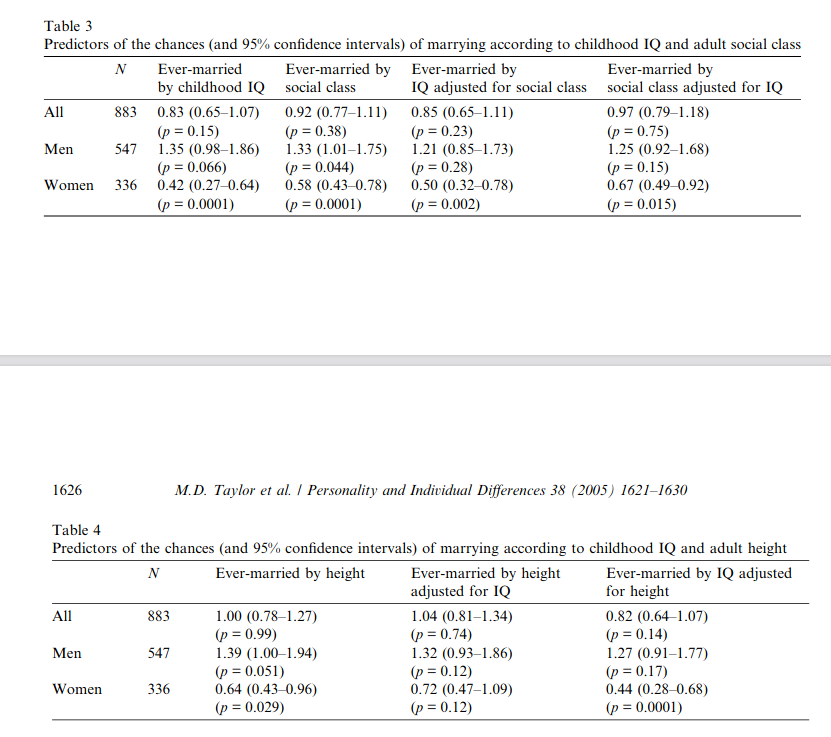 The study is full of dodgy p values. I don’t know why Ian Deary agreed to this mess. The interaction is real enough, they apparently did fit a proper full model to the dataset (interaction p = .0001).

Presentation for my talk for LCI15