You may recall a few months back that Canada’s highest court declared a math test for school teachers to be … unconstitutional:

As a result of a recent decision of the Ontario Superior Court of Justice – Divisional Court, the Mathematics Proficiency Test (MPT) is no longer a certification requirement. The full text of the court’s decision can be viewed here.

This means that evidence of successful completion of the MPT is no longer required for:

We are in the process of notifying affected members and applicants of this change, in addition to updating our communication materials and records, including applications, certificates and the public register (Find A Teacher). This process will take time to complete and we appreciate your patience.

The Ontario government is seeking leave to appeal the Divisional Court’s decision. The College will follow the proceedings and comply with any future court orders as well.

You got it right: it is now illegal to use a math test to make sure that math teachers know the material they would be teaching. Amazing stuff. The court itself wrote:

[1]           The Applicants seek judicial review of Ontario’s Mathematics Proficiency Test (“MPT”), a standardized math test that all teacher candidates must pass to become certified as teachers in Ontario. The Applicants seek a declaration that the MPT and the provisions requiring it violate s. 15 of the Canadian Charter of Rights and Freedoms (the “Charter”).

[2]           The question on this application is whether the MPT has a disproportionate adverse impact on entry to the teaching profession for racialized teacher candidates and if so, whether it can be justified under s. 1 of the Charter.

[3]           The evidence points to significant disparities in success rates of standardized testing based on race, including statistical evidence of racial disparities with respect to the MPT specifically. The deleterious effect on diversity is somewhat ameliorated by subsequent attempts available to retake the MPT.

Civil rights is legal warfare by the promoters of the incompetent and unloved against functional society.

Back to the data. Given that the math test is bad, we know it must be revealing some uncomfortable facts. So John Fuerst checked. The numbers are given by the court too:

Pass rates are a nonlinear transformation of an underlying normal distribution. One can reverse this transformation using the ‘inverse normal’ function if we assume equal standard deviations of the groups in question. This assumption probably isn’t exactly right, in fact, it should be false given differential selection into the teaching education, but it is close to correct. The numerical results are these:

The implied African-European gap is 12 IQ, and the Hispanic-European one is 8 IQ. These are pretty normal size gaps. Here it should be recalled that IQ gaps within occupations are somewhat smaller due to selection into the occupations. Charles Murray’s recent book Facing Reality: Two Truths about Race in America provides these gaps for a number of other occupations: 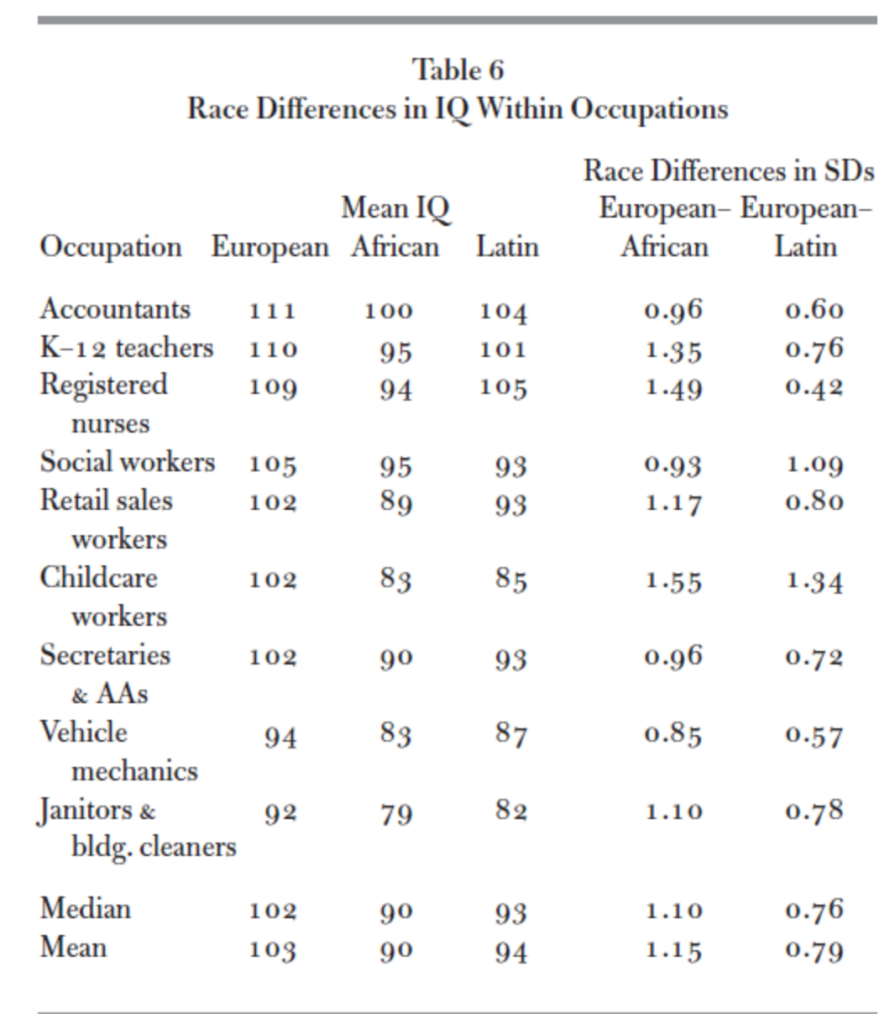 Note that the SD gaps in the right columns are given in within occupation units. We see that for K-12 teachers, the gap is 110 vs. 95, which is 15 IQ, and 110 vs. 101, so 9 IQ. This compares to the values of 12 and 8 in Canada for math teachers. Fairly close. It may be that Canadian Africans are a bit smarter on average, which might make their overall gap somewhat smaller than the one in the USA. Richard Lynn’s book compilation (Race differences in intelligence, 2nd edition) does not support this, as his 3 studies found a median of IQ 84 in relation to the Canadian of 100 (chapter 5, section 6). Maybe it is because these are specifically math teachers, and those are a bit more selected, hence show smaller race gaps. Whatever the reason, it is obvious that these teacher certification tests prevent some incompetent people from becoming teachers. Now that they can be removed, it can rest assured that more Canadian Africans will now have less competent teachers. I am sure this will help their school performance.

Intelligence and religiousness in OKCupid dataset