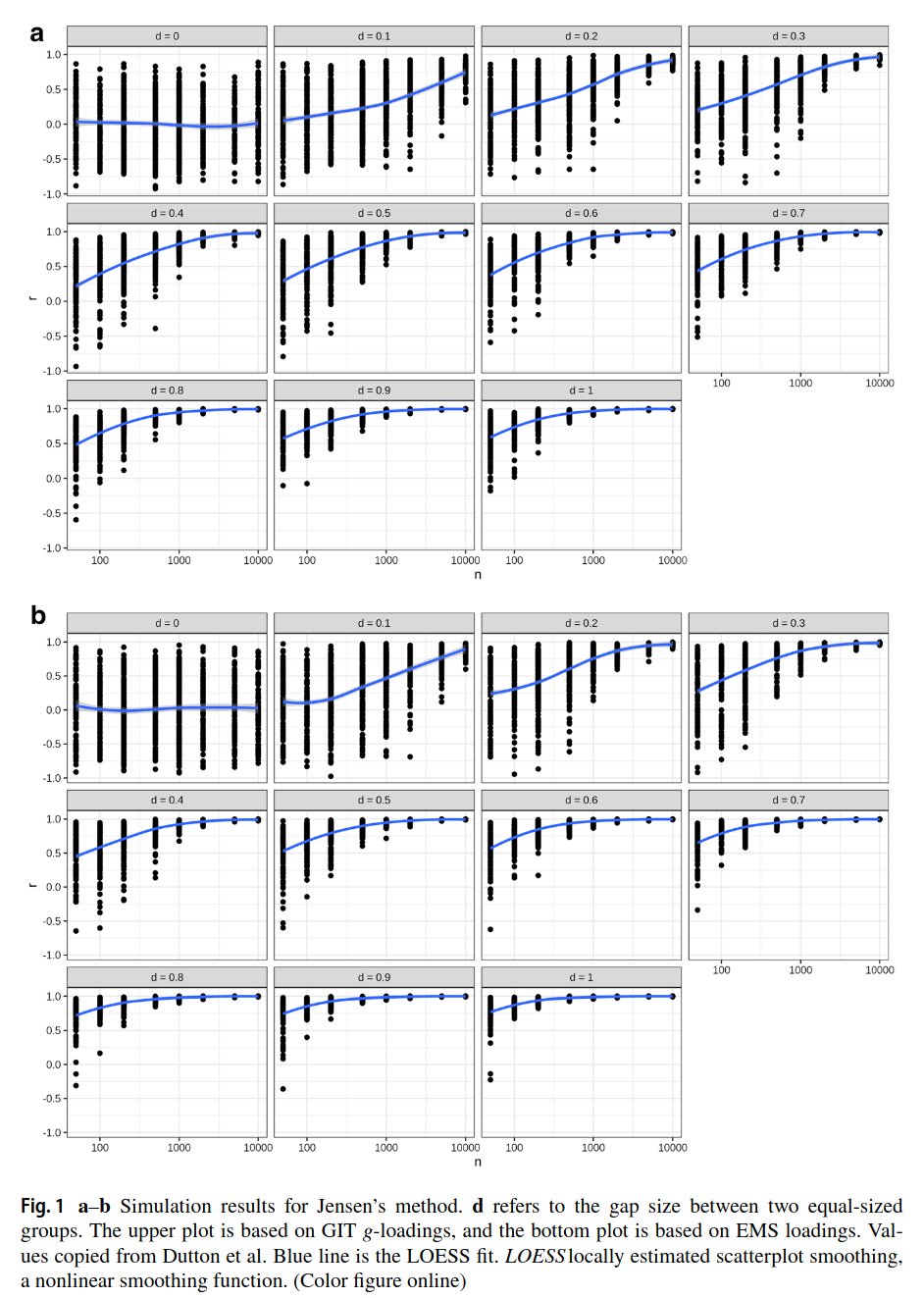 A recent study by Dutton et al. (J Relig Health 59:1567–1579. https://doi.org/10.1007/s10943-019-00926-3, 2020) found that the religiousness-IQ nexus is not on g when comparing different groups with various degrees of religiosity and the non-religious. It suggested, accordingly, that the nexus related to the relationship between specialized analytic abilities on the IQ test and autism traits, with the latter predicting atheism. The study was limited by the fact that it was on group-level data, it used only one measure of religiosity that measure may have been confounded by the social element to church membership and it involved relatively few items via which a Jensen effect could be calculated. Here, we test whether the religiousness-IQ nexus is on g with individual-level data using archival data from the Vietnam Experience Study, in which 4462 US veterans were subjected to detailed psychological tests. We used multiple measures of religiosity—which we factor-analysed to a religion-factor—and a large number of items. We found, contrary to the findings of Dutton et al. (2020), that the IQ differences with regard to whether or not subjects believed in God are indeed a Jensen effect. We also uncovered a number of anomalies, which we explore.

It’s a methods paper that essentially replies to Dutton’s own prior paper (with colleagues). We use much better methods and find the opposite, boring conclusion.

We show that prior negative results are due to toward-0 bias from Jensen’s method when used with small gaps and small sample sizes (unreliability of the gap vectors).

We use data from the awesome Vietnam Experience Study (VES) which has 19 cognitive tests, and all the MMPI-2 items, many of which ask about religious matters. 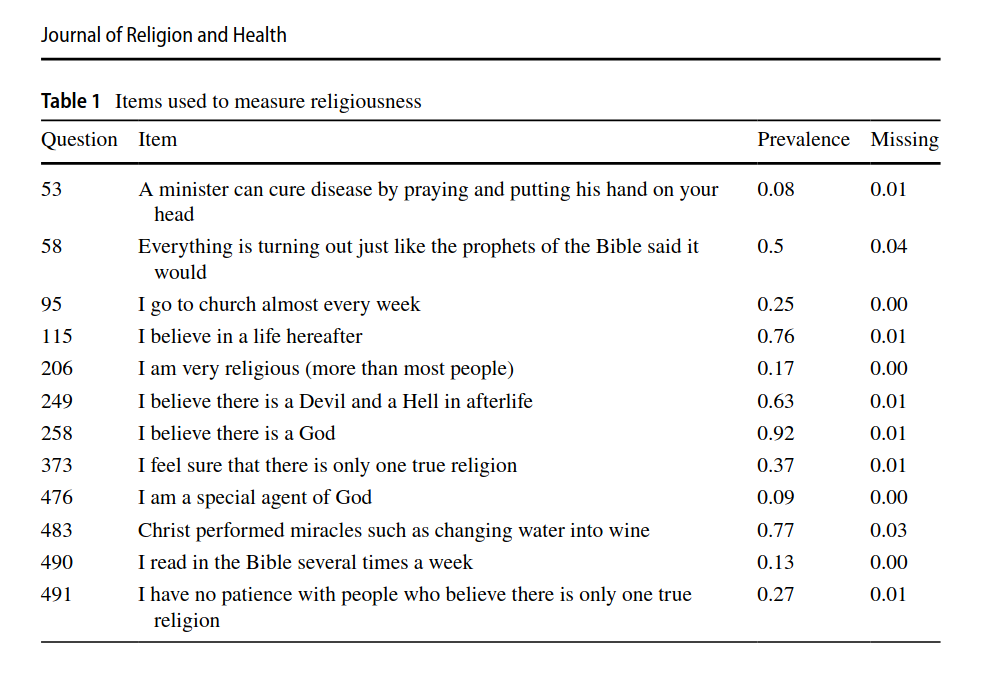 Factor analyzing the religious items yields a kind of semi-continuous religiousness latent variable. This is related to intelligence at -0.20 ish. 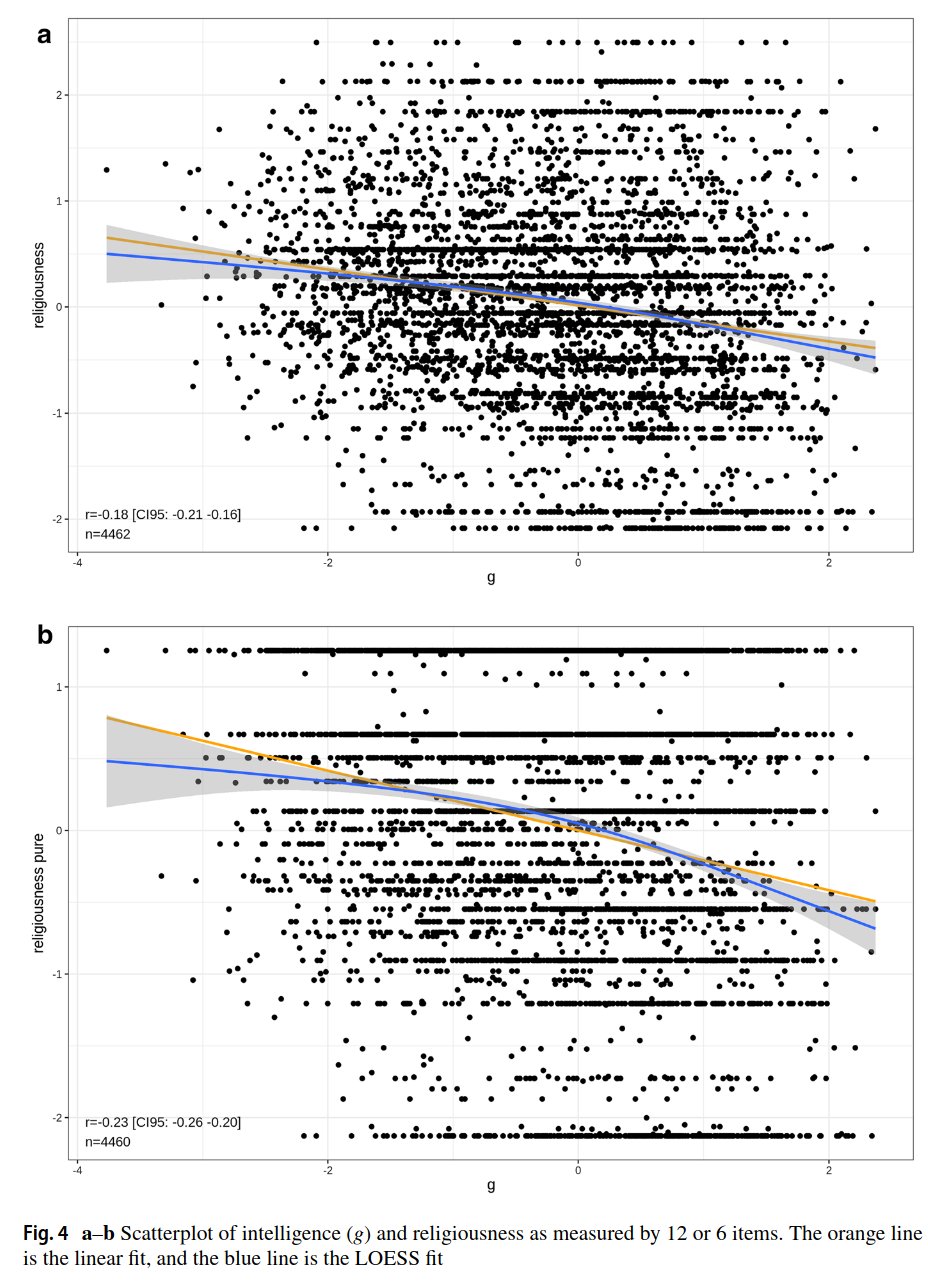 Using our battery of tests, we find the usual strong Jensen pattern. 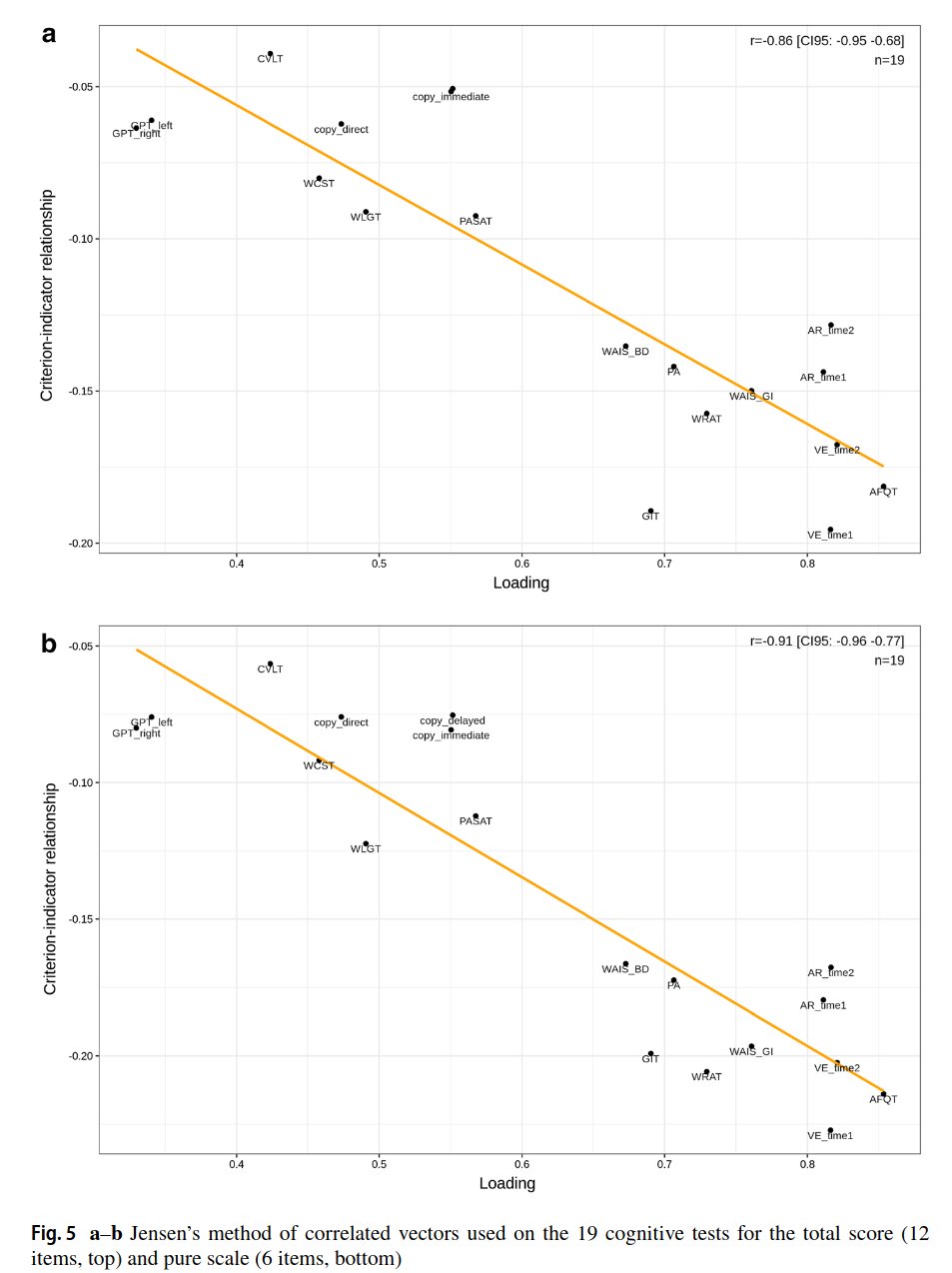 Regression analysis does not show any obvious confounding with age, race, or even education and income. Effect of intelligence seems pretty direct. 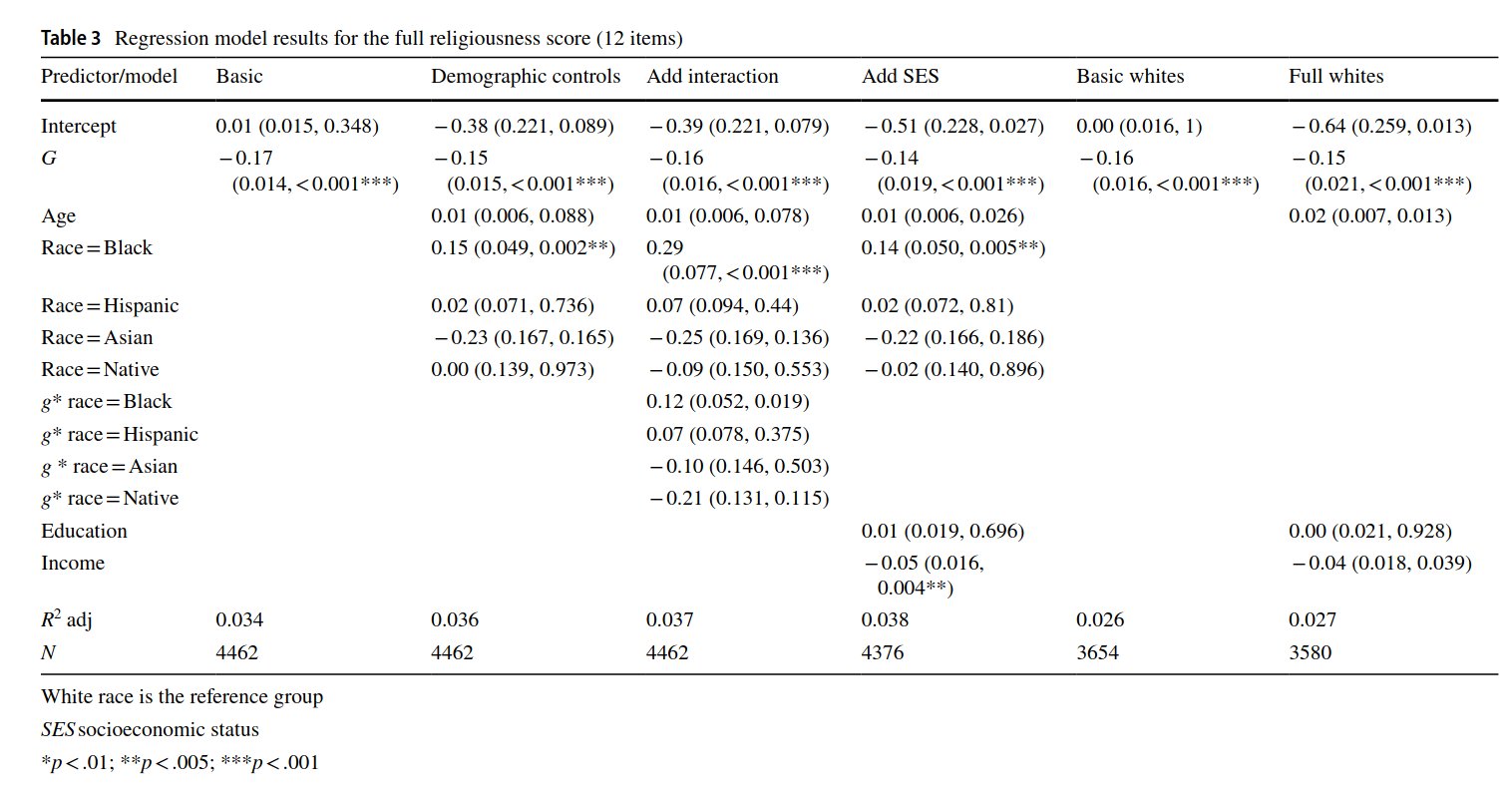 We go further. We have access to some 200 items too, and these also show the Jensen pattern. Note the outliers! The one item that is way out of place is WAIS Information 18, which in fact asks about contents of the Bible. Religious people get it right a lot more often. 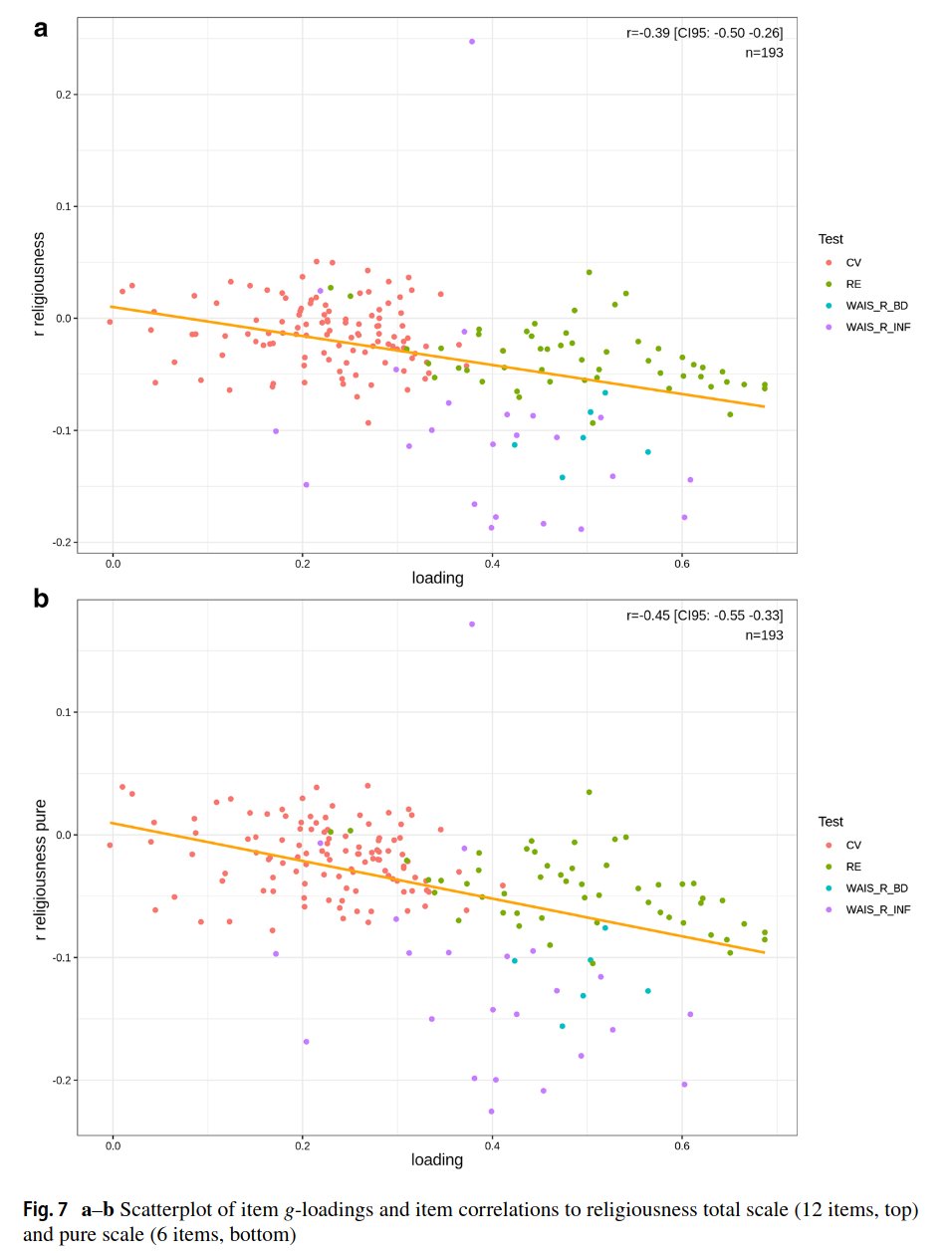 Finally, we find that the various indicators of religiousness show quite different associations to intelligence. It is mainly the belief-related indicators that relate, not behaviors. This is also true when controls are added. 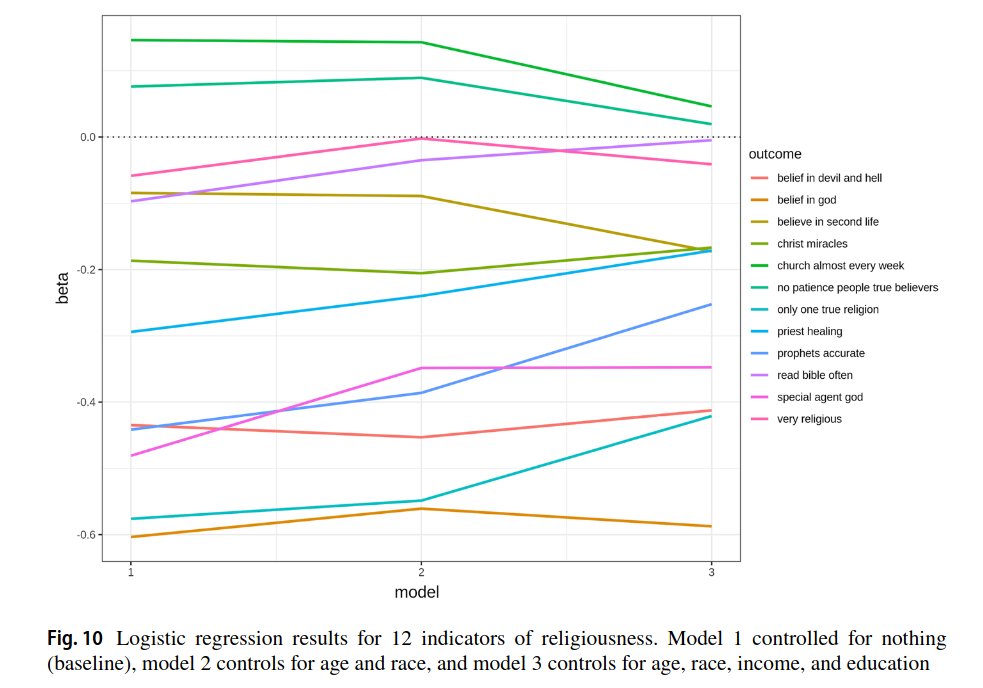 Fluoride, good for your teeth, not bad for your brain

People do not overestimate their romantic partner’s IQ by 30