People commonly ascribe large effects to having this or that teacher, or this or that classmate. They usually cite some anecdotes from their personal lives for this, but large sample size, systematic data are strongly negative on the idea. This means that to the extent one can measure things, teachers are largely interchangeable in terms of these traits. If the pattern holds up generally, it would suggest that trying to move talent into teaching profession is a bad idea; we should instead actively discourage talented people from going into teaching and let it be done by mediocre people. The talented people should instead go into fields that produce meaningful returns to talent, such as technology-heavy fields.

There is little research to date on the academic implications of teaching twins in the same or different classroom. Consequently, it is not clear whether twin classroom separation is associated with positive or negative educational outcomes. As a result, parents and teachers have insufficient evidence to make a well-informed decision when twins start school. This study addresses two research questions: Are there average positive or negative effects of classroom separation? Are twins taught in different classes more different from each other than twins taught in the same class? Twin pairs from two large representative samples from Quebec (Canada) and the United Kingdom were evaluated across a large age range (7 to 16 years) on academic achievement, several cognitive abilities and motivational measures. Our results show almost no sizable positive or negative average effect of classroom separation on twins’ achievement, cognitive ability and motivation. Twin pairs at age 12 (Quebec, Canada) and at age 16 (United Kingdom) were slightly more similar on achievement if placed in the same classroom, with slightly greater similarity among monozygotic twins than dizygotic twins. However, the few effects found were weak, and it remains unclear whether they result from classroom separation or other factors. These results suggest that in terms of educational outcomes, policymakers should not impose rigid guidelines to separate twin pairs during their education. The choice of whether to educate twin pairs together or separately should be up to parents, twins and teachers, in response to twins’ individual needs. 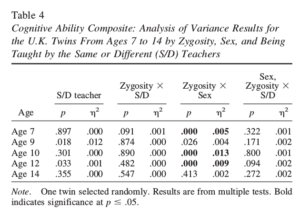 Note: researchers also plotted a few subsets that did produce some effects, but since these are picked because they are anomalous, I won’t repost them here. As can be seen, in the largest case, the effect size was fairly small at 3.6% variance for UK sample at age 16 for math (equivalent to r = 0.2).

Little is known about why people differ in their levels of academic motivation. This study explored the etiology of individual differences in enjoyment and self-perceived ability for several school subjects in nearly 13,000 twins aged 9–16 from 6 countries. The results showed a striking consistency across ages, school subjects, and cultures. Contrary to common belief, enjoyment of learning and children’s perceptions of their competence were no less heritable than cognitive ability. Genetic factors explained approximately 40% of the variance and all of the observed twins’ similarity in academic motivation. Shared environmental factors, such as home or classroom, did not contribute to the twin’s similarity in academic motivation. Environmental influences stemmed entirely from individual specific experiences.

Children in different classes did not rate their enjoyment of the subjects or their self-perceived ability less similar than those in same classes, with equal genetic (A), shared (C) and non-shared environmental (E) estimates for the two groups. We also tested the assumption that the effect of the first formal teacher may have a continuous or delayed effect on later motivational levels by splitting the sample at 9 years of age by whether the children were taught by the same or different teacher at age 7. The ACE parameters could be equated when the UK sample was split by whether the twins attended the same versus different classes at age 7. In other words, no class-wide effect on contemporaneous or later levels of enjoyment and self-perceived ability was found (see Table B.4, Table B.5, Table B.6, Table B.7, Table B.8, Table B.9 in the Appendix).