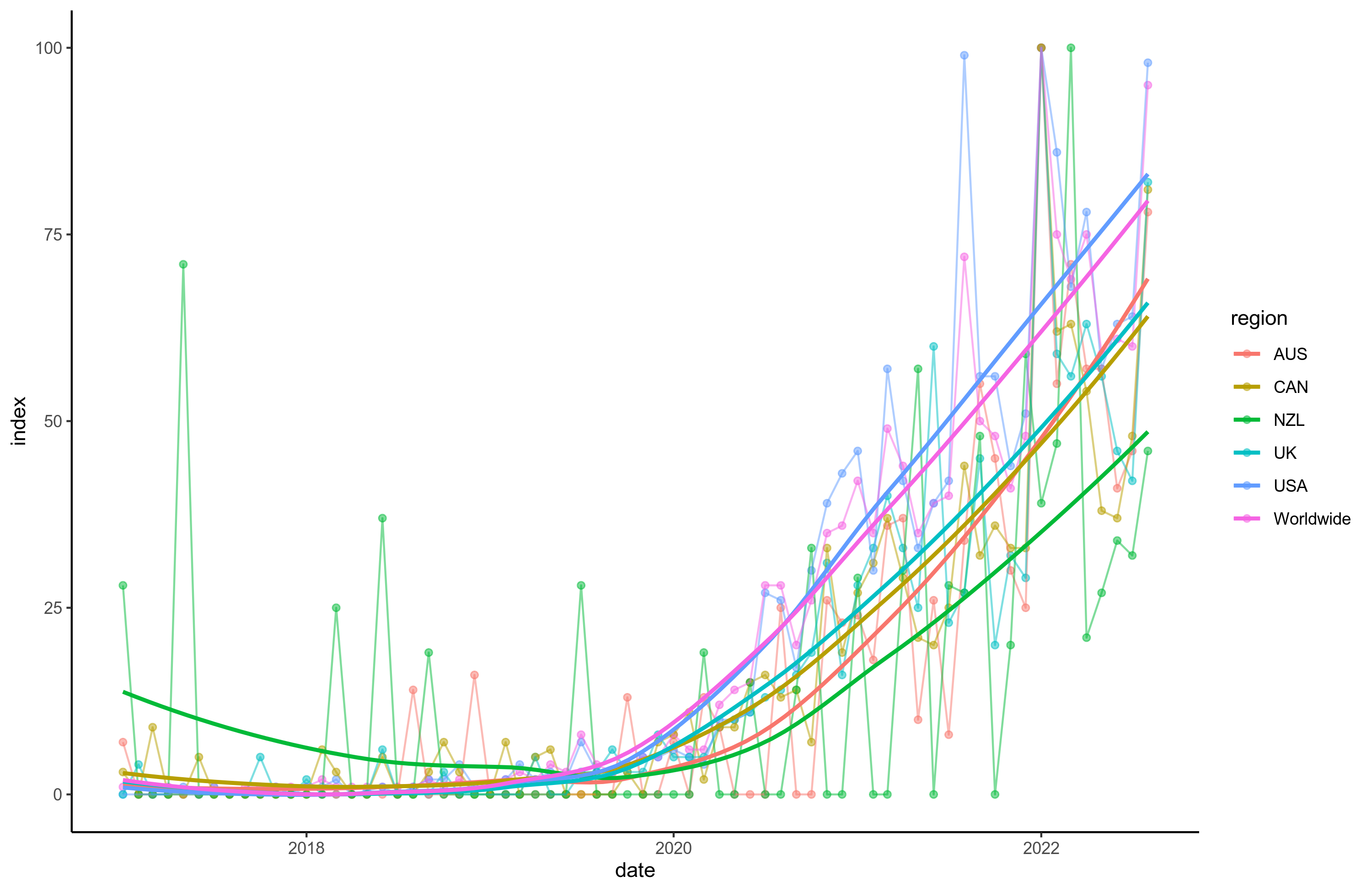 Substack is doing well. They have successfully avoided being woke censors so far, even avoided COVID censorship while everybody else was toeing the party line. Back in January, they published a piece about their minimal censorship stance: Society has a trust problem. More censorship will only make it worse:

This position has some uncomfortable consequences. It means we allow writers to publish what they want and readers to decide for themselves what to read, even when that content is wrong or offensive, and even when it means putting up with the presence of writers with whom we strongly disagree. But we believe this approach is a necessary precondition for building trust in the information ecosystem as a whole. The more that powerful institutions attempt to control what can and cannot be said in public, the more people there will be who are ready to create alternative narratives about what’s “true,” spurred by a belief that there’s a conspiracy to suppress important information. When you look at the data, it is clear that these effects are already in full force in society.

It’s obvious. The more you censor, the more people know there is censorship, so the less they trust what is published, as they know it is a biased sample of what was written or was going to be written, reading to low trust. When the censorship is one-sided, this leads to a large political gap in trust in media — which is exactly what we see. Instead, one has to make guesses about what the truth might be if only free discussion was allowed. So Substack aims for this free discussion. So far anyway.

But let’s look at some numbers. How well is Substack doing? Alexa rankings no longer exists to provide free traffic stats, and I can’t find a free good alternative for traffic numbers. However, Google Trends provides us with relative search interest numbers, which are a good and so far free alternative. As Substack was founded in 2017, I’ve limited the time to this period:

Here I’ve included data for the largest English speaking countries that provide the most data. Each country shows strong growth, with the strongest growth in USA itself. I wouldn’t make much of the New Zealand outlier because the data for it is very noisy due to a small population.

Substack’s competitors are the ‘traditional’ online places to publish your thoughts. These are Facebook (some people actually write long posts on Facebook walls), magazines/newspapers, self-hosted blogs, and other hosted blogs like Medium.com, Blogspot, and WordPress. Of these, the most important to me are Quillette and Medium. Here’s Quillette’s worldwide data:

It topped in July 2019. I’ve talked to a bunch of people about why Quillette is failing so hard. The answers I got were: 1) increased censorship by the editors, presumably to avoid attacks by the legacy media and various left-wing writers. 2) Claire Lehmann’s extremist COVID restrictionist stance. To be fair, she is Australian, so her opinion is normal for her country, but extreme by world standards. But Quillette has a strong libertarian bent, and then having an editor who is strongly against freedom is just a poor sell for the readers. In fact, previous Quillette subeditor Toby Young left to start his own libertarian-conservative Magazine with a pro-freedom angle, Dailysceptic. The second theory doesn’t fit because Quillette started declining before COVID, and the largest spike it had in the trends since was during COVID in June 2020. Googling the most popular articles from then gives this list:

If I had to guess, I would say the big traffic spike was caused by the two pieces by two popular African conservative intellectuals about the Summer of Floyd: John McWhorter  and Glenn Loury. Quillette has now implemented a paywall or login-wall of some sort, I am sure this will contribute to its rapid decline as no one wants to deal with that stuff.

Looking at similar magazines, Reason.com also seems to be in decline over this period:

While Medium.com is went up and then down:

I believe the spike is due to a popular COVID article posted in March 2020, that was subsequently censored. I posted the archive of it. Medium has since then been heavy on censorship for the usual reasons that the establishment always uses. 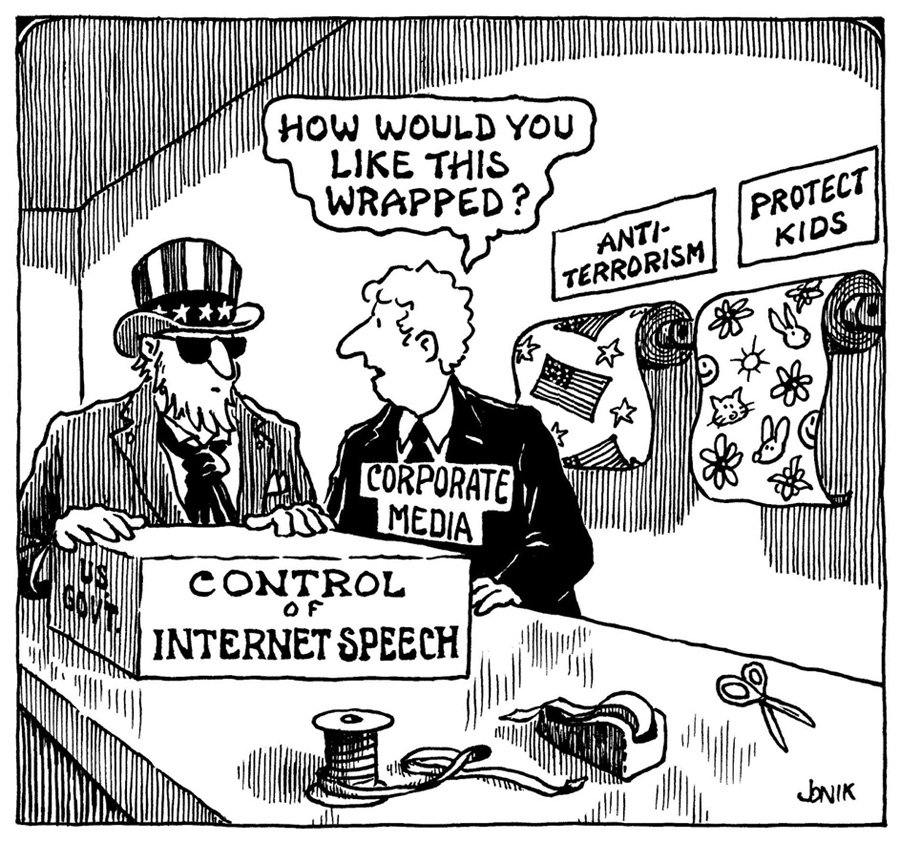 Notice how both options here are part of public safety.

Unz.com, probably the least censorious multi-blog is also holding steady despite the founder’s increasingly extreme opinions about COVID and everything else conspiracy theorist:

This is somewhat remarkable because Unz.com has been censored by both Facebook and Google which caused a large decline in new visitors for a while, but it was able to rebound.

Personally, Substack has been working out great so far. Here’s my growth curve: 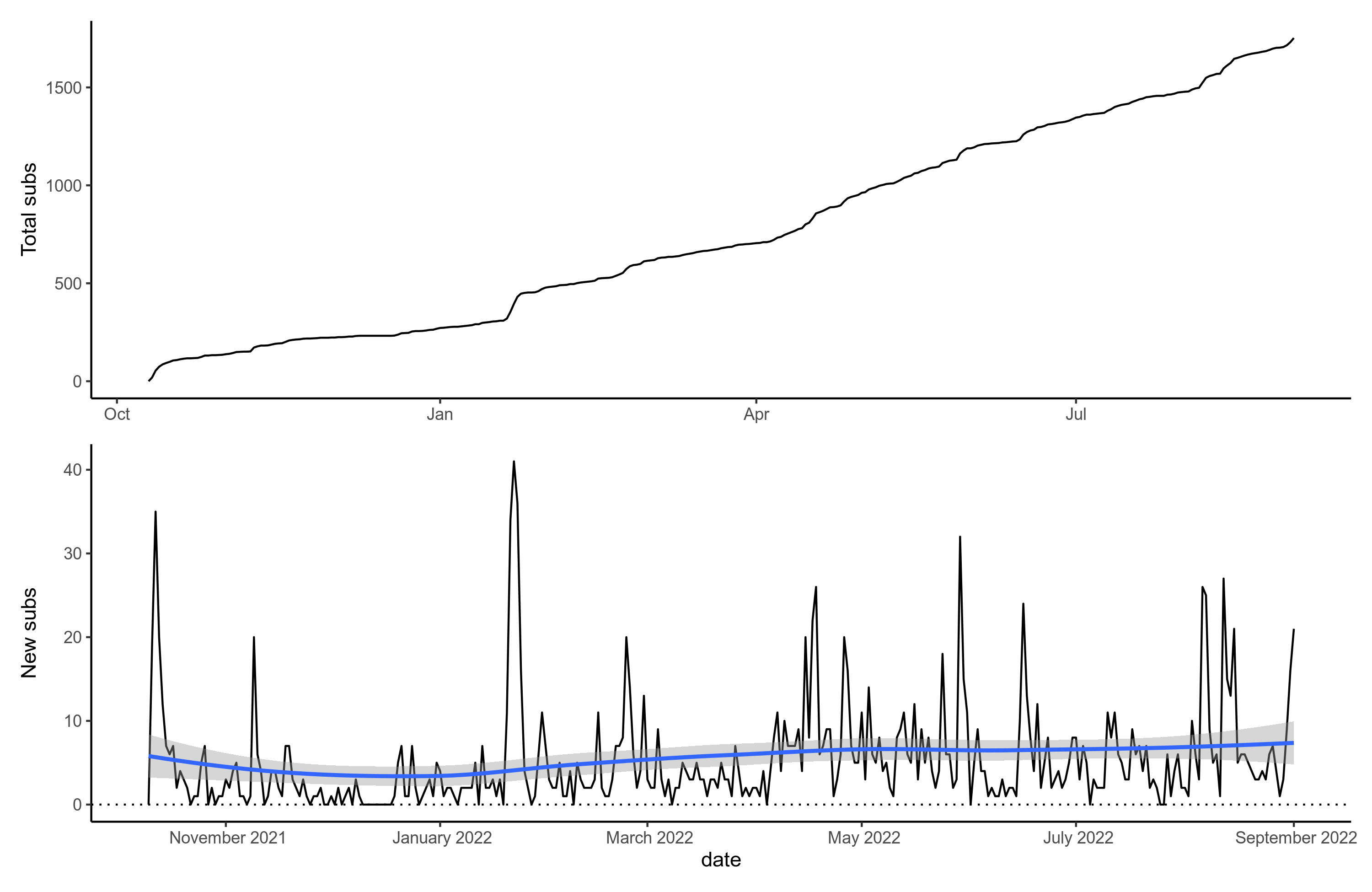 The top plot shows the total subscriber count (free and paid), while the bottom shows the new subscribers per day. So the latter is the growth rate, which has a slight upwards slope (accelerating growth). Substack has been working out much better than expected. At the start of the year, I forecast that my end of 2022 sub count to be 895, and the number as of writing is 1,754, so I will surely be losing a lot of Metaculus points on this one by being too pessimistic.

My interpretation of the growth of Substack is that readers don’t actually bother using RSS feeds, so whether they will follow up on your blog is really down to whether they will remember to check the website (most won’t), or whether they will see the content referred to again somewhere, e.g. on their Twitter feed (most won’t). There were email subscriptions for traditional blogs, but I’ve never used them. That seems to have been a big mistake! Second, the Substack blogs are all using the same theme which is visually appealing, and makes for a nice uniform reading experience across many writers. Third, Substack has successfully combined the online mini-subscription approach of Patreon, Hatreon, Subscribestar etc. with an outlet for writing, audio and videos, allowing content creators to earn money easily. Substack takes a hefty free of ~10% (plus currency exchange) but this is still better than having to make users use two different platforms (e.g. WordPress + Patreon).

In terms of traffic, it is very much a hit or miss for individual posts, along with steady growth due to the growing email sub count: 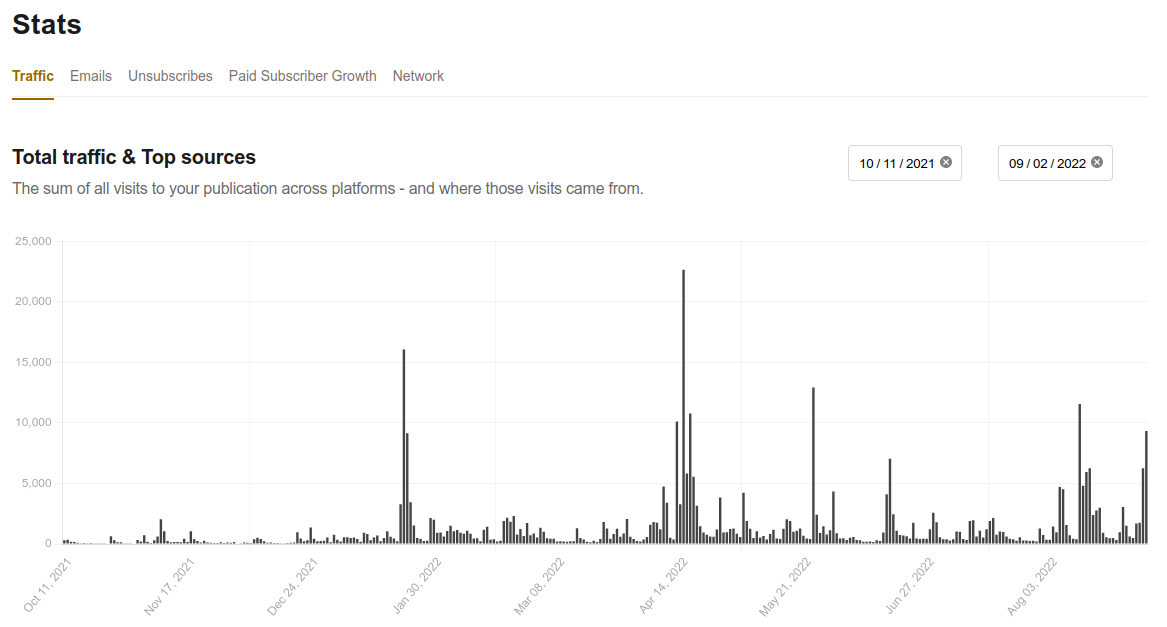 Aside from evading the censorship of other outlets, there are a few other advantages of writing your own blog. First, there are no restrictions in terms of word limit, figures, italics and so on. Writing for other outlets can be seriously annoying due to these limits, with editors rephrasing your carefully worded sentences into something false, changing or moving your figures, deleting tables and so on. Substack doesn’t even support tables, so one has to make screenshots. Second, there is no publication delay. When you click publish, it is immediately sent out! Anyone who has written for scientific journals knows about the absurd delays (sometimes multiple years). That’s why preprints are so great as they remove this artificial and harmful delay on science. Self-publishing does the same thing for other content.

What about the risk of future censorship? Their content policy is actually very censorious, so they could start censoring at any time:

We want Substack to be a safe place for discussion and expression. At the same time, we believe that critique and discussion of controversial issues are part of robust discourse, so we work to find a reasonable balance between these two priorities. In all cases, Substack does not allow harassment or threats.

We don’t allow content that promotes harmful or illegal activities, including material that advocates, threatens, or shows you causing harm to yourself, other people, or animals.

These are the same rules that are used to fine people all the time, arrest teenagers for Facebook comments and so on. The legal framework is already in place. The censorship of Substack depends solely on the executives not ordering the lawyers to start following the rules in the way these rules are used everywhere else.

Due to this, I am short-term optimistic about Substack, and a long-term pessimistic. These content guidelines have to be removed for long-term survival. But short-term, as the service is currently enjoying a large market advantage due to low censorship and their other innovations, it would be foolish for the executives to give it up. So they won’t for now, but they they might in 2 years time.

Still, I think it is well worth using Substack. Chances are that your writings aren’t the first (or ever) to be censored anyway, so you don’t have to worry about that. My advice is thus the same as that by Bryan Caplan, and Richard Hanania: forget about submitting stuff to Magazines, just set up a Substack!