Seriusly? Perhaps geting kids with myopia is not such a bad idea. Multiple studis show that IQ is korelated with myopia. Thats rather stranj.

I red the Wikipedia artikle and desided to take a kloser look at the papers given as referenses:

A number of studies have shown the incidence of myopia increases with level of education,[60][70] and many studies[72] have shown a correlation between myopia and a higher intelligence quotient (IQ).

A 2008 literature review writes that studies in several nations have found a relationship between myopia and higher IQ and between myopia and school achievement. A common explanation for myopia is near-work. Regarding the relationship to IQ, several explanations have been proposed. One is that the myopic child is better adapted at reading, and reads and studies more, which increases intelligence. The reverse explanation is that the intelligent and studious child reads more, which causes myopia. Another is that myopic children have an advantage at IQ testing which is near-work because of less eye strain. Still another explanation is that pleiotropic gene(s) affect the size of both brain and eyes simultaneously. According to the two most recent studies, higher IQ may be associated with myopia in schoolchildren, independent of books read per week.[73]

Other personal characteristics, such as value systems, school achievements, time spent in reading for pleasure, language abilities and time spent in sport activities correlated to the occurrence of myopia in studies.[74][75]” (Wiki)

Are children with myopia more intelligent? A literature review.

Bonus point to the authors of this paper for publishing it in an obskur polish journal, and thanks to Wikipedia for using an obskur abreviation “Ann Acad Med Stetin” to meen “Annales Academiae Medicae Stetinensis (Warszawa)“. Thankfuli, ther is a very useful site that kan konsert such obskur abreviations into ful names. Not eeven the danish state library (Statsbiblioteket) has akses to this journal, so i kan only quote the abstrakt and kant analyse their analysis of the data. Naturaly, i wud hav wanted the data myself so i kud do som analysis of it:

MATERIAL AND METHODS: A review of the literature concerning the relationship between refractive errors and IQ was done.

RESULTS: In 1958 Nadell and Hirsch found that children in America with myopia have a higher IQ. A similar relationship has been described by other researchers from the USA, the Czech Republic, Denmark, Israel, New Zealand, and Singapore. In other related studies, it was reported that myopic children regardless of their IQ gain better school achievements–table 1. It was also observed that schoolchildren with hyperopia have a lower IQ and gain worse school achievements–table 2. Several hypotheses explaining the relationship between refractive errors and intelligence have been published. Recently, Saw et al. concluded that higher IQ may be associated with myopia, independent of books read per week, in schoolchildren. According to them “the association between genetically driven IQ and myopia of hereditary predisposition could be forged because of a pleiotropic relationship between IQ and myopia in which the same causal factor is reflected in both genetic traits. There may be similar genes affecting eye size or growth (associated with myopia) and neocortical size (possibly associated with IQ)”.

CONCLUSIONS: The conducted clinical observations suggest that children with myopia may have a higher IQ. This relationship is most probably determined by genetic and environmental factors.”

IQ and the association with myopia in children.

This studi is reely good:

To evaluate the association between intelligence and myopia in children.

Here is the table from the paper with the resulting after “controlling for age, gender, school, parental myopia, father’s education, and books read per week”:

The nekst paper is interesting from a rasial siens/anthropoloji perspektiv.

Prevalence of Myopia in the United States

An older studi of the prevalens of myopia in the US. The data seems to put the three major rases into the familiar patern: Eest asian<Wites<Blaks, this time in prevalens of myopia. This order is ekspekted bekus of the IQ order of the rases. Here is the table from the paper: 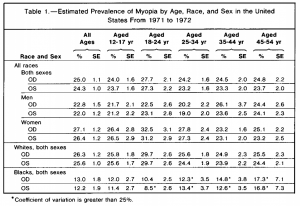 Kuriusly, and not konsistent with the prediktion derived from IQ, is that men hav les myopia than women. Given that ther is a small IQ advantaj for men (about 5 IQ), wun wud ekspekt men to hav almost as bad eyes as Eest asians with their IQ advantaj (about 7 IQ). They hav not, they hav myopia. However, ther is reeson to ekspekt evolution to hav found ways to make men smarter (for watever reeson that is) wile stil avoiding myopia, perhaps at ekspens of somthing els. The reeson is that hunting, wich is wat men did, is harder with wors vision.

The last paper is by som of the same authors as the paper abov.

As the IQ rose (Flynn Effect) so did the prevalens of myopia! That is rather stranj. Especialy given that the standard eksplanation for the rising IQ is beter nutrition. Does beter nutrition reely kaus peeple to hav wors vision? It is posible however od. My hypothesis is this: Ther ar multiple diferent prosesses by wich the eys/kranium grow. Som of thees benefit mor from beter nutrition than others. Those that do ar those that result in myopia. This seems to eksplain the data. I hav, ofk, no hard evidens that konfirm this hypothesis. Here is the relevant table from the paper: 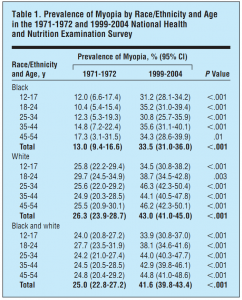 The seks diferens is stil ther: 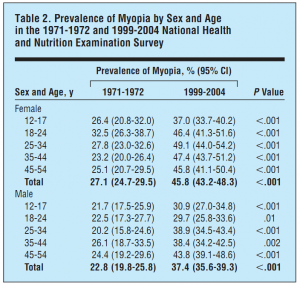