An interesting study has been published:

This is relevant to the study of polymathy, which of course involves making broader contributions to academic areas. The authors’ own abstract is actually not very good, so here is mine: They sent a personality questionnaire to two random sample of scientists (diabetes researchers). This field was chosen because it is large and old, thus providing researchers with lots of researchers to analyze. They sent out a couple of thousand of these questionnaires and received received 748 and 478 useful answers. They then hired some other company to provide information regarding the researchers. To measure depth vs. breadth, they used the keywords associated with the articles. More different keywords means more breadth. They used this information as well as other measures and their personality measures in four regression models: 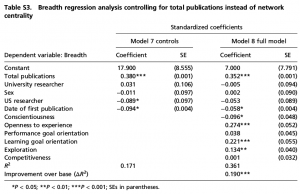 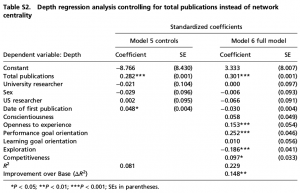 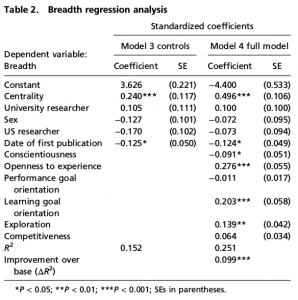 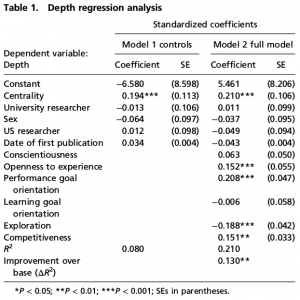 The difference between the sets of regression models is the use of total publications vs. centrality as a control. These variables also correlate .52, so it not surprisingly made little difference.

Of note in the results: Their measures of depth and breadth correlated strongly (.59), so this makes things more difficult. Preferably, one would want a single dimension to measure these along, not two highly positively correlated dimensions. The authors claimed to do this, but didn’t:

The two dependent variables, depth and breadth, were correlated positively (r = 0.59), and therefore we analyzed them separately (in each case, controlling for the other) rather than using the same predictive model. Discriminant validity is sup- ported by roughly 65% of variance unshared. At the same time, sharing 35% variance renders the statistical tests somewhat conservative, making the many significant and distinguishing relationships particularly noteworthy.

Openness (5 factor model) correlated positively with both depth and breadth, perhaps just because these are themselves correlated. Thus it seems preferable to control for the other depth/breadth measure when modeling. In any case, O seems to be related to creative output in these data. Conscientiousness had negligible betas, perhaps because they control for centrality/total publications thru which the effect of C is likely to be mediated. They apparently did not use the other scales of the FFM inventory, or at least give the impression they didn’t. Maybe they did and didn’t report because near-zero results (reporting bias).

Since the correlation matrix is published, one can do path and factor analysis on the data, but cannot run more regression models without case-level data (ETA 2018: actually, one can do this using path models based on the matrix). Perhaps the authors will supply it (they generally won’t).

The reporting on results in the main article is lacking. They report test-statistics without sample sizes and proper (d or r, or RR or something) effect sizes, a big no-no:

Since they don’t mention the SDs, one cannot calculate r or d from their data I think. Unless one can get it from the t-values (not sure). One can of course calculate relative ratios using their mean values, but I’m not sure this would be a meaningful statistic.

Their model fitting comparison is pretty bad, since they only tried their preferred model vs. an implausible straw man model:

Not quite sure how this was done. Too little information given. Did they use item-level modeling or? It sort of sounds like it. Since the data isn’t given, one cannot confirm this, or do other item-level modeling. For instance, if I were to analyze it, I would probably have the items of their competitiveness and performance scales load on a common latent factor (r=.39), as well as the items from the exploration and learning scales on their latent factor, maybe try with openness too (r’s .23, .30, .17).

Of other notes in their correlations: Openness is correlated with being in academia vs. non-academia (r=.22), so there is some selection going on not just with general intelligence there.