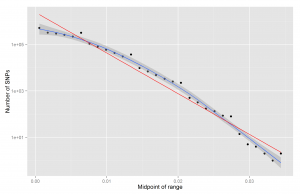 Due to the way statistical power works, we first find the variants with the largest effects. Making the assumption that we find the SNPs in the exact order of their effect size (only roughly true, empirically resolvable by those with access to data), we should be able to derive estimates of the number of SNPs needed to explain any given proportion of the heritable variation. Probably, we cannot estimate this with certainty if the proportion is set at 1 (100%), but we should be able to find decent estimates for e.g. 10%, 20% and 50%. Thus, we can introduce a specific measure of the degree of polygenicity: the number of variants needed to explain n% of the heritable variance. I propose the term n% genetic cardinality for this concept. This sets all the traits on the same scale and it should be calculable for any trait where there is a large GWAS.

An alternative measure would be to use the distribution parameters of the power law (or some other alternative, like negative binomial), but this would be more complicated to understand and estimate. The advantage is that it would be be less noisy. Can we estimate some numbers for a few traits just to showcase the concept? Perhaps. There are some traits where we have found SNPs that explain most of the variation. If we set n%=50, then we can find the values in papers discussing these traits perhaps.

Liu et al 2010 studied eye color in the Dutch and found that a 17 SNP model predicted about 50% of variance in a cross-validation sample. Actually, a single SNP accounted for ~46% variance in itself. 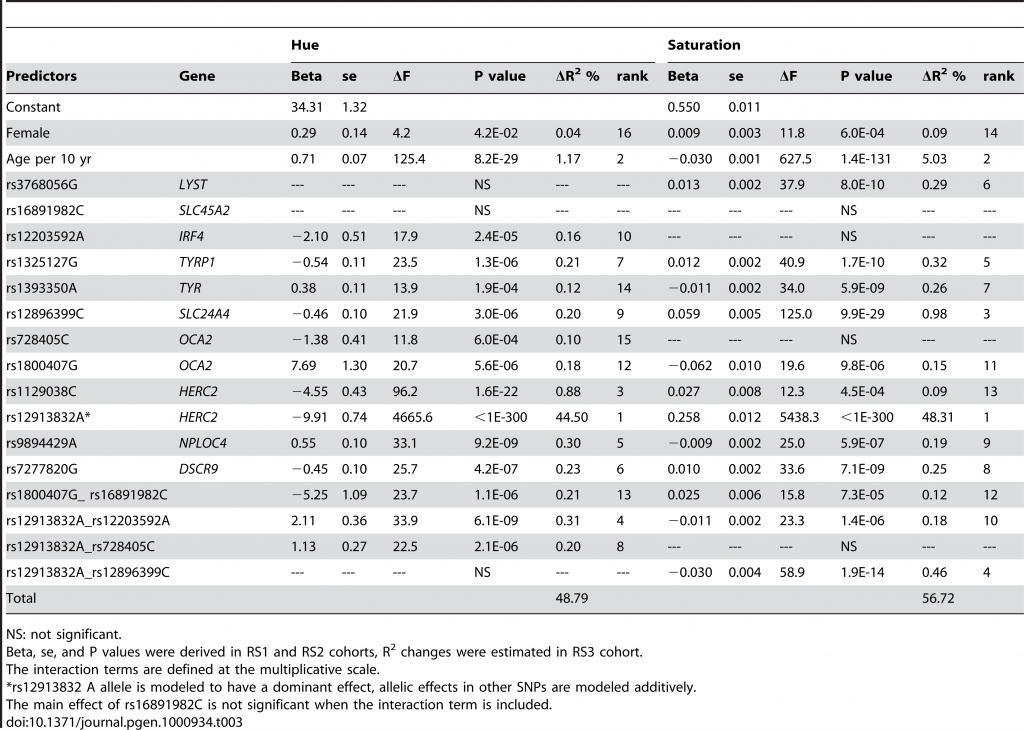 This means that for this trait, if we set n to be anything ~45 or below, the number will be 1. Most traits are not like this. However, I was not able to find more easy examples like this. Most studies just report a bunch of p-values which are near useless.

Liu et al 2015 report on skin color variation in Europeans and find that the top 9 SNPs explain 3-16% (depending on measure and sample).

Bergholdt et al 2012 writes that “The estimated proportion of heritability explained by currently identified loci is >80%”. However, I could not find support for this in the given reference (Wray et al 2010). I could not even find the number of SNPs they are talking about.

What is needed is for researchers to publish plots that show cumulative R2 (explained variance, preferably in an independent sample) by number of SNPs in order of largest effect sizes (assuming no complicated inter-predictor relationship-related shenanigans…). This would allow for easy comparison of genetic cardinality of traits.

These people actually did use a metric like I proposed.