In the SSC subreddit, someone reposted that data showing the strong race bias in the admission process for medicine. I reposted it on Twitter with some snark, to the usual effect:

How racism looks like. I recommend keeping this in mind when you choose a doctor. https://t.co/0RzYyaT1gq pic.twitter.com/ftVX5uvMDg

Of course, someone stepped forward to argue the ‘tests are biased’ view. While one could rule this out on implausibility grounds given the mountains of other evidence on the lack of test bias, a more direct approach is evidence for post-admission outcomes showing that outcomes for the groups receiving undue admission are worse than those for the others. While we’d really like hard data on actual work outcomes like patient satisfaction, malpractice lawsuits, patient death, objective measures of e.g. surgery skill, correct diagnosis, these are really hard to find. However, we can get data from end-of-training tests which are used to award people their professional licenses. So I digged around a bit and found a lot of stuff. It’s often to be found in local reports, not journal articles, but we don’t care.

The forbidden conclusion: when the data shows one thing, but the conclusion is dictated from above. https://t.co/umf0toQg02 pic.twitter.com/bo32uACWzo

In law, as in medicine. If you want more competent lawyers you will get fewer persons from low scoring groups. https://t.co/kBCQez0Sbd pic.twitter.com/TnpZTyNHf4

How do we get rid of pesky group differences in exam pass rates? It's easy enough. We pass just about everybody. https://t.co/HCJxqPqqty pic.twitter.com/TFG7zO33mQ

In the quite likely event that Twitter collapses or censors even more, here’s some of the sources:

There were many, many more. Many are compiled by an organization called Center for Equal Opportunity, which despite the name, actually is fighting for equal opportunity (not equal outcomes). But one can also just look up some of the papers on Google Scholar and see the citing papers. And Google is quite good at finding the reports. A useful query is “pass rate” race white black asian filetype:pdf. 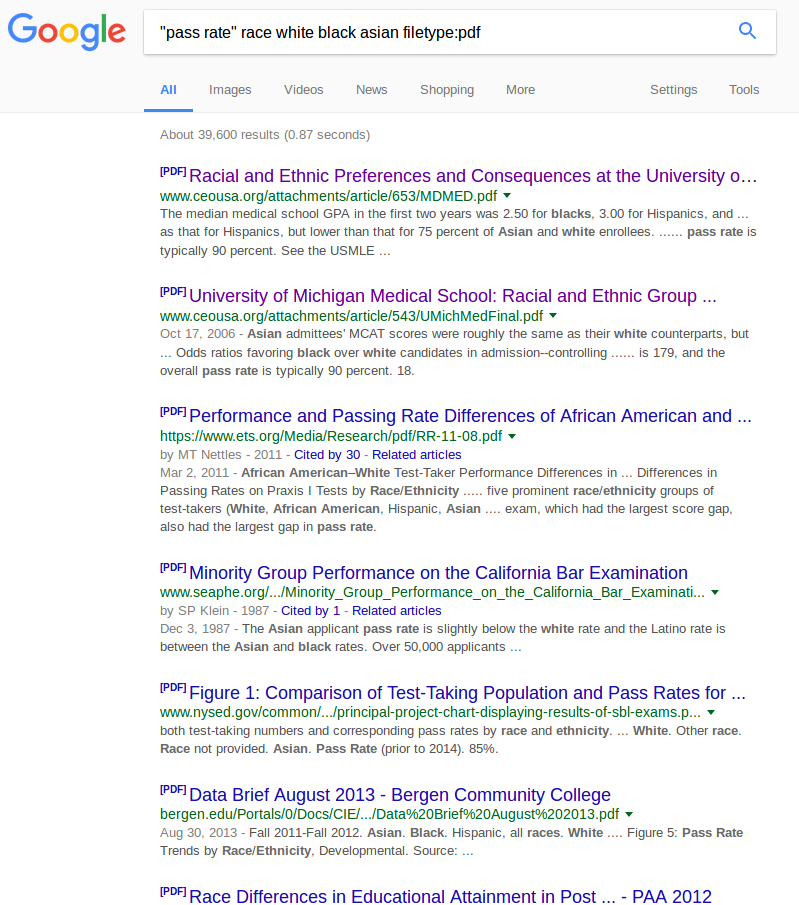 For those interested in the more serious research on pass rates, I recommend reading Arthur Jensen’s 1980 book Bias in Mental Testing, and La Griffe du Lion’s writings. Very briefly, pass rates are a non-linear transformation of an interval score (like IQ, SAT, MCAT etc.). Group differences in pass rates can be artificially reduced similar to normal interval-level gaps. This done easiest simply by lowering the bar and making sure that just about everybody passes. The classic case study of this is Linda Gottfredson’s Racially gerrymandering the content of police tests to satisfy the U.S. Justice Department.

The results of biasing the admissions are simple enough to foresee: worse personnel — doctors, police, nurses, lawyers etc. — for everybody and thus less overall society-wide efficiency. Furthermore, because of the post-graduation differences in job performance, it will be rational for patients, employers etc. to apply their own covert and rational racial discrimination in the opposite direction. Racism fosters counter-racism and increase social strife.

Looking for commenters for our Admixture in the Americas target article