I was doing some work on my first name study preparing it for publication and was reading some old papers.

The relation between rated social desirability of first names and socio- metric popularity status in elementary-school children was investigated. Popularity status was found to be highly correlated with the social desirability value of the individuals first name as rated by members of his own organized youth group. However, more surprisingly, it was found that popularity was also correlated significantly with social-desirability values of names as rated by members of other groups relatively unfamiliar with the individual bearing that name. This latter correlation suggests certain social handicaps upon the child who bears a “socially undesirable” name, as well as important methodological contamination in sociometric studies of children’s groups.

The TL;DR version is that they had 59 Jewish kids rate 49 first names for social desirability. These were the names of the kids in the group. They also asked the kids who they liked among each other. Then they correlated these values, which gave r = .63. Not so surprising given likely bias from knowing persons with the name, but then they used a cross-group design where kids only rated other kids’ names they supposedly didn’t know well. In this case, the correlation was still strong, r = .49. Quite high accuracy apparently. I was writing this up in my nice introduction, but decided to read some more studies, so…

The relationship between first name desirability and popularity was studied using 780 boys and 768 girls from six elementary schools. Girls’ popularity, as demonstrated by positive sociometric choices, was significantly related to the desirability of their first names. There is also a slight indication that boys’ popularity with girls was influenced by the boys’ first names. Sociometric rejections were not related to first name desirability for either boys or girls. The findings for girls remained significant when the effects of parental education and ethnicity were partialled out; the single finding for boys did not. 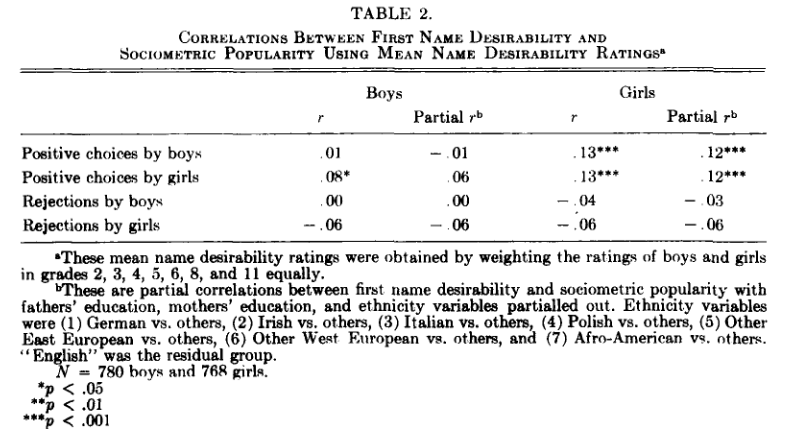 A hint of accuracy for girls’ names, but nothing much generally. Various robustness checks also found not much at all. Despite this, authors were pretty (overly) nice about it:

But why the stronger relationship for girls? Perhaps girls might be more affected by their first names because girls are more concerned than boys with how they present themselves to other people. First names, broadly speaking, are a part of any such presentation

The relationships found between first name desirability and popularity are very small, but it would be surprising if the relationships were other than small. First names are only one of many personal attributes and characteristics that may produce stereotyped expectations in the eye of the beholder. Ethnicity, race, physical attractiveness, eyeglasses, stature, and hair color are a few others.

Lee Jussim would then ask: So, what’s the citation counts? 105 vs. 34, giving rates of 2.02 and 0.87 per year. The initial, small study gets cited at a rate of more than double the 25 times larger replication. Nothing much seems to have changed in psychology but it must.

On being right and avoiding being wrong

Secular genetic-phenotype paradoxes: the Flynn effect and beyond