Heights and weights were analysed for 636 twins who had been repeatedly measured from birth to 4 years. MZ twins were less concordant for birth weight than DZ twins, principally as a result of a few MZ pairs who exhibited very large differences. By one year of age, however, MZ twins had become more concordant for weight (Rmz=0·87) while DZ twins moved further apart (Rdz=0·55). For height, at birth, the MZ correlation was 0·58 while the DZ correlation was 0·8, but by 2 years, the MZ correlation reached 0·89 and the DZ correlation regressed to 0·58. The actual size differences within pairs followed a parallel course—for MZ twins, the differences became smaller following birth, whereas the DZ differences became larger. The results are discussed in terms of (a) prenatal influences that differentially affect birth size within MZ pairs and DZ pairs, and (b) the rapid convergence of each twin on his genetic growth curve. 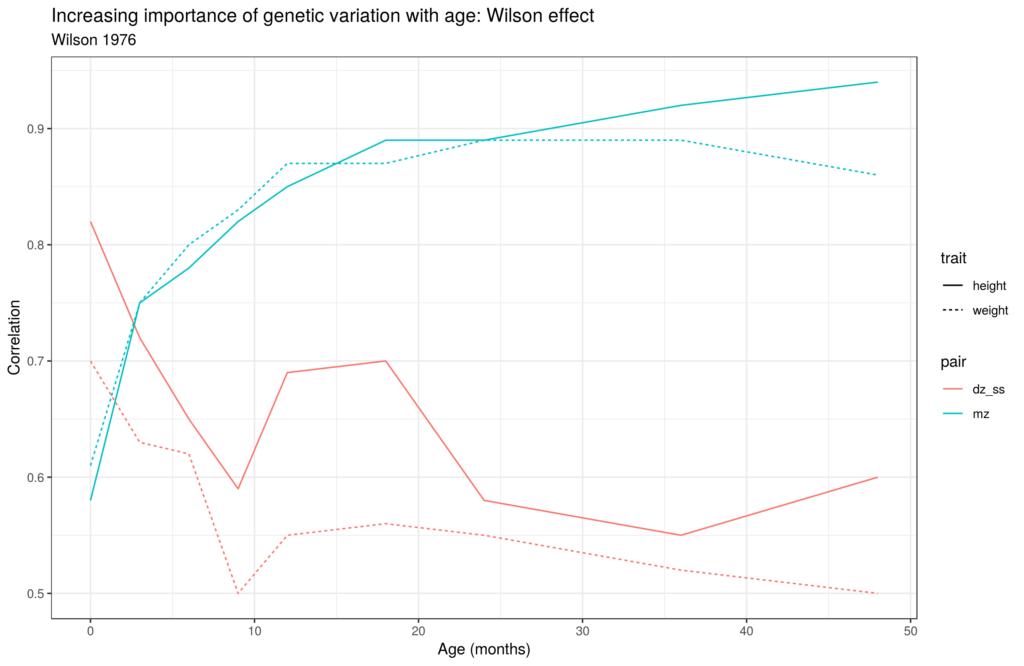 The present paper appraises the degree of concordance in physical growth for monozygotic (MZ) twins and dizygotic (DZ) twins. The genotype is expected to play a substantial role in growth, leading to greater concordance for MZ twins, but this expectation is tempered by several other factors which would affect birth size and subsequent growth. The twins in each pair, whether MZ or DZ, share many prenatal influences and are delivered at the same gestational age, which should increase their similarity in birth size. For DZ twins, this might make them more concordant at birth than predicted on the basis of genetic overlap alone.

By contrast, about 70 per cent of MZ twins are born with monochorionic placentas, and most of these placentas are subject to varying degrees of vascular anastomosis (Bulmer, 1970; Strong and Corney, 1967). If the anastomosis results in unequal nutrition being supplied to the twins, it would accentuate the within-pair differences in birth size. Naeye, Benirschke, Hagstrom and Marcus (1966) have reported greater within-pair variability for monochorial twins, and on occasion a dramatic example of this transfusion syndrome may be found (e.g. Falkner, 1966).

In other words, a temporary environmental effect disturbs development of MZs more than DZs and they thus show more variation despite near identical genetics. After birth, the environmental effect is removed and the genetically controlled growth pattern results in increasing similarity due to the smaller twin catching up towards genetic set point.

Can we make humans that are 1,000 SDs smarter than current humans?