The theory seems obvious: since stereotypes are just beliefs about groups, having more accurate stereotypes would be expected to be related to intelligence, just as having more accurate beliefs on most other topics relates to intelligence. The theoretical expectation of stereotype accuracy and intelligence is stronger because it’s a direct test of pattern recognition with obvious fitness implications: if you can’t grok the other sex, you can’t figure out how to date them successfully; if you mistake a dangerous person for a friendly one, you might end up dead.

The stereotype accuracy literature is not that large (maybe 15-30 studies), and generally suffers from reliance on small convenience samples. But still, are there any that have looked into this obvious idea? I know of only 3. In general, there aren’t that many studies that look at correlates of individual level accuracy, as Jussim (2012, p. 398) summarizes:

On average, personal stereotypes corresponded well with groups’ attributes (individual beliefs about groups correlated moderately to highly with criteria). Nonetheless, some personal stereotypes were highly inaccurate. Nearly all of the studies reporting personal stereotype accuracy correlations found at least some people with very low — near zero — correlations. Whether these are simply more or less random fluctuations and measurement error or whether some people are systematically more accurate than others is an important question for future research. Possible candidates would be intelligence (are smarter people more accurate?), education (are more highly educated people more accurate?), exposure to and experience with groups (the “contact hypothesis” [e.g., Allport, 1954 / 1979 ] has long suggested that contact with a group reduces prejudice, in part, by disconfirming erroneous stereotypes), nonverbal sensitivity (actually, Hall & Carter [ 1999 ] have already showed that people lower in nonverbal sensitivity hold less accurate sex stereotypes, but it would be useful to see if this pattern replicates), and ideology/motivated egalitarianism (several of the studies suggest indirectly that the more people are motivated to deny real differences, the less accurate their stereotypes, and Wolsko, Park, Judd, and Wittenbrink [ 2000 ] found this directly and experimentally).

Jussim only discusses one study that examined the link to intelligence (p. 332):

Ashton and Esses ( 1999 ) also performed a set of analyses that help shed some light on who was most and least likely to be accurate. In addition to the stereotype questions, perceivers also completed the Right Wing Authoritarianism (RWA) scale and two intelligence tests. For these analyses, they considered anyone who was within 0.6 SD of the real differences to be accurate. Th e 14 people who underestimated real differences (the standard deviation of their stereotypes was 0.6 SD less than the standard deviation of the real differences) scored very low on the RWA scale. Because the RWA scale is highly correlated with liberal versus conservative ideology (higher RWA, more conservative; Altemeyer, 1981 ), those scoring very low on the RWA are likely to be extremely liberal in their politics. One interpretation of this finding, therefore, is that those most likely to inaccurately underestimate real differences were liberals in denial about real group differences. Another aspect of their results makes this pattern even more amazing — intelligence did not matter for this group. Brainy liberals were just as likely as dumb liberals to inaccurately minimize real differences. Th is pattern suggests a link between liberal politics, a denial of difference ideology (discussed in Chapter 10; see also Ryan, 2002 ; Wolsko, Park, Judd, & Wittenbrink, 2000 ), and inaccuracy in social stereotypes. Th e 80 other participants scored much higher on the RWA scale than did the underestimators. Whether they all actually qualified as conservatives is unclear, but it seems unlikely given that this was a college sample attending a major urban Canadian university. Nonetheless, they were not as liberal as the underestimators. Among this group, intelligence mattered. Those who exaggerated real differences were not very smart. Th e group that was accurate, however, had intelligence scores at about the sample average (remember, these were college students and so, on average, probably had higher intelligence than the general population) and RWA scores that were much higher than those of the underestimators. 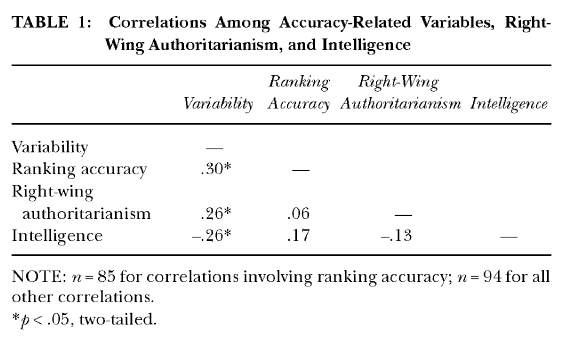 r = .17, p = 0.12 (“not quite within the conventional bounds of statistical significance”). Jussim is talking about an interaction that is in another table. Unfortunately, authors don’t report the model accuracy ~ intelligence * RWA, which would have been informative about the main effect of intelligence, which perhaps would be seen if a suppression effect of RWA was modeled simultaneously.

In general, the study is too small given the likely effect size of perhaps r = .20 to .40.

A nationally representative Danish sample was asked to estimate the percentage of persons aged 30-39 living in Denmark receiving social benefits for 70 countries of origin (N = 766). After extensive quality control procedures, a sample of 484 persons were available for analysis. Stereotypes were scored by accuracy by comparing the estimated values to values obtained from an official source. Individual stereotypes were found to be fairly accurate (median/mean correlation with criterion values = .48/.43), while the aggregate stereotype was found to be very accurate (r = .70). Both individual and aggregate-level stereotypes tended to underestimate the percentages of persons receiving social benefits and underestimate real group differences.

In bivariate analysis, stereotype correlational accuracy was found to be predicted by a variety of predictors at above chance levels, including conservatism (r = .13), nationalism (r = .11), some immigration critical beliefs/preferences, agreement with a few political parties, educational attainment (r = .20), being male (d = .19) and cognitive ability (r = .22). Agreement with most political parties, experience with ghettos, age, and policy positions on immigrant questions had little or no predictive validity.

In multivariate predictive analysis using LASSO regression, correlational accuracy was found to be predicted only by cognitive ability and educational attainment with even moderate level of reliability. In general, stereotype accuracy was not easy to predict, even using 24 predictors (k-fold cross-validated R2 = 4%).

We examined whether stereotype accuracy was related to the proportion of Muslims in the groups. Stereotypes were found to be less accurate for the groups with higher proportions of Muslims in that participants underestimated the percentages of persons receiving social benefits (mean estimation error for Muslim groups relative to overall elevation error = -8.09 %points).

The study was preregistered with most analyses being specified before data collection began.

This is of course my own study designed to check this hypothesis among other things. The main problem with it is the low reliability of the IQ test (5 items ICAR), so the value of .22 should be taken as an underestimate with an estimated reliability corrected value of perhaps around .30.

Superior cognitive abilities are generally associated with positive outcomes such as academic achievement and social mobility. Here, we explore the darker side of cognitive ability, highlighting robust links between pattern detection and stereotyping. Across 6 studies, we find that superior pattern detectors efficiently learn and use stereotypes about social groups. This pattern holds across explicit (Studies 1 and 2), implicit (Studies 2 and 4), and behavioral measures of stereotyping (Study 3). We also find that superior pattern detectors readily update their stereotypes when confronted with new information (Study 5), making them particularly susceptible to counterstereotype training (Study 6). Pattern detection skills therefore equip people to act as naïve empiricists who calibrate their stereotypes to match incoming information. These findings highlight novel effects of individual aptitudes on social–cognitive processes. (PsycINFO Database Record (c) 2018 APA, all rights reserved)

It’s too long to summarize, but in typical social psychology fashion, there’s a lot of suspicious p values indicating p-hacking or HARKing. The sample sizes are not that small, since they are based on MTurk data (n’s = 271, 246, 153, 172, 204, 211). They are quite suspiciously irregular, and the questionable p values suggest authors used a stopping rule. I would advise them to rerun their experiments with 3x sample size to assess reliability.

Given the above, what is really needed is a study that:

If you want to see this study carried out, email me. We need someone to design the survey and I will fund the money.