Sweden, the land of feminism, of course constantly demands the government produces reports that prove the sex gap in incomes is caused by men. So, the bureaucrats attempt to oblige and produce a stream of reports, all of which result conclusions like these:

The statistical analysis shows that the average pay difference can almost completely be explained by measurable factors. Large parts of the pay gap are due to more women than men working part time, the difficulty and difficulty of the gap, and because more men are bosses. Furthermore it is due to work content and payments being different across different parts of the government. There are also differences in education, experience, age, duration of employment, and which region the employee is in. The difference that remains, i.e. the unexplained pay gap, which cannot be explained by the measurable information which is found in the record was 1.3% in September 2009. [my translation]

The author of the Swedish book, Sex feministiska myter [6 feminist myths], then quotes another few conclusions like these. Since 2009, there’s been more reports for the state, and the timeline looks like this. 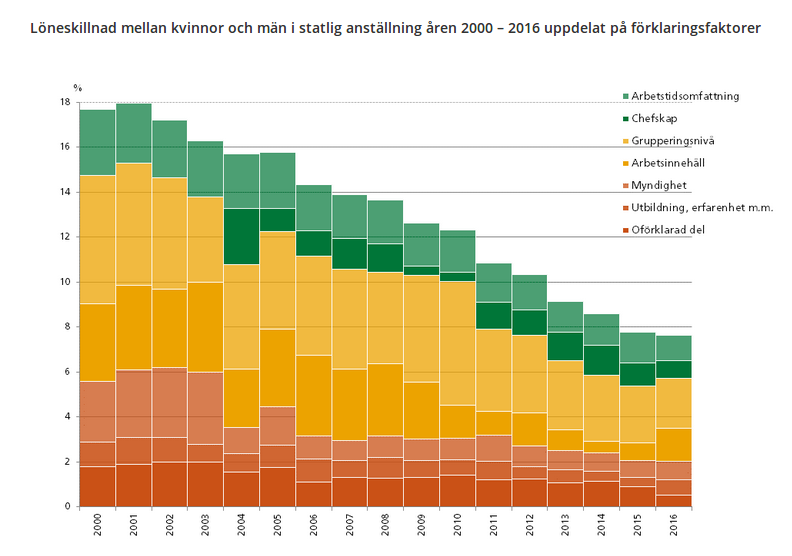 The last shade of red is the unexplained part, which stays roughly constant in proportion. The gap is shrinking fast in this part of the country, presumably due to whatever affirmative action they have on-going, and the increasing advantages of women in educations relevant for these jobs. It would be interesting to get a breakdown of the causes. Note that Sweden forces men to take child leave, so this of course reduces the gap in work hours but only by forcing families to earn less money by having the men go home. This would also reduce GDP somewhat.