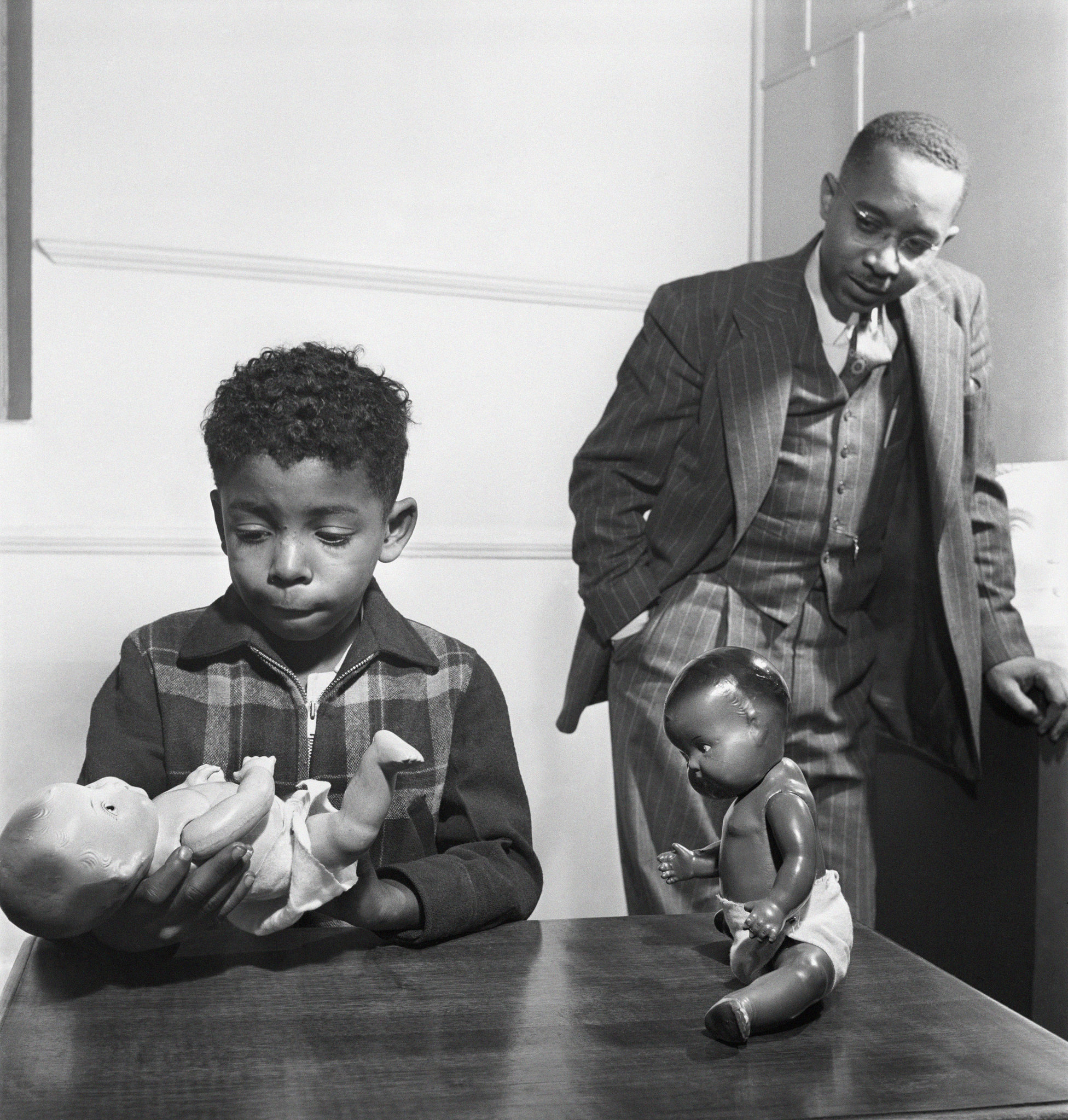 TL;DR social scientists produced research that was falsely interpreted by them to show that Africans in USA had lower self-esteem than Europeans and this was because of segregation, and they used this to push their views in the Supreme Court successfully.

Or, if you prefer long format, here is how Michael Levin summarizes it in his 1997 book Why Race Matters:

The Minnesota Multiphasic Personality Inventory is a widely used personality test, race differences on which are described for a number of populations in Dahlstrom, Lachar, and Dahlstrom’s MMPI Patterns of American Minorities (1986). Overall, blacks achieve higher average scores than whites on the Psychopathy, Schizophrenia, and Hyperactivity scales (Dahlstrom, Lachar, and Dalhstrom 1986: 29–31, 34, 36, 39, 41, 47, 95, 135), findings normally interpreted to show “estrangement and impulse-ridden fantasies … unusual thought patterns and aspiration-reality conflict” (Gynther 1968). Dreger and Miller (1960) also report higher black male scores on the Hypomania scale, taken to indicate “outgoing, sociable, and overly energetic patterns; tendencies to act impulsively and with poor judgment” (Dahlstrom, Lachar, and Dahlstrom 1986: 218). Black males tend to score higher on precisely the MMPI scales on which the prison population deviates from the population mean (Herrnstein and Wilson 1985: 189); elevated MMPI are equally predictive of criminal behavior for blacks and whites (Elion and Megargee 1975). It is striking, and surprised the investigators, that, while black males always exceed white males in Psychopathic Deviance and Hypomania, blacks who have attended integrated schools attain more deviant scores than those who have attended segregated schools (Dahlstrom, Lachar, and Dahlstrom 1986: 125–126, 245 Table D-11)—contrary to the hypothesis that segregation distorted the black personality. Shuey (1978) and others have also found that integration adversely affects the self-conception of black schoolchildren.

That black self-esteem is low is a virtual axiom of popular sociology (see, e.g., Schoenfield 1988). In Brown v. Board of Education (1954) the Supreme Court cited damage to self-concept caused by segregation, supposedly shown by an experiment in which black children from segregated schools preferred white dolls, as proof that “separate is inherently unequal.” The willingness of young black males to rob and kill for fashionable sneakers is attributed to a desperate need for peer approval as a source of self-respect. Fischer et al. (1996) state it as fact that de facto segregation “lower[s black] youths’ self-esteem and ultimately lower[s] their test scores” (197; also see 180). But, as in the MMPI study, black self-esteem is typically found to exceed white. According to Shuey,

[A]t the preschool level there seems to be some evidence of awareness of color differences and a feeling of inferiority associated with dark skin, but at the grade school level and continuing through high school and college there is no consistent evidence of lower self esteem in Negroes; if there is a difference, it would appear to be more likely that Negroes have a greater sense of personal worth, rather than the reverse. (1966: 512; also see Shuey [1978] for a review of literature concerning blacks and whites aged 3 to 8)

A survey of adolescent girls commissioned by the American Association of University Women (American Association of University Women 1991) indicated—to its sponsor’s apparent surprise, given the poor academic performance of black adolescents—that black females enjoy higher self-esteem than white. A study of body image found that while 90% of white females think they are too fat, only 12% of black females expressed dissatisfaction with their weight (Parker et al. 1995).49 Black boys do “not [allow] their achievement to affect their view of themselves”:

Bruce Hare, an educational researcher, has documented this process among fifth-grade boys in several schools in Champaign, Illinois [evidently Hare 1985]. He found that although the black boys had considerably lower achievement-test scores than their white classmates, their overall self-esteem was just as high. This stunning imperviousness to poor academic performance was accomplished, he found, by their de-emphasizing school achievement as a basis of self-esteem and giving preference to peer-group relations—a domain in which their esteem prospects were better. (Steele 1992, p. 74)

The doll experiment cited in Brown was duplicated with identical results for black children in integrated schools in the North (Seligman 1987), meaning either that integration harms black self-esteem as much as segregation, or that the doll test is invalid.

Literature reviews by Porter and Washington (1979), Crocker and Major (1989) and Baumeister, Smart, and Boden (1996) agreed in finding the self-esteem of black students equal to or higher than that of white students. Tashakkori (1993) and Tashakkori and Thompson (1991), in other review articles, also report that blacks consistently value themselves more highly than whites, the gap being smaller for blacks attending integrated schools. Like Hare and Steele, Tashakkori considers it likely that blacks do not use academic success as a standard of personal worth to the extent that whites do. At the same time, blacks in integrated schools are more aware of the shortfall in their achievements, given what is considered minimum performance in their surroundings. Many commentators explain low black self-esteem in terms of feelings of powerlessness; Tashakkori (1993: 597) reports that blacks do perceive themselves as more powerless than whites, but that this self-perception does not translate into lower self-esteem, apparently because blacks regard the self as less a locus of control.50 Lefcourt (1965) found that, faced with a choice between two risky situations with equal expected payoffs, one of whose outcomes depends on chance while the outcome of the other depends on agent response, blacks are more apt than whites to choose the chance alternative. Coleman et al. (1966: 289, Table 3.13.14) found black high school seniors considerably more likely than white to agree that “good luck is more important for success than hard work.”

Black students estimate their own academic competence more highly thanwhites despite their own objective and self-reported lower academic achievement (Hare 1985: Table 3; Tashakkori 1993: 597). Black high school seniors in the Coleman study were more apt than whites to classify themselves as “among the brightest,” and less likely to agree that “ ‘Sometimes I feel I just can’t learn,’ ” despite poorer academic performance (Coleman et al. 1966: 287–288, Tables 3.13.11, 3.13.12). Remarkably, southern rural blacks, whose academic performance fell below that of all other blacks as well as all whites, were more apt than other blacks to classify themselves as bright and able to learn. All told, “aspiration/reality conflict” is prominent in this literature. (Many teachers I have spoken to comment informally on their black students’ unrealistic expectations of becoming doctors or lawyers.) Anderson (1994) reports that black gang members believe they deserve to be treated as superior, which Baumeister, Smart, and Boden (1996) interpret as manifesting high self-esteem.

I am an important person.

It wouldn’t make me nervous if any members of my family got into trouble with the law.

I am entirely self-confident.

If given the chance I could make a good leader of people.

I have often had to take orders from someone who did not know as much as I did.

Deficient self-esteem does not seem indicated. In addition, blacks more readily agree that:

Most people will use somewhat unfair means to gain profit or an advantage rather than lose it.

Most people make friends because friends are likely to be useful to them. Most people are honest chiefly through fear of being caught.

It is not hard for me to ask help from my friends even though I cannot return the favor. I am sure I am being talked about.

It would be better if almost all the laws were thrown away. A person shouldn’t be punished for breaking a law that he thinks is unreasonable.

These responses are interpreted to reveal greater cynicism, mistrust, conflict with authority, and “externalization of blame for one’s problems” (Dahlstrom, Lachar, and Dahlstrom 1986). Race differences in MMPI scores diminish when social status, IQ and level of education are fixed, but once again this does not show MMPI differences to be status artifacts. Traits that affect scores may also affect status, as for instance friction with authority impedes advancement in hierarchies.

1997 was a long time ago. What does a meta-analysis of this MMPI evidence look like? Richard Lynn and Edward Dutton provide an up to date summary of such MMPI evidence in their 2019 book. I quote: 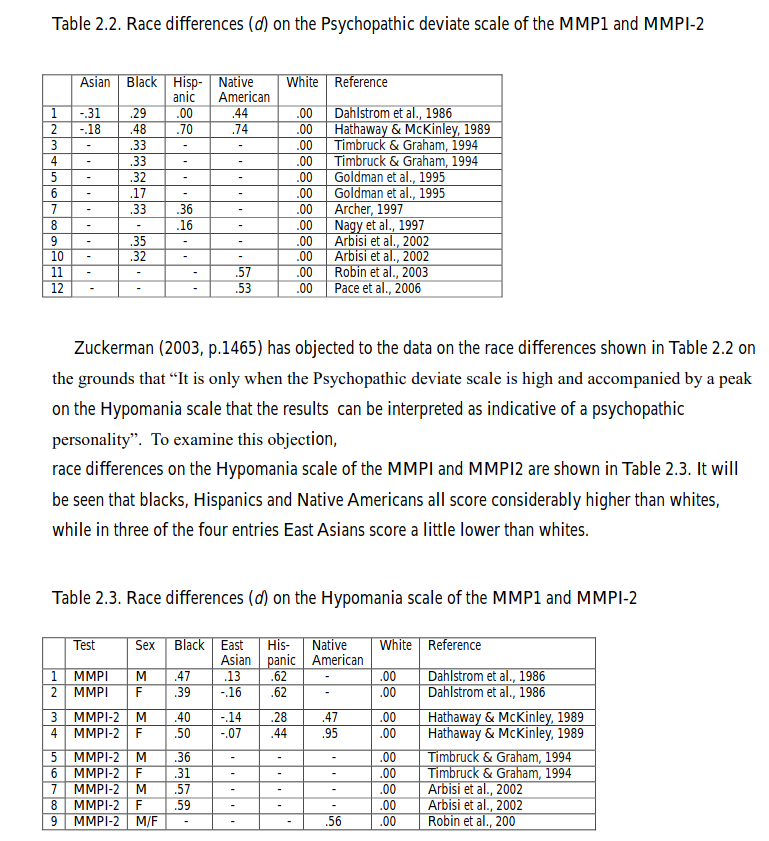