As every reader knows, whenever powers that be come up with a new euphemism for something, this works, and the previous meanings and associations are quickly forgotten. That’s why we… oh right:

Linguists are familiar with the phenomenon, which may be called the euphemism treadmill. People invent new words for emotionally charged referents, but soon the euphemism becomes tainted by association, and a new word must be found, which soon acquires its own connotations, and so on. Water closet becomes toilet (originally a term for any kind of body care, as in toilet kit and toilet water), which becomes bathroom, which becomes restroom, which becomes lavatory. Undertaker changes to mortician, which changes to funeral director. Garbage collection turns into sanitation, which turns into environmental services. Gym (from gymnasium, originally “high school”) becomes physical education, which becomes (at Berkeley) human biodynamics. Even the word minority—the most neutral label conceivable, referring only to relative numbers—was banned in 2001 by the San Diego City Council (and nearly banned by the Boston City Council) because it was deemed disparaging to non-whites. “No matter how you slice it, minority means less than,” said a semantically challenged official at Boston College, where the preferred term is AHANA (an acronym for African-American, Hispanic, Asian, and Native American).38 The euphemism treadmill shows that concepts, not words, are primary in people’s minds. Give a concept a new name, and the name becomes colored by the concept; the concept does not become freshened by the name, at least not for long. Names for minorities will continue to change as long as people have negative attitudes toward them. We will know that we have achieved mutual respect when the names stay put. [The Blank Slate, Steven Pinker]

“What happened to moron, idiot, imbecile, feebleminded, and retarded?” An actual 2010 paper title by Douglas Detterman in Intelligence

So, we got a new player in this whack a mole game, it’s the … polygenic index (PGI) intended to replace several already existing terms polygenic risk score (PRS) which is too medicaly in meaning, and polygenic score (PGS), I don’t know what’s wrong with that one.

Never heard of Martha Minow, can’t find anything about this proposal. Anyway, so let’s just interpret it as authors trying to signal their sympathy for the usual intolerant people by adopting some new term. Speaking of that, which term is currently winning? Google NGRAM can give us an idea up to 2019: 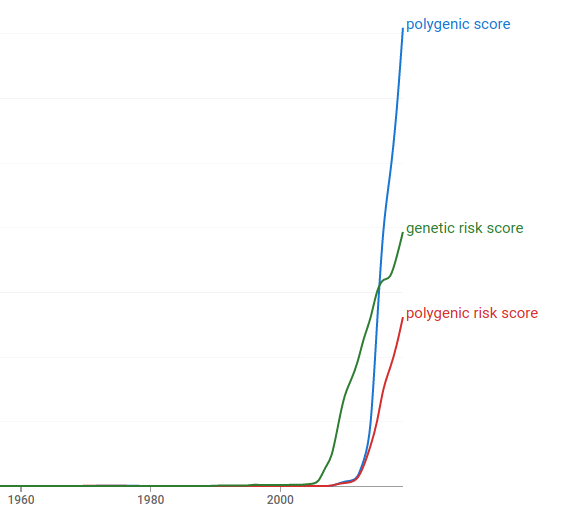 So my favorite is winning in 2019. If you look closely, Google tells us that both GRS and PRS were used in 1970 and forward, but extremely rarely so. This Royal Society print mentions PGS in 1975 for livestock.

That aside, authors set up some organization (“Polygenic Index Repository”) using their new euphemism, so I am sure it will gain some traction. Google Scholar already finds 88 hits for PGI compared to 12.1k for PRS, and 4.270 for PGS.

PS: hopefully no one tells them about epigenetic scores just yet