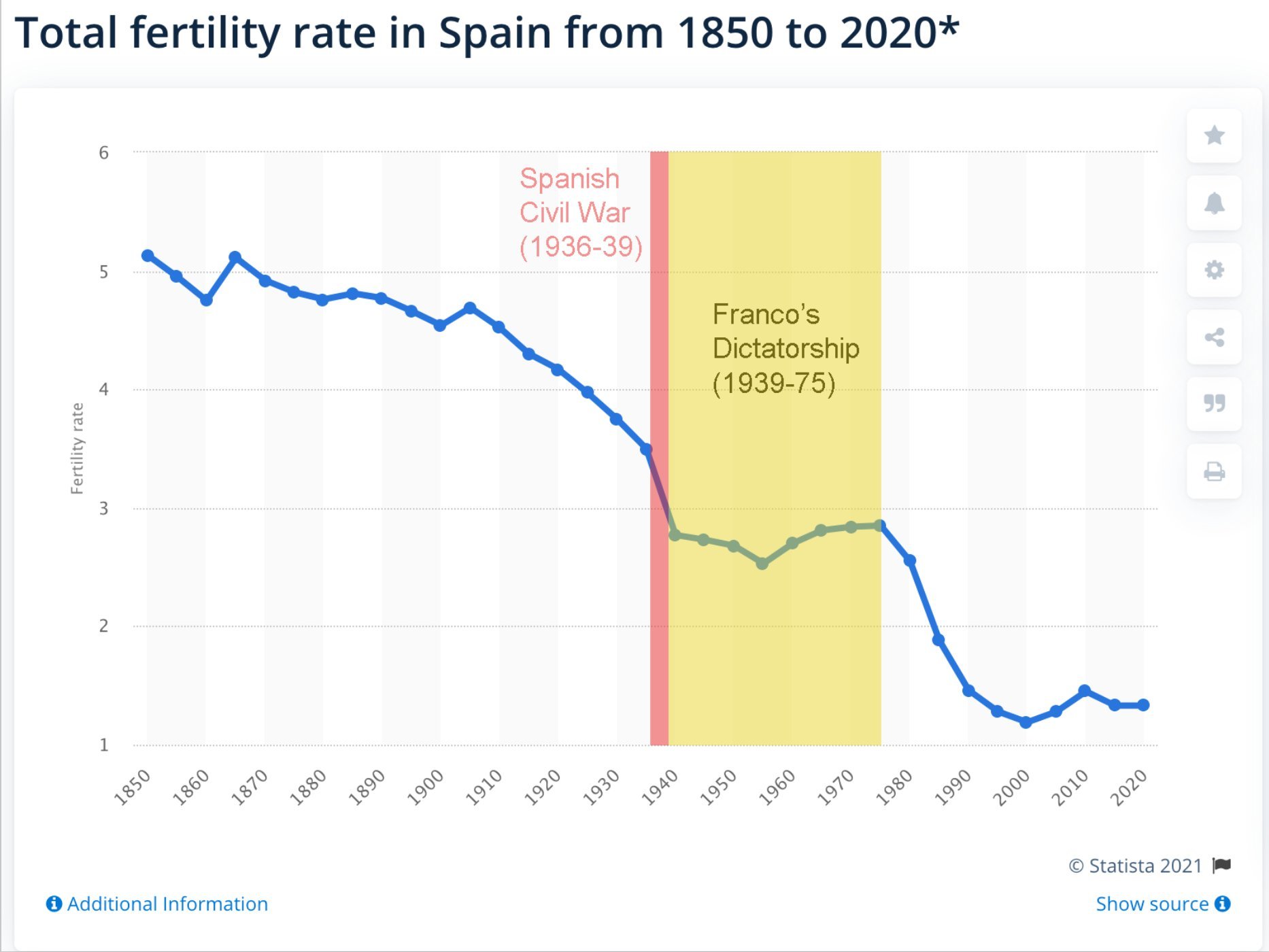 Last year, this meme was floating around: 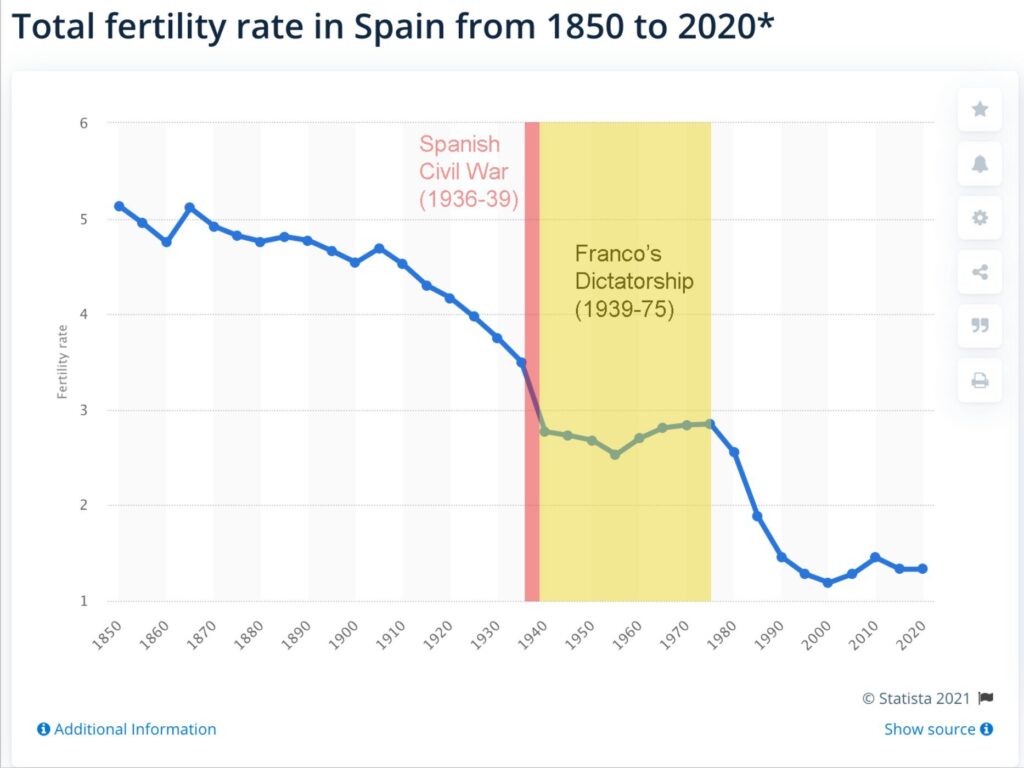 The data are real enough, and the years are right. It seems that Franco was able to sustain fertility in Spain during his regime. Is he the only one? Well, his neighbor, Portugal, also had a dictator of sorts, Salazar, who was in power 1932-1968. How does their plot look like? 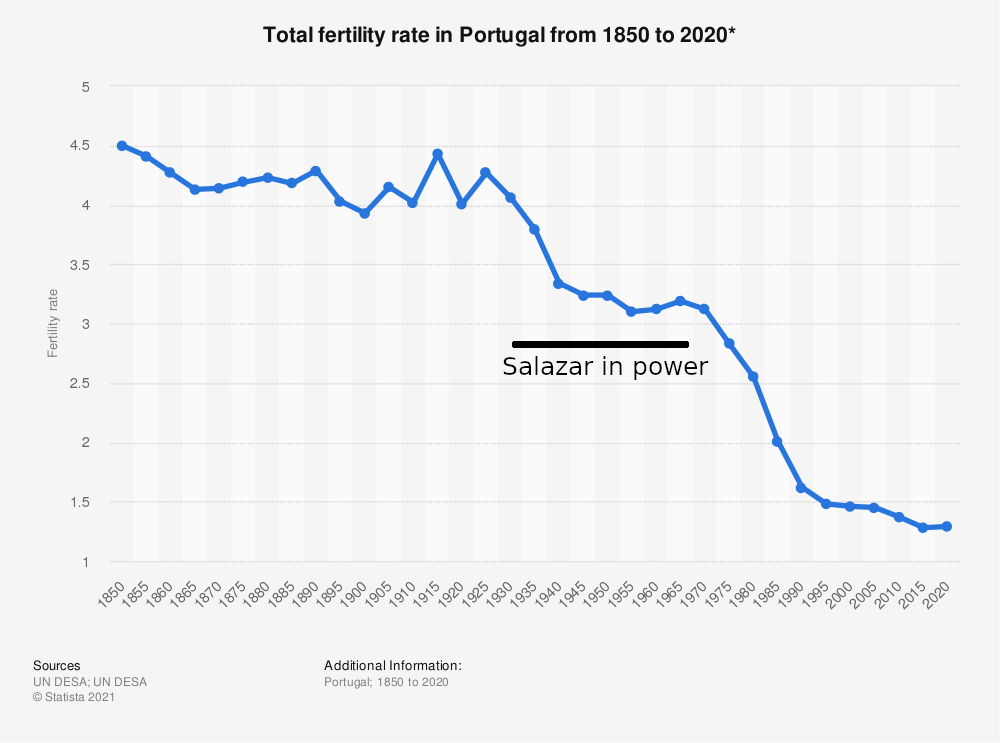 There was a big initial drop, but then it stabilized and then began declining shortly after his reign was over. Hmm. What about Hitler and Mussolini?? 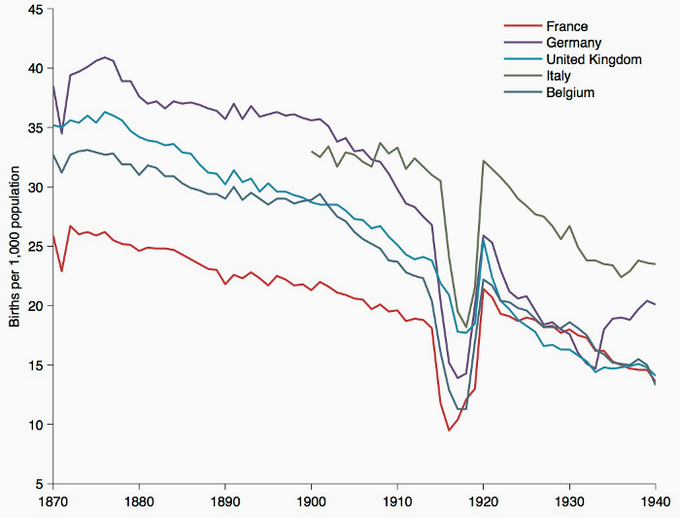 Hitler was in power 1933-1945, and Mussolini 1922-1943 (partially until 1945). Everyone had a big boom past world war 1, then there was a big spike for Germany starting in… 1933. Italy does not look very convincing though. Mussolini even had a policy for this (Battle for births) seemingly equally effective as the Italian World War 2 military.

Speaking of Germany, is this fertility boost feature of right-wing dictators or does communism also work? Let’s look at that country that get divided:

This is from a study called The Fall of the East German Birth Rate After Unification from 1995 (there is somehow another paper with the same topic from the same year by different authors). Anyway, it looks like going into the 1960s, the rates were about the same, but in mid 70s they diverged with East Higher. Then boom, comes 1990 and freeeedom, and fertility takes a massive crash but only in the East.

Next question then: is this a standard thing after the end of the Soviet East Block? Yes, say many studies, like this one: The Post-Communist Fertility Puzzle (2010):

Fertility has unanimously declined across the entire post-communist region. This study explores the variation in fertility trends over time among these countries and assesses to what degree three explanations are applicable: second demographic transition (SDT), postponement transition (PPT) or reaction to the economic crisis. Moreover, on the basis of SDT and PPT theoretical tenets, as well as descriptive evidence, the economic context is hypothesized to be linked to two processes of fertility decline conversely. The results show that no one theoretical explanation is sufficient to explain the complex fertility declines across the entire post-communist region from 1990 to 2003. In some countries, a great part of the decline in fertility occurred before significant postponement of childbearing began, which indicates that the dramatic decline was due to stopping behavior or postponement of higher order births. Postponement of first births, either through PPT or SDT processes, greatly contributed to fertility decline in a small number of countries. Pooled cross-sectional time-series analyses of age-specific birthrates confirm that these two distinct processes are present and show that the economic crisis explanation has explanatory power for declining birth rates. In contrast, logistic regressions show that the likelihood of postponing childbirth increases with improved economic conditions. These results confirm the importance of taking the economic context into account when discussing explanations for fertility decline. More specifically, the results indicate that the severity and duration of economic crisis, or absence thereof, influenced the extent and manner in which fertility declined.

What about the motherland, Russia? 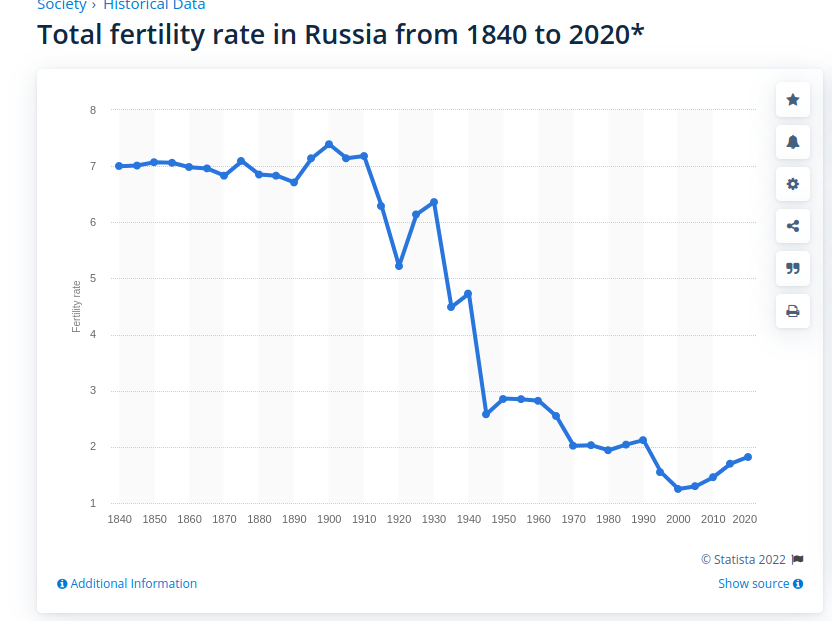 OK, so communism begins in 1917 and ends in 1990ish. 1990 sees a big drop just like in East Germany and so on. There is even an up-going trend afterwards as Russia turned back to nationalist conservatism under Putin. Kinda fits, except for the big glaring drop in the first communism period. Also that Tsarist Russia was actually also authoritarian, and their fertility was basically constant until communism took over. So uh, weird country for this question.

What about non-Europeans, say, Chile under Pinochét? 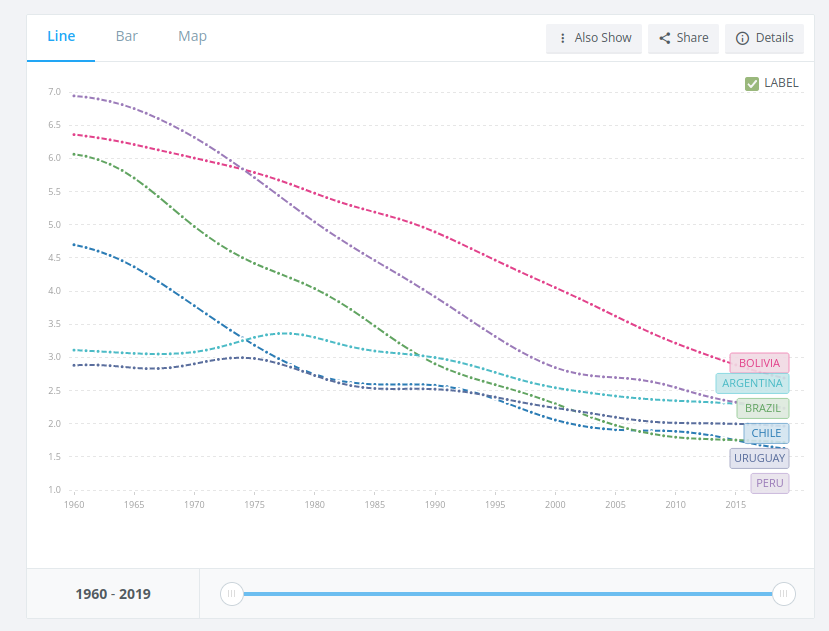 Guess where his reign was? It’s 1973-1998. Do you see anything but a big decline? Nope, me neither. My friend told me Pinochét was a liberal dictator (a what?), so I guess he doesn’t count here. There’s also a old China, which had an anti-fertility policy…

By now you are asking: dude, why has no one just done a proper fixed effects study using some longitudinal dataset of authoritarianism (e.g. Polity) and fertility rates? Well, there is kinda sorta such a study, but… it’s reversed: Women, Demography, and Politics: How Lower Fertility Rates Lead to Democracy (2018):

Where connections between demography and politics are examined in the literature, it is largely in the context of the effects of male aspects of demography on phenomena such as political violence. This project aims to place the study of demographic variables’ influence on politics, particularly on democracy, squarely within the scope of political and social sciences, and to focus on the effects of woman-related demographics—namely, fertility rate. I test the hypothesis that demographic variables—female-related predictors, in particular—have an independent effect on political structure. Comparing countries over time, this study finds a growth in democracy when fertility rates decline. In the theoretical framework developed, it is family structure as well as the economic and political status of women that account for this change at the macro and micro levels. Findings based on data for more than 140 countries over three decades are robust when controlling not only for alternative effects but also for reverse causality and data limitations.

To be fair, as far as I can tell, this guy did the stats wrong, didn’t test for reverse causality properly, and didn’t use fixed effects when this was an obvious choice. Anyway, good effort. Dataset can hopefully be reanalyzed by someone else (exercise left to the reader).

OK, what about individual data? Are people who are against freedom more into having more kids? Yes says Gerhard Meisenberg who presented results from a so far unpublished study on non-cognitive fertility correlates in a large representative US dataset: Non-cognitive correlates of fertility in the United States (London conference on Intelligence, 2021; no I don’t have a copy of the slides):

It is well established that lifetime fertility is negatively related to education and intelligence in most modern societies. Far less is known about relationships of fertility with non-cognitive traits such as personality and socio-political attitudes, except for reports of generally positive correlations with conservatism and religiosity in Western countries. The present study uses data from the General Social Survey (GSS) in the United States to define those attitude dimensions that are most closely related to lifetime fertility. The results show that non-cognitive traits are as important or nearly as important as IQ for fertility outcomes of both males and females. Of a number of attitude dimensions, the one labeled “Morality” is most strongly related to fertility outcomes, more so than self-reported conservatism or religiousness. This dimension is defined by objections to abortion, homo sex, pre- and extramarital sex, suicide, and euthanasia. Also support for censorship (now called deplatforming) and support for prohibiting various things is associated with higher fertility. Other elements of the liberal-conservative spectrum, including “tough on crime” and opposition to the welfare state, have negligible relationships with fertility. We can conclude that differential fertility by moralistic attitudes and associated intolerance was substantial in the 20th century United States. This is predicted to influence population traits through environmental and genetic mechanisms. Genetic selection for a moralistic mindset in a country that has already a history of puritanism and recurrent moral panics opens up new perspectives on current social trends in the United States.

OK, so individual level data definitely point in the direction that authoritarianism is being selected for, and historical data are suggestive that authoritarian regimes, mainly conservative ones, sometimes overcome declines or even boost fertility when everybody else is failing at this or not even trying.

This brings us of course to forecasting. What good is a science that can’t predict anything? (Answer: 💩 or 🤡). So will the current authoritarian (or heading that direction) regimes who are trying to improve fertility, succeed in this? Most people are talking about Hungary’s attempt recently, but China is also trying (see my prior post on that Danish ad campaign by private company). Will they succeed? Metaculus has questions on this:

Maybe there is something in human nature about fertility and authoritarianism. If I had to speculate, I would say this relates to group unity and joint mission. If your group has a strong ethos of conquering the world, and working hard at this, following well-known and understandable rules, then it makes sense that families would contribute theirs. Of course, you would have some strong people in power constantly promoting pro-fertility things. When Western countries do this kind of thing, even mildly, Guardian journalists immediately have a meltdown. It seems no democratic countries has any done anything serious about fertility issues, until you count the increases in fertility since the 1980s low as their doing (which it might be!). Still, their success is limited as it was an improvement from say 1.30ish to 1.80ish, not above the barrier of 2.0. 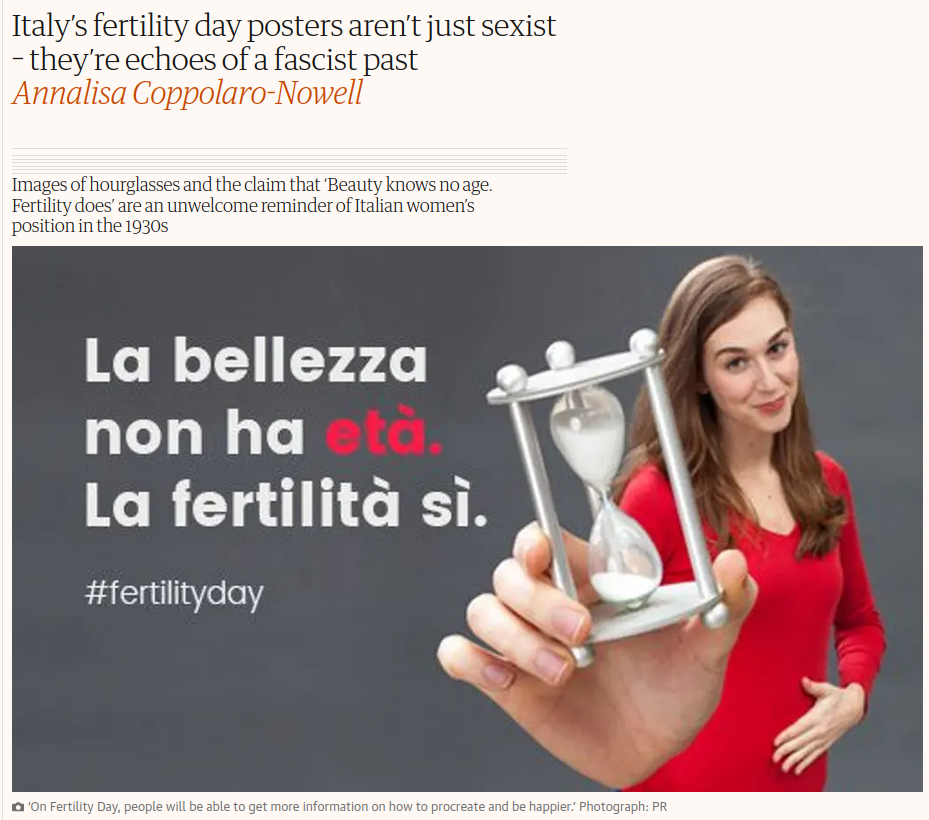 Art Jensen’s 1969 article: How Much Can We Boost IQ and Scholastic Achievement?