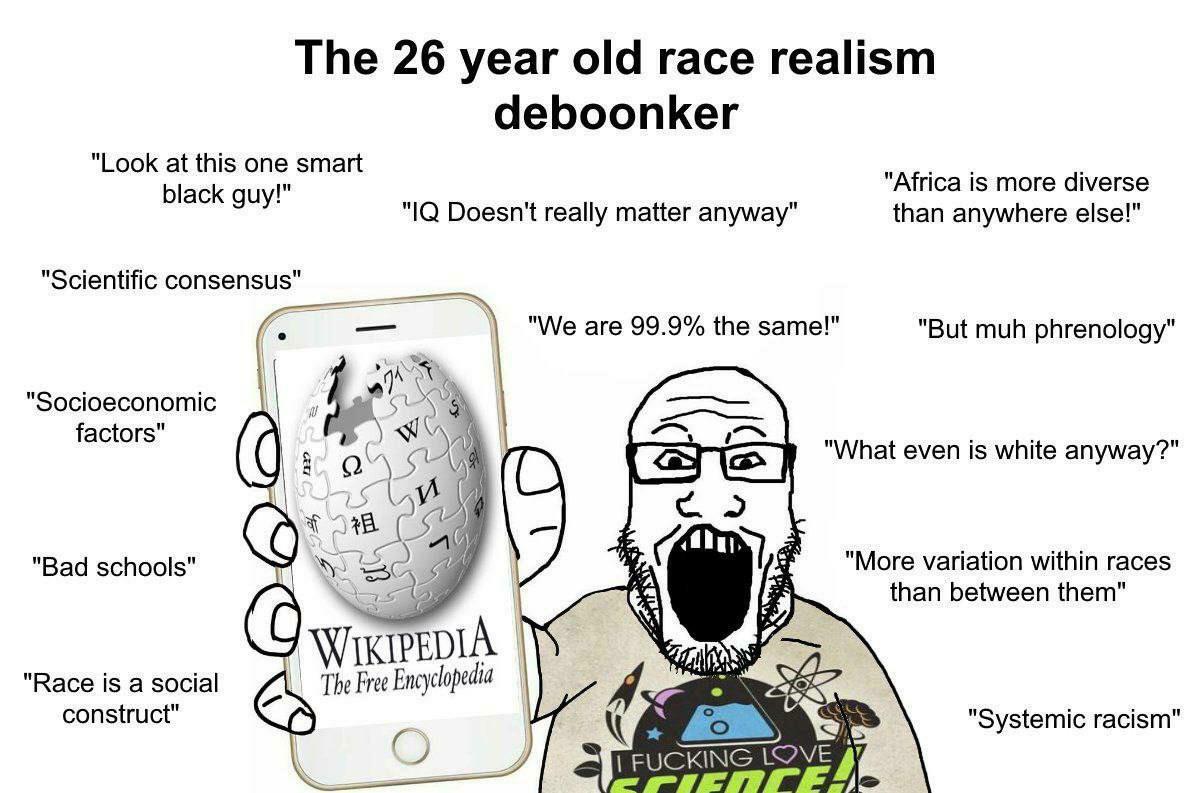 A few days ago I posted this deboonker meme on Twitter: 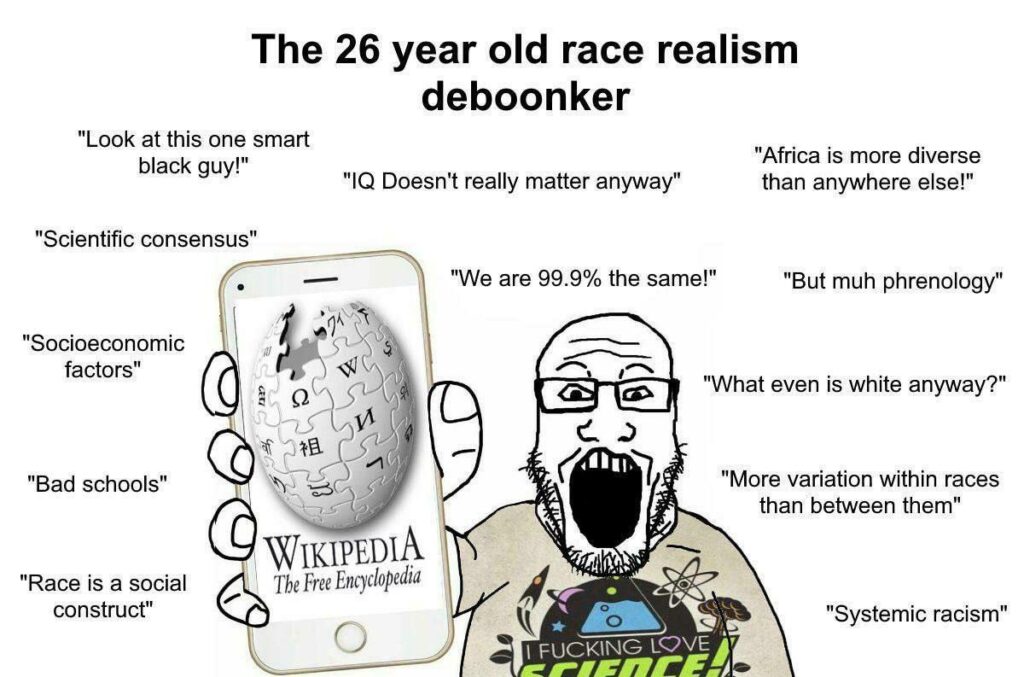 I guess it got reposted somewhere by some woke people, since my feed has been filled with dumb replies for days. These go like this: 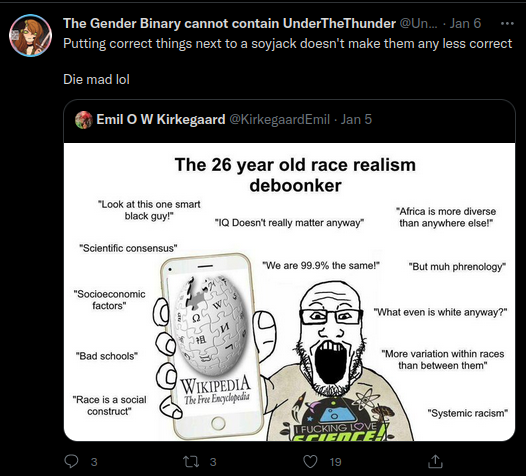 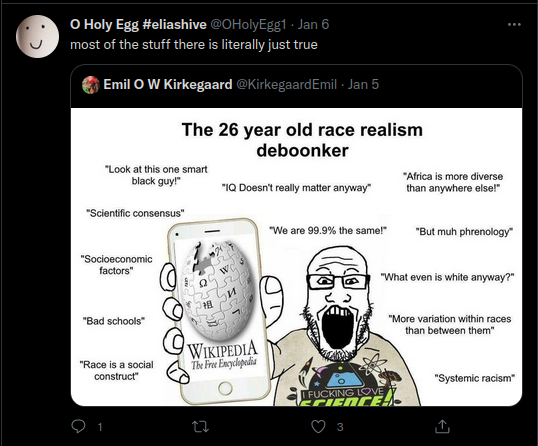 I didn’t make the meme, so I can’t speak for certain for whoever did this. However, I can take some guesses.

One very confusing aspect to the wokes is that some of the statements on the meme are actually true. The point of having these is to laugh at their red herring status. It is true that humans are 99.9% the same genetically in terms of base pair identity. (if you also include variation in copy number variants, the value will be lower) This is of course because most genotypes don’t vary at all, so we are all the same. By this metric, one can also find that we are 97-99% the same as chimpanzees depending on how you count things. Maybe 20% with bananas, but it’s questionable to compute these. But what does this matter for race realism? Nothing. No arguments are even given about how some genetic identity level relates to the plausibility of race differences in some trait. As we know with some well known cases, even minor genetic differences can have huge impacts. Consider alcohol intolerance, lactose intolerance, the Y chromosome’s SRY gene (that makes you into a man basically but is only 827 base pairs long), altitude adaptations in Tibetans, Andeans, and Ethiopians, unusually large spleens, skin color and its associations with skin cancer and vitamin D levels, the 1000s of genetic disorders that often involve minor changes (sometimes a single letter) but that is the difference between life and death. Clearly, some relatively small genetic differences matter a lot, and we already know they vary by population. So saying that humans are 99.9% identical is not really saying anything relevant.

More variation within races than between them

Again, a true statement, promoted by communist activist Richard Lewontin. Now well known as Lewontin’s fallacy. I don’t need to cover it in depth here as this was done in a prior post, but the TL;DR is that no one has ever substantiated the hidden premise that racial variation must exceed 50% to be relevant or significant. Lewontin just made it up, somehow it gets repeated ad nauseam.

Surely some schools are worse than others. But we have known since 1960s Coleman report that this doesn’t matter as much as some people think, maybe doesn’t matter at all for adult intelligence gaps.

Many wokes believe there are scientific consensuses for their various beliefs. Actual survey data shows that is not the case in general when it comes to race differences, or even race terminology. Of course, sometimes scientific consensus is wrong, there’s a nice summary of such cases over at AltHyp.

These of course differ, another true statement, but it would be begging the question to assume that one has to control for these. Per the hereditarian model, social status gaps are caused by genetic gaps in intelligence, so controlling for these social status gaps is a sociologist’s fallacy.

Look at this one smart black guy

A surprisingly common retort is to point to some smart African guy (or a good female scientist) as if this somehow disproved a mean difference in intelligence (or scientific ability). So again, a true statement, but of no relevance since no one claims the range of African intelligence is very limited. As per the normal distribution model, the ranges are actually infinite for all groups. 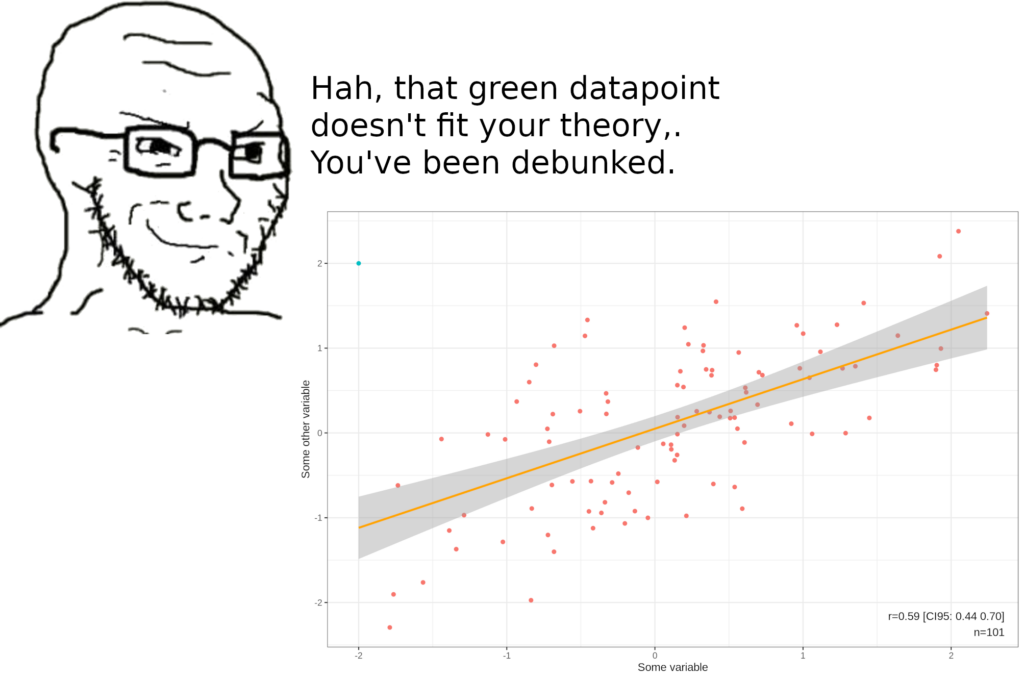 Africa is more diverse than anywhere else

"The allegory of the trolley problem paradox"