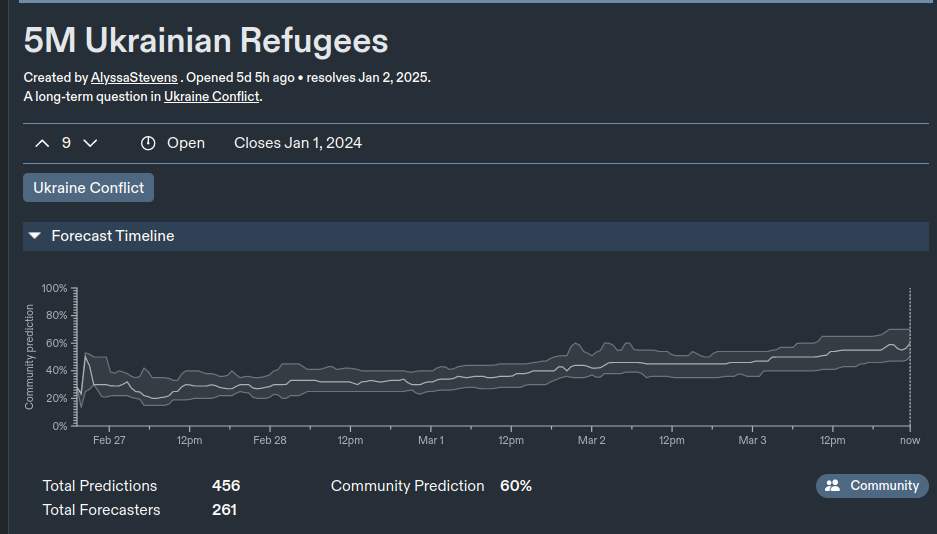 As the war rages on, the war refugees are starting to come and more are announced. They are being widely accepted even by the nationalist parties. For instance, Danish New Right (national conservatives) party leader Pernille Vermund (sporting a Ukraine flag on her profile) writes that Ukrainians should be welcome immediately, and in fact, skip the asylum system entirely, so they can get to work:

Whatever the reasons for this change in policy wrt. Ukrainians compared to the big wave of African/Muslims who want to come and live in even poorer and more conflict-prone areas, we should also ask ourselves what are we going to get. There are two ways we can try to predict this:

Let’s start with the first. Here’s a map of human development index in Europe: Ukraine is the 3rd worst country in Europe overall (42 out of 44). By world standards, Ukraine is slightly above average, at rank 74 out of 189 countries. It’s a solid 2nd world country. By European standards, however, it is bad. Human capital theory of country development is the model that most variation in countries’ level of development is due to variation in their human capital, especially average intelligence levels. How is Ukraine doing on that front? Here’s a map from David Becker’s work-in-progress (v1.3.3) re-analysis of the Richard Lynn database:

Ukraine is in the yellow region, along with the rest of southeast Europe. The best estimate for it is 90 IQ. By comparison, Lynn 2012 estimated it at 94 and Heiner Rindermann also 94. So it’s likely to be in the 90-100 interval. This is pretty good by world standards (the world mean is about 82). Is Ukraine performing as one would expect by its measured intelligence level? 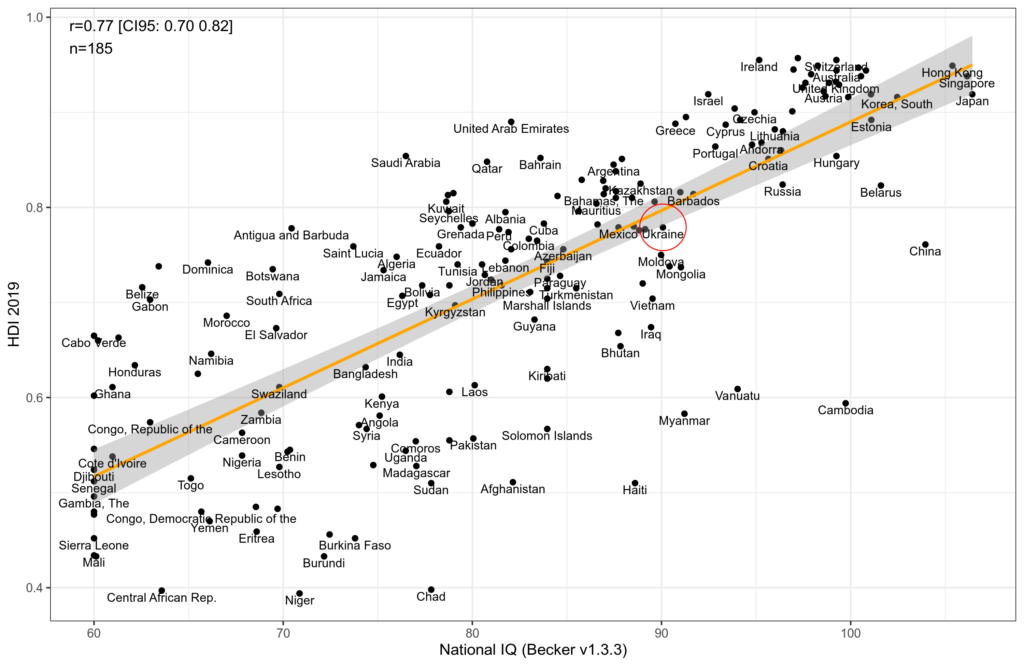 (No weights used, but it would be roughly the same with weights for countries, China will drag the correlation a bit down due to massive population size and its strong underperformance.)

As a matter of fact, Ukraine is basically on top of the regression line, thus neither over- or underperforming. If we used Lynn’s or Rindermann’s IQs, Ukraine would be slightly underperforming. But still, it is not so far from the regression line. We therefore don’t have any reasons to think something special is going on. From this perspective, we don’t expect stellar performance from the average Ukrainian, we expect something better than a typical Muslim immigrant, and less than a typical NW European immigrant.

As a bonus, we can also look at Ukrainians in e-sports. Maybe you are looking to win the next DOTA2/LOL/whatever tournament, and wondering if you should gamble on getting a superstar from Ukraine. In my study, we see that Ukraine is doing somewhat better than expected by their IQ: 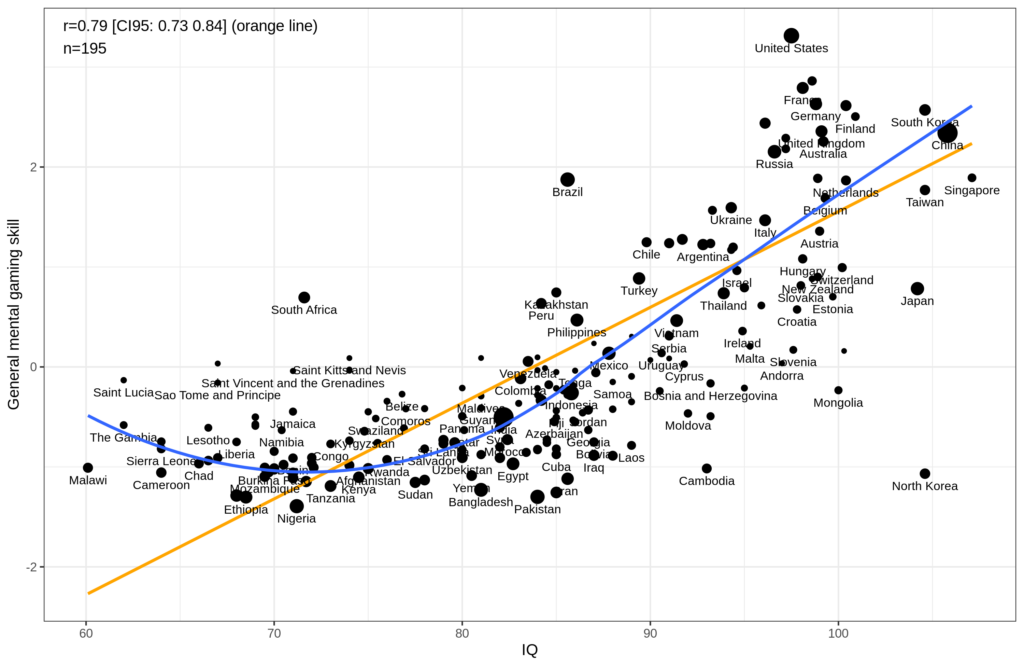 Ukrainians not in Ukraine

So what do actual results show for Ukrainian immigrants? As a matter of fact, Ukrainians were covered in multiple of my own studies, as helpfully compiled by Twitter user Mandelbrot.

Ukrainians seem to be doing alright. Their mean GPA is 6.81 which is somewhat below the Danish standard of 7.22, but better than say Turkey at 5.23. More importantly, we can look at the immigrant selection into Denmark, to see how this relates to this performance:

This is calculated by looking at the education level of people migrating from countries to Denmark, compared to the education level of those countries at home. It’s just the standardized residual of that regression. Ukraine has a score of -0.30, so they have been sending slightly less selected immigrants by world standards to Denmark. This doesn’t imply they are below average compared to home, just that they are relatively less positively selected compared to other countries sending to Denmark in that time period.

Moving on from just school performance, in 2014, we studied immigrant outcomes across many metrics in Denmark for 70 origin countries, and computed an overall index (S factor) based on educational level, income, crime, and unemployment. On this scale, Ukraine attained a z score of 0.72, so their performance was above average for the studied countries. It was in fact about the same as Russians and Greeks. In a follow up paper, we did the same kind of study for Norway based on a sample of 67 origin countries. Ukraine attained a z score of 0.34, again somewhat above average, but below natives. Note that a score of 0 here is not the native level performance, it is the average immigrant origin performance, which in this case means a country like Bulgaria (0.17). The score for Danes in Norway was 1.00, and Norwegians in Denmark was 0.84, so these values represent a good value to attain. Based on such social statistics, one can also compute the net economic effect per person, which has been done for Denmark as well: 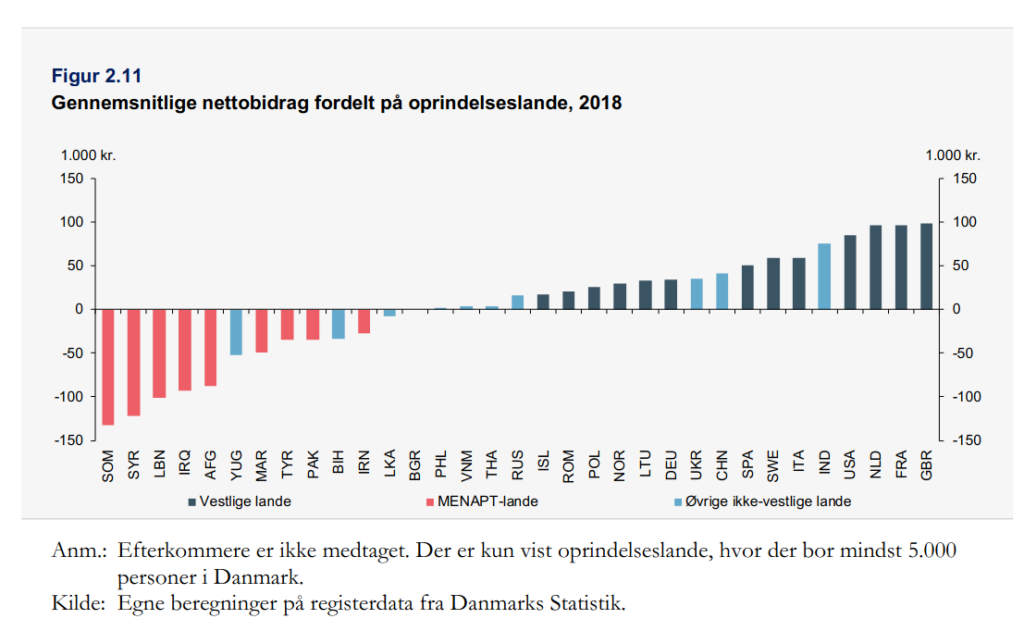 For more details on this, see the prior post: Immigration economics for economist dummies.

We see that Ukraine is again doing fairly well. In fact, this plot is NOT age adjusted, so these values are a snapshot of current immigrants contribution in taxes vs. spending. Since Ukrainians in Denmark are pretty young, often functioning as foreign laborer, their contribution will be inflated relative to their long term impacts, but we can’t say exactly how much.

We also have data for crime rates in Germany in the period 2012-2015 for 81 origin countries. Ukraine isn’t shown on the figures in the paper, but I downloaded the data, and redid the plot so we can see it: 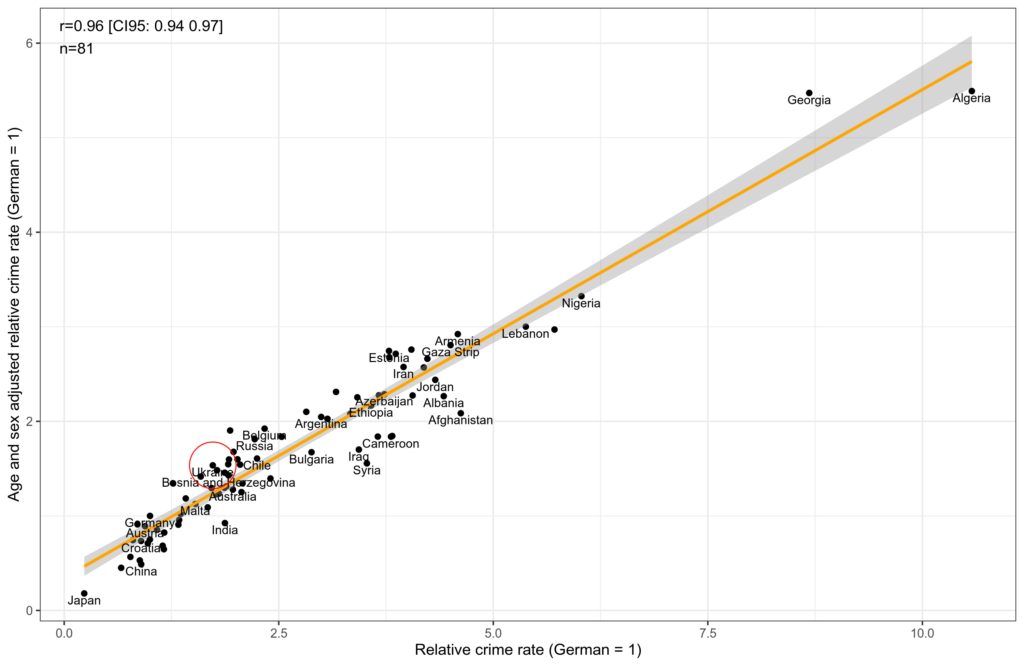 The plot may seem uninformative, but it’s actually informative. The X axis shows the crime rate relative to German natives, and Y the age and sex adjusted one. Ukrainians in Germany are mostly young men who come for work, so one would expect them to be a little inflated for crime as young men are the most criminal group. Despite this, Ukrainians are actually somewhat below average for crime rate in Germany, with or without adjustment. They probably don’t want to lose their work permits, so reasonably enough stay on the right side of the law.

Finally, there is data on median household income in USA for 107 ethnic groups. This is maybe suspicious as it may be substantial Jewish Ukrainians instead of regular Ukrainians, but still, Ukrainians are doing well! They are at 81,603 USD, which places them in top 25 of 107, above Scandinavians. US median income data though in general shows extreme selection effects, e.g. Indonesians are doing extremely well at rank 7, South Africans at rank 5, Macedonians at rank 9 and so on. I would therefore not put much stock in the American data due to extreme unrepresentativeness.

According to BBC, so far about 915k Ukrainians have left, most going to Poland (506k). But many are forecasting millions of them. Metaculus is at 60% for at least 5 million Ukrainians, which is quite substantial, over 10% of the population (41M).

My review of the existing data on Ukrainians paints a fairly consistent picture:

From an economic perspective and with the goal of achieving a net benefit to a northwestern country, one could admit Ukrainians on a temporary basis (for reals this time, though probably not). As long as they only work, and don’t have children in NW countries, they will be economically beneficial. One can furthermore admit a talented proportion of them for an economic benefit to the host countries in the short and long run, but this is at the price of taking the high skill labor that Ukraine needs to develop, and to win the war. You decide the ethics of such a move. The main bulk should probably stay close to home, where they can set up factories, and help out the war effort at work by sending supplies back, or going back for medical reasons.

The main worry with the above conclusions is that refugees are not as selected as prior immigrants from Ukraine. In fact, refugees are generally a huge economic loss according to the Danish data. The next batch will therefore likely perform worse than the prior batch, especially initially. This more negative selection might reduce the performance level to that typical of immigrants Denmark received from the Yugoslavia wars (which we reviewed previously).