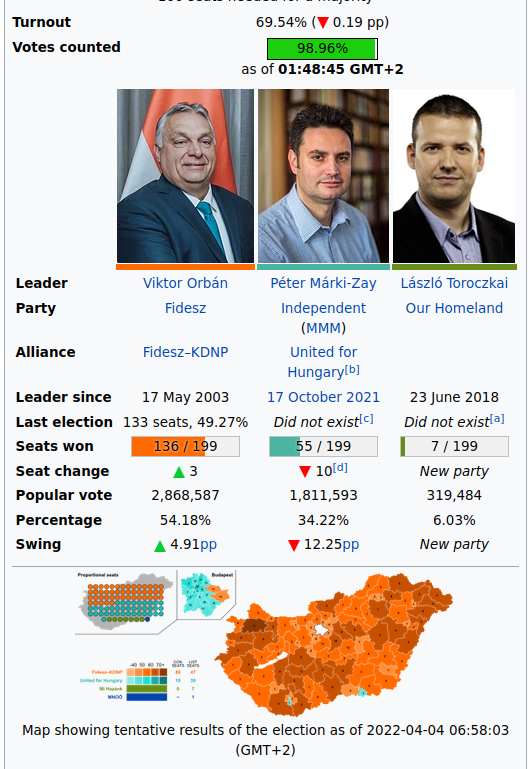 Hungarian president Viktor Orbán is not popular with western media and academics. This is obvious as he is a national conservative, and that’s the least favorite group according to journalist voting data across western countries: 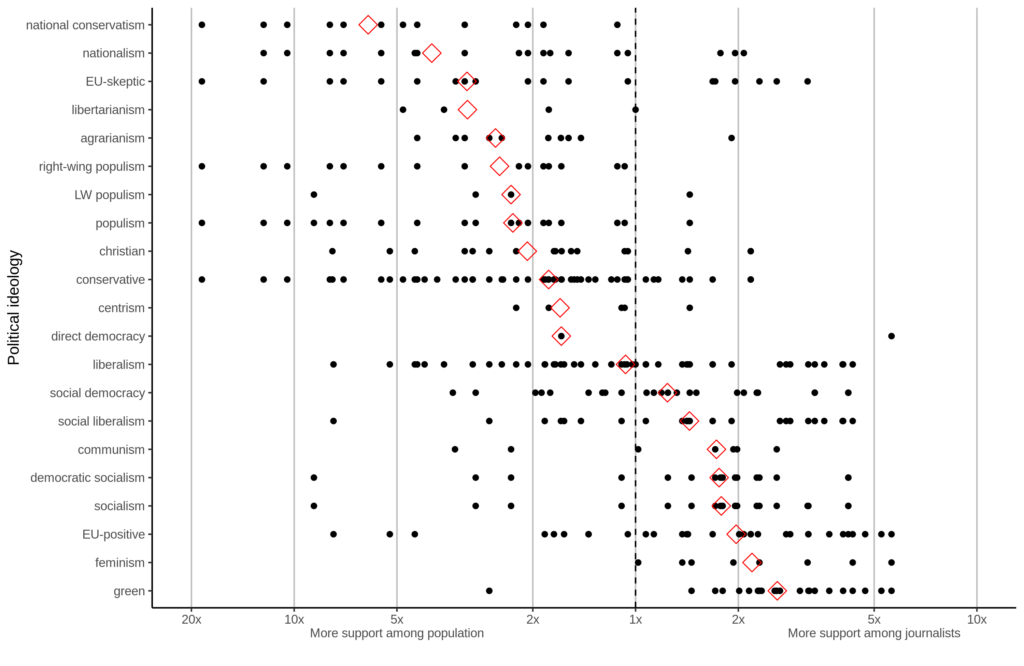 Still, the critics might be right. Their primary complaint is that Orbán’s has been tinkering with the democratic process in order to favor his own party. Since there just was an election, we can look at this quantitatively. Here’s how the votes and seats allocation looks like, per Wikipedia:

Now, compare the popular vote to the seat allocation:

(Shout out to whoever came up with the joke party names. Woof woof, very normal!)

Here we compare the votes the parties got, and their proportion of the seats, i.e., power, received. We see there are large discrepancies, what CGPGrey calls representation error. I’ve computed them in the last column, and we see that Orbán’s party gets a whopping 14.2% boost from the process to their power. So despite winning only barely in the popular vote (54%) he gets just more than a 2/3 majority, meaning he can do whatever he wants basically, including changing the constitution.

This sounds very bad! Can we compare to some other bad democracies for comparison? Of course, let’s use… United Kingdom! They had an election in 2019, and it looks like this: 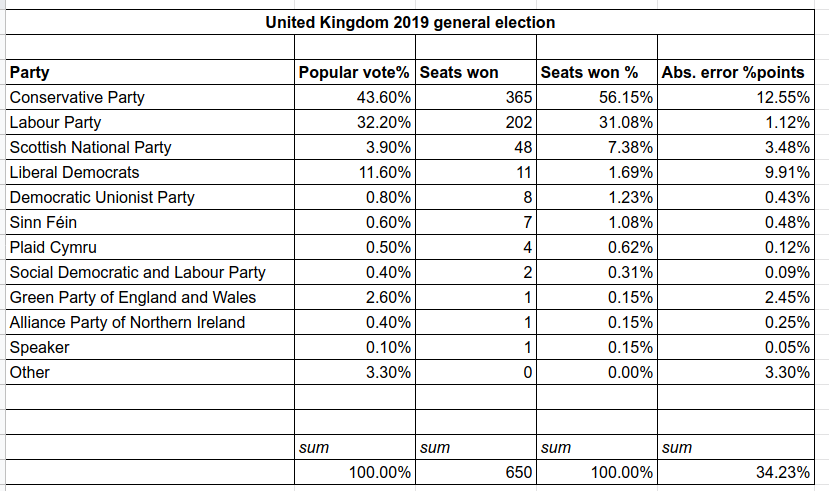 Huh, so the United Kingdom is even badder! We see that in the UK, the Conservatives also received some extra 12.55% power, while the Labor (Social Democrats) lost some 1.12% power. It’s those damn conservatives right?

Well, maybe, but this stuff is really very predictable, and just depends on who is the largest party at the time of the election. We can see this by going back to the 2005 UK election, which looked like this:

This is all a well known effect of the out-dated first past the post voting system. It is explained in this neat video:

It doesn’t have to be like this. One can use pretty much any other modern system, and this would give results something like the 2019 Danish election: 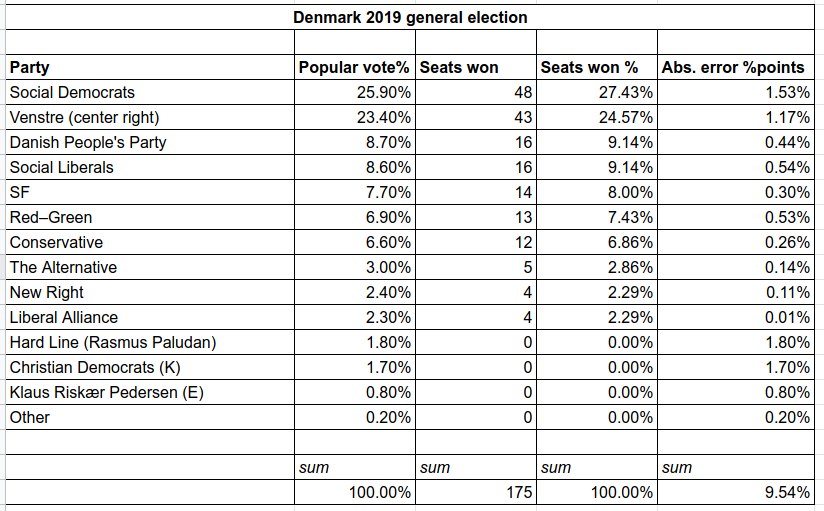 OK, this isn’t perfect either, but it’s below 10%. Rasmus Paludan got cheated out of about 3 seats for his party due to the 2% voter threshold. The electoral threshold is a favorite tool of large parties to suppress dissent and prevent new parties from forming. This is used all over the world, except for the Netherlands. Their parliament has 150 seats, so if you get 1/150 of the vote, you get that one seat. Perfect! The world map looks like this: 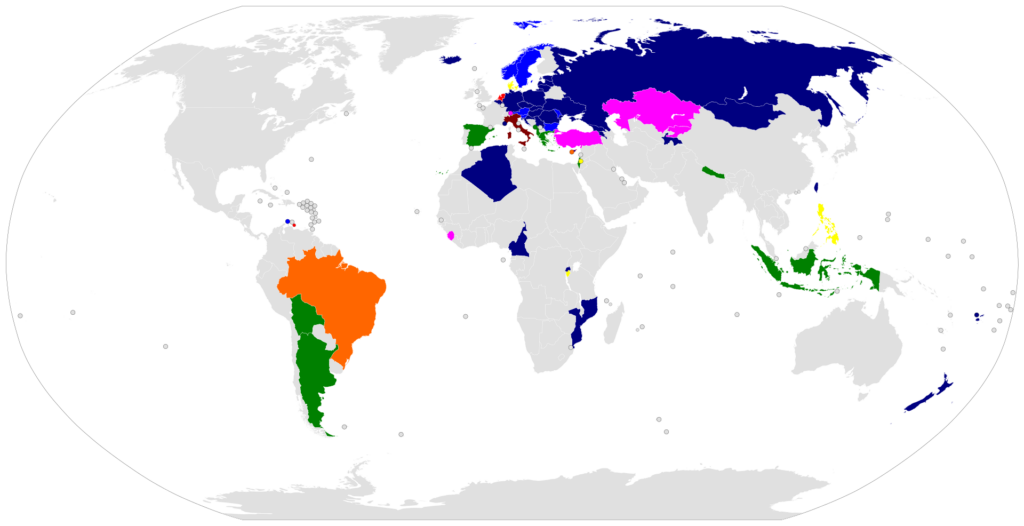 Hungary’s electoral threshold is 5%, which is the median for western countries. (This unfortunately prevented the dog and normal people from getting any seats.) On this front, Orbán is not that bad again. He made changes that favor large parties, which happens to benefit his own party, but might soon favor someone else’s party. As we saw from the United Kingdom’s results, this does not necessarily favor a right-wing party, as Labor was the largest benefactor in the examples I looked at. To complete the approach, one would collect these data across all democracies, so one could place Hungary on a relative scale of badness of democracy. I didn’t find any source that has done this, and I didn’t want to repeat this copy-paste-computation in Excel another 100 times. My guess is that the Hungarian democracy is pretty middle tier, which is what one would expect from a country that is otherwise middle tier with regards to democracies. 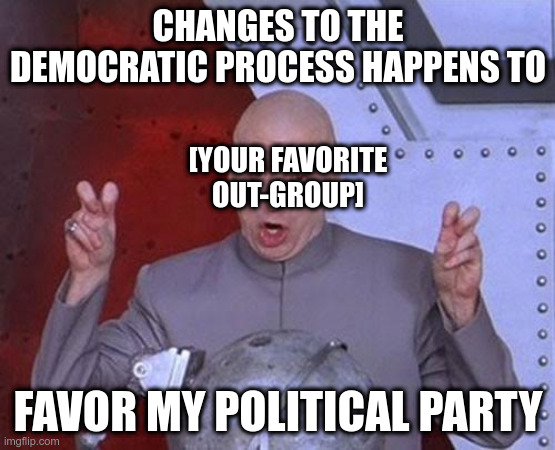 New study out: Will Intelligent Latter-day Saints and Smart Conservatives Inherit the Earth?