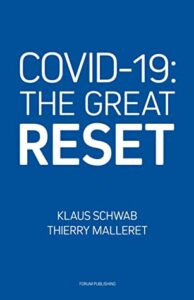 Sometimes I take the time to read a ‘normal’ book. This was one of them, prompted by some friends who wanted my opinion. The best thing I can say about this book is that it is short. It’s rather boring. It consists mostly of vague predictions, mostly hedged in the extreme, about the future. It’s vague socialist, while generally avoiding anything specific. It mentions many topics, in fact, it’s essentially a list of all the things COVID-19 may affect. I can’t recommend this book except to die hard Corona fans, or to people who care particularly about politics.

In the post-pandemic era, according to current projections, the new economic “normal” may be characterized by much lower growth than in past decades. As the recovery begins, quarter-to-quarter GDP growth may look impressive (because it will start from a very low basis), but it may take years before the overall size of most nations’ economy returns to their pre-pandemic level. This is also due to the fact that the severity of the economic shock inflicted by the coronavirus will conflate with a long-term trend: declining populations in many countries and ageing (demographics is “destiny” and a crucial driver of GDP growth). Under such conditions, when lower economic growth seems almost certain, many people may wonder whether “obsessing” about growth is even useful, concluding that it doesn’t make sense to chase a target of ever-higher GDP growth.

This expansion of fiscal capabilities has dramatically different implications depending on whether the country concerned is advanced or emerging. High-income countries have more fiscal space because a higher level of debt should prove sustainable and entail a viable level of welfare cost for future generations, for two reasons: 1) the commitment from central banks to purchase whatever amount of bonds it takes to maintain low interest rates; and 2) the confidence that interest rates are likely to remain low in the foreseeable future because uncertainty will continue hampering private investment and will justify high levels of precautionary savings. In contrast, the situation couldn’t be starker in emerging and developing economies. Most of them don’t have the fiscal space required to react to the pandemic shock; they are already suffering from major capital outflows and a fall in commodity prices, which means their exchange rate will be hammered if they decide to launch expansionary fiscal policies. In these circumstances, help in the form of grants and debt relief, and possibly an outright moratorium,[46] will not only be needed but will be critical.

The global economy is so intricately intertwined that it is impossible to bring globalization to an end. However, it is possible to slow it down and even to put it into reverse. We anticipate that the pandemic will do just that. It has already re-erected borders with a vengeance, reinforcing to an extreme trends that were already in full glare before it erupted with full force in March 2020 (when it became a truly global pandemic, sparing no country), such as tougher border controls (mainly because of fears about immigration) and greater protectionism (mainly because of fears about globalization). Tighter border controls for the purpose of managing the progression of the pandemic make eminent sense, but the risk that the revival of the nation state leads progressively to much greater nationalism is real, a reality that the “globalization trilemma” framework offered by Dani Rodrik captured. In the early 2010s, when globalization was becoming a sensitive political and social issue, the Harvard economist explained why it would be the inevitable casualty if nationalism rises. The trilemma suggests that the three notions of economic globalization, political democracy and the nation state are mutually irreconcilable, based on the logic that only two can effectively co-exist at any given time. [78] Democracy and national sovereignty are only compatible if globalization is contained. By contrast, if both the nation state and globalization flourish, then democracy becomes untenable. And then, if both democracy and globalization expand, there is no place for the nation state. Therefore, one can only ever choose two out of the three – this is the essence of the trilemma. The European Union has often been used as an example to illustrate the pertinence of the conceptual framework offered by the trilemma. Combining economic integration (a proxy for globalization) with democracy implies that the important decisions have to be made at a supranational level, which somehow weakens the sovereignty of the nation state. In the current environment, what the “political trilemma” framework suggests is that globalization must necessarily be contained if we are not to give up some national sovereignty or some democracy. Therefore, the rise of nationalism makes the retreat of globalization inevitable in most of the world – an impulse particularly notable in the West. The vote for Brexit and the election of President Trump on a protectionist platform are two momentous markers of the Western backlash against globalization. Subsequent studies not only validate Rodrik’s trilemma, but also show that the rejection of globalization by voters is a rational response when the economy is strong and inequality is high. [79]

Views, of course, differ radically on which country is “right” or going to come out “on top” by benefiting from the perceived weaknesses and fragilities of the other. But it is essential to contextualize them. There isn’t a “right” view and a “wrong” view, but different and often diverging interpretations that frequently correlate with the origin, culture and personal history of those who profess them. Pursuing further the “quantum world” metaphor mentioned earlier, it could be inferred from quantum physic that objective reality does not exist. We think that observation and measurement define an “objective” opinion, but the micro-world of atoms and particles (like the macro-world of geopolitics) is governed by the strange rules of quantum mechanics in which two different observers are entitled to their own opinions (this is called a “superposition”: “particles can be in several places or states at once”). [92] In the world of international affairs, if two different observers are entitled to their own opinions, that makes them subjective, but no less real and no less valid. If an observer can only make sense of the “reality” through different idiosyncratic lenses, this forces us to rethink our notion of objectivity. It is evident that the representation of reality depends on the position of the observer. In that sense, a “Chinese” view and a “US” view can co-exist, together with multiple other views along that continuum – all of them real! To a considerable extent and for understandable reasons, the Chinese view of the world and its place in it is influenced by the humiliation suffered during the first Opium War in 1840 and the subsequent invasion in 1900 when the Eight Nation Alliance looted Beijing and other Chinese cities before demanding compensation. [93] Conversely, how the US views the world and its place in it is largely based on the values and principles that have shaped American public life since the country’s founding. [94] These have determined both its pre-eminent world position and its unique attractiveness for many immigrants for 250 years. The US perspective is also rooted in the unrivalled dominance it has enjoyed over the rest of the world for the past few decades and the inevitable doubts and insecurities that come with a relative loss of absolute supremacy. For understandable reasons, both China and the US have a rich history (China’s goes back 5,000 years) of which they are proud, leading them, as Kishore Mahbubani observed, to overestimate their own strengths and underestimate the strengths of the other.

Finally, a sure prediction:

For all these reasons, it is almost a tautology to state that the damage inflicted by the pandemic to fragile and failing states will be much deeper and longer-lasting than in the richer and most developed economies. It will devastate some of the world’s most vulnerable communities. In many cases, economic disaster will trigger some form of political instability and outbreaks of violence because the world’s poorest countries will suffer from two predicaments: first, the breakdown in trade and supply chains caused by the pandemic will provoke immediate devastation like no remittances or increased hunger; and, second, further down the line, they will endure a prolonged and severe loss of employment and income. This is the reason why the global outbreak has such potential to wreak havoc in the world’s poorest countries. It is there that economic decline will have an even more immediate effect on societies. Across large swathes of sub-Saharan Africa, in particular, but also in parts of Asia and Latin America, millions depend on a meagre daily income to feed their families. Any lockdown or health crisis caused by the coronavirus could rapidly create widespread desperation and disorder, potentially triggering massive unrest with global knock-on effects. The implications will be particularly damaging for all those countries caught in the midst of a conflict. For them, the pandemic will inevitably disrupt humanitarian assistance and aid flows. It will also limit peace operations and postpone diplomatic efforts to bring the conflicts to an end.

The authors apparently forgetting these countries don’t have many old people, so not many people can die from COVID. Anyway, it appears we don’t yet have the proper statistics to test this one, but I forecast it will be false, with no particular relationship. OWID has some data already, I don’t see much pattern.

We now know that air pollution worsens the impact of any particular coronavirus (not only the current SARS-CoV-2) on our health. As early as 2003, a study published in the midst of the SARS epidemic suggested that air pollution might explain the variation in the level of lethality, [107] making it clear for the first time that the greater the level of air pollution, the greater the likelihood of death from the disease caused by a coronavirus. Since then, a growing body of research has shown how a lifetime of breathing dirtier air can make people more susceptible to the coronavirus. In the US, a recent medical paper concluded that those regions with more polluted air will experience higher risks of death from COVID-19, showing that US counties with higher pollution levels will suffer higher numbers of hospitalizations and numbers of deaths. [108] A consensus has formed in the medical and public community that there is a synergistic effect between air pollution exposure and the possible occurrence of COVID-19, and a worse outcome when the virus does strike. The research, still embryonic but expanding fast, hasn’t proved yet that a link of causation exists, but it unambiguously exposes a strong correlation between air pollution and the spread of the coronavirus and its severity. It seems that air pollution in general, and the concentration of particulate matter in particular, impair the airways – the lungs’ first line of defence – meaning that people (irrespective of their age) who live in highly polluted cities will face a greater risk of catching COVID-19 and dying from it. This may explain why people in Lombardy (one of Europe’s most polluted regions) who had contracted the virus were shown to be twice as likely to die from COVID-19 than people almost anywhere else in Italy.

I doubt this is much causal at the level of air pollution that exists in a typical Western country. But sure enough, one can find a lot of (just kidding, that term is only used when you don’t like the causal model) aggregate-data studies finding such associations.

If you are looking for a hit piece on Schwab, you can try this article (on Fake Guardian-looking website). In fact, this article raised my opinion of him. Considering that he’s 82 years old and still writes about all these topics, that is rather impressive.

Comments on “The Inheritance of Inequality” (Bowles & Gintis, 2002)