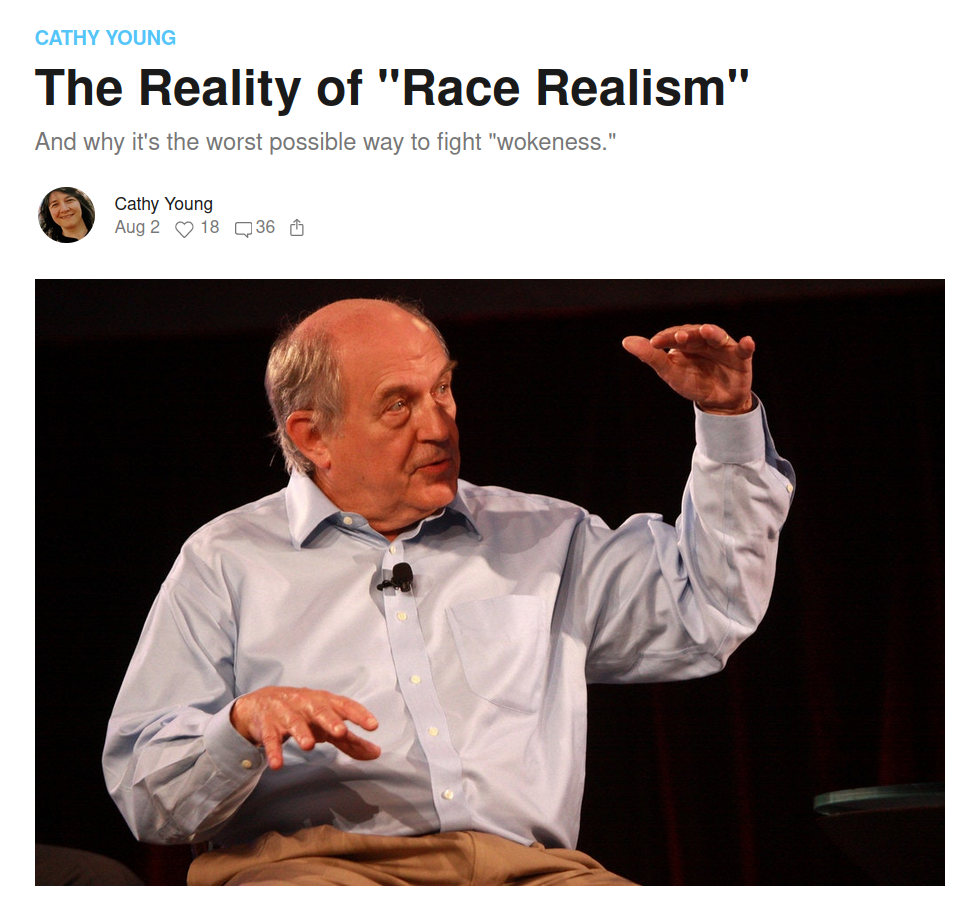 Bo Winegard has a thread on this piece here. I didn’t know about it at the time of writing.

Boomer woman journalist Cathy Young has a new piece out: The Reality of “Race Realism”. Actually, it’s supposed to be a book review of sorts, but Cathy tells us that she hasn’t read the book, but instead has been lazily browsing the timeline of Charles Murray, and watching some podcast:

OK? So what she really wants to talk about is:

There is another aspect to this issue that must be mentioned: The relatively mainstream scholars who advocate frank discussion of racial differences in intelligence and crime while condemning racism in the abstract have been overwhelmingly silent about the racists and bigots who infest the “race realism” or “human diversity” community.

The bad actors are Steve Sailer and Emil Kirkegaard. She enlists Lee Jussim to agree with this, and Jussim approves on his Twitter:

Cathy Young packs tons of nuance here. On why:
1. The study of the genetic bases of "race" differences is a scientific dead end (at least for now)
and
2. A magnet for actual racists
and
3. The worst way to oppose the illiberal worst of wokeness.https://t.co/zFU58kE91a

‘Dark Pirate’ Lee Jussim sure has come a long way during this great awokening. First he spearheaded efforts to promote non-leftist social psychology of stereotypes in Quillette (How a Rebellious Scientist Uncovered the Surprising Truth About Stereotypes, 2015), but since 2020 or so, he has joined the can’t know nothing about race differences, and we shouldn’t look with available methods, ignorance is bliss camp. A bizarre position for him to adopt, but apparently he was facing some internal attacks at his university, so who can say what really lies behind this change of course for the ol’ pirate.

So… since the topic of tone-policing the HBD-heretic crowd came up lately in @CathyYoung63's essay, I'm going to post some excerpts from The Distributist's video-essay on the alt-right post-2018, which I think gives a fair summary of the problem.https://t.co/1T1L5yCKbD pic.twitter.com/m1FwsKbgli

The tactic is by now obvious (Noah Carl also in April):

The boring attacks aside, this topic is not new at all. Let’s go back in time and think about another group of people who explicitly promote contrarian thinking: the Sillycon Valley Rationalists. In particular:

It used to puzzle me that Scott Aaronson still hasn’t come to terms with the obvious absurdity of attempts to make quantum mechanics yield a single world.

I should have realized what was going on when I read Scott’s blog post “The bullet-swallowers” in which Scott compares many-worlds to libertarianism.  But light didn’t dawn until my recent diavlog with Scott, where, at 50 minutes and 20 seconds, Scott says:

“What you’ve forced me to realize, Eliezer, and I thank you for this:  What I’m uncomfortable with is not the many-worlds interpretation itself, it’s the air of satisfaction that often comes with it.”
— Scott Aaronson, 50:20 in our Bloggingheads dialogue.

It doesn’t show on my face (I need to learn to reveal my expressions more, people complain that I’m eerily motionless during these diavlogs) but at this point I’m thinking, Didn’t Scott just outright concede the argument?  (He didn’t; I checked.)  I mean, to me this sounds an awful lot like:

Sure, many-worlds is the simplest explanation that fits the facts, but I don’t like the people who believe it.

And I strongly suspect that a lot of people out there who would refuse to identify themselves as “atheists” would say almost exactly the same thing:

What I’m uncomfortable with isn’t the idea of a god-free physical universe, it’s the air of satisfaction that atheists give off.

If you’re a regular reader of Robin Hanson, you might essay a Hansonian explanation as follows:

Although the actual state of evidence favors many-worlds (atheism), I don’t want to affiliate with other people who say so.  They act all brash, arrogant, and offensive, and tend to believe and advocate other odd ideas like libertarianism.  If I believed in many-worlds (atheism), that would make me part of this low-prestige group.

Or in simpler psychology:

I don’t feel like I belong with the group that believes in many-worlds (atheism).

He’s talking about other topics, but the pattern is the same.

The frustrating thing about people like Cathy Young and Jussim here is that they profess to be interested in the topic, but they are also curiously unwilling to actually engage with it, that is, get their hands dirty. One can look at Cathy defending her views on Twitter:

I'm not an expert on this. However, 2 points:
1. My understanding of the scientific consensus is that the emergence of "races" is too recent for major cognitive difference to evolve (plus, genetic variation within "races" makes talk of "racial differences" far too crude)

This dumb claim was of course the topic of the last post. Cathy is rehearing what a Marxist guy said in an interview 20 years ago as if this was scientific consensus. Most claimed consensuses are fake. This bias even has a name: false consensus effect, yet somehow academics and journalists are all over it. Anecdotes are good when they are on my side. In general, there aren’t that many surveys of scientists, so in general, we don’t know what scientific consensus is on some topic. We do, however, know something about what experts think about race and intelligence for there are a number of surveys. Unfortunately for Cathy, they show the quite wrong results.

The other main point in her ‘book review’ is the usual appeal to consequences fallacy, Arthur Jensen dealt with this red herring the in 1970s. Of course, in this case, there is no real evidence of the ‘atomic bombs’ that will ensure if scientists and society were to be most honest about the reality of race differences.

Against trust in neuroscience