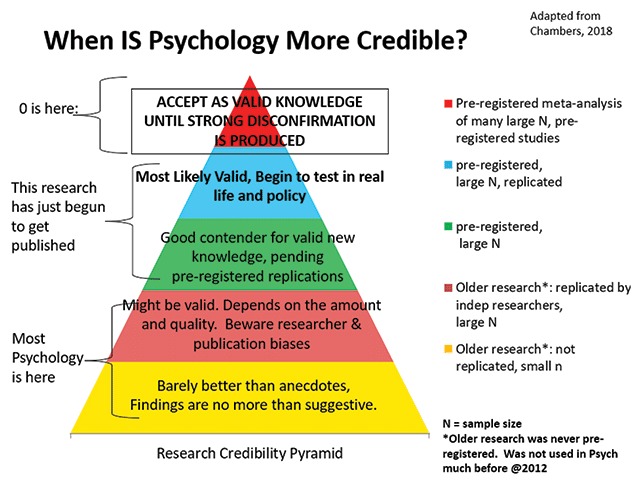 Yes, but let’s look at the wider issue. So you have some question. You want to know whether treatment X works for medical problem M, or whether intervention I works to promote socially desired outcome O. How do you find out? Naturally, you turn to Science™. But which science? You start searching, if you possess above average skills at this, you use Google Scholar. But then you find studies that seem equally good but have opposite conclusions. Which is right? Well, you could try to guess which studies are better using whatever heuristic you can think of, but generally speaking, the right approach is to combine the evidence from all studies of a question into a single summary. This is a called a meta-analysis. Previously, I wrote that if you are interested in medical questions, you can side-step the hard work here and rely on Cochrane reviews, which are very high quality meta-analyses of medical research. However, suppose you heard about how publication bias, p-hacking, fraud, and so on can bias meta-analyses, and now you are wondering again… Some time ago, this model started appearing. Social psychologist Lee Jussim included it here (but apparently it originates from Chris Chambers), and we repost it here (you can find some alternatives in this review).

So the idea is that we know that research that isn’t (pre-)registered is to some extent biased in the direction the authors want, usually towards proving whatever association they like (but sometimes disproving it too). So if we want to avoid this bias, we want to look at studies where this kind of bias is reduced. The best method for this is to rely on studies where the methods were set out before the data were analyzed. Indeed, we want to rely on a meta-analysis of such registered studies. As you can imagine, there are not so many of these in science. But there are some. An example is the Many Labs series of replications. In this setup, many teams decide on a study (or multiple studies), and then each of them runs their own replication, which follows the same protocol and analysis plan. Finally, a meta-analysis of the replications is conducted, which puts us at the top of the hierarchy above. These kind of efforts usually show that a large proportion of initial findings were not true and the rest usually grossly overestimated (Many Labs 2):

We conducted preregistered replications of 28 classic and contemporary published findings, with protocols that were peer reviewed in advance, to examine variation in effect magnitudes across samples and settings. Each protocol was administered to approximately half of 125 samples that comprised 15,305 participants from 36 countries and territories. Using the conventional criterion of statistical significance (p < .05), we found that 15 (54%) of the replications provided evidence of a statistically significant effect in the same direction as the original finding. With a strict significance criterion (p < .0001), 14 (50%) of the replications still provided such evidence, a reflection of the extremely high-powered design. Seven (25%) of the replications yielded effect sizes larger than the original ones, and 21 (75%) yielded effect sizes smaller than the original ones. The median comparable Cohen’s ds were 0.60 for the original findings and 0.15 for the replications. The effect sizes were small (< 0.20) in 16 of the replications (57%), and 9 effects (32%) were in the direction opposite the direction of the original effect. Across settings, the Q statistic indicated significant heterogeneity in 11 (39%) of the replication effects, and most of those were among the findings with the largest overall effect sizes; only 1 effect that was near zero in the aggregate showed significant heterogeneity according to this measure. Only 1 effect had a tau value greater than .20, an indication of moderate heterogeneity. Eight others had tau values near or slightly above .10, an indication of slight heterogeneity. Moderation tests indicated that very little heterogeneity was attributable to the order in which the tasks were performed or whether the tasks were administered in lab versus online. Exploratory comparisons revealed little heterogeneity between Western, educated, industrialized, rich, and democratic (WEIRD) cultures and less WEIRD cultures (i.e., cultures with relatively high and low WEIRDness scores, respectively). Cumulatively, variability in the observed effect sizes was attributable more to the effect being studied than to the sample or setting in which it was studied.

So, about half the findings they studied replicated, and on average, the effect sizes were 25% of the original ones reported (i.e., 75% smaller!). Yikes!

Here we also see that the methods for correcting existing meta-analyses are not sufficient: 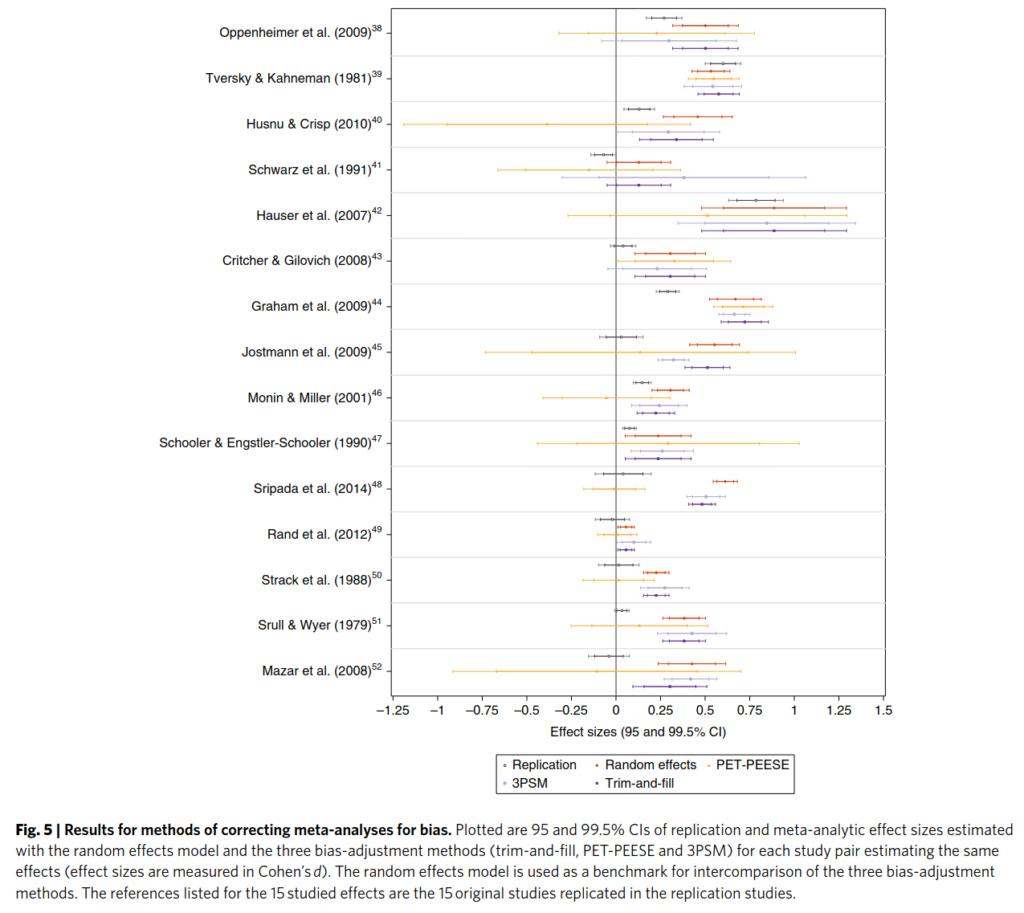 The black line is the meta-analysis of registered trials, the gold standard. The red line is the standard meta-analysis of old studies, no correction for bias. The other colors are methods for dealing with bias. As can be seen, the other colors do not generally get results similar to the black lines, so they are insufficient for dealing with bias in the literature. The least wrong correction method is PET-PEESE (yellow), but as can be seen, it makes confidence intervals very large, so in practice, it is not very useful.

Research on money priming typically investigates whether exposure to money-related stimuli can affect people’s thoughts, feelings, motivations, and behaviors (for a review, see Vohs, 2015). Our study answers the call for a comprehensive meta-analysis examining the available evidence on money priming (Vadillo, Hardwicke, & Shanks, 2016). By conducting a systematic search of published and unpublished literature on money priming, we sought to achieve three key goals. First, we aimed to assess the presence of biases in the available published literature (e.g., publication bias). Second, in the case of such biases, we sought to derive a more accurate estimate of the effect size after correcting for these biases. Third, we aimed to investigate whether design factors such as prime type and study setting moderated the money priming effects. Our overall meta-analysis included 246 suitable experiments and showed a significant overall effect size estimate (Hedges’ g = .31, 95% CI [0.26, 0.36]). However, publication bias and related biases are likely given the asymmetric funnel plots, Egger’s test and two other tests for publication bias. Moderator analyses offered insight into the variation of the money priming effect, suggesting for various types of study designs whether the effect was present, absent, or biased. We found the largest money priming effect in lab studies investigating a behavioral dependent measure using a priming technique in which participants actively handled money. Future research should use sufficiently powerful preregistered studies to replicate these findings. 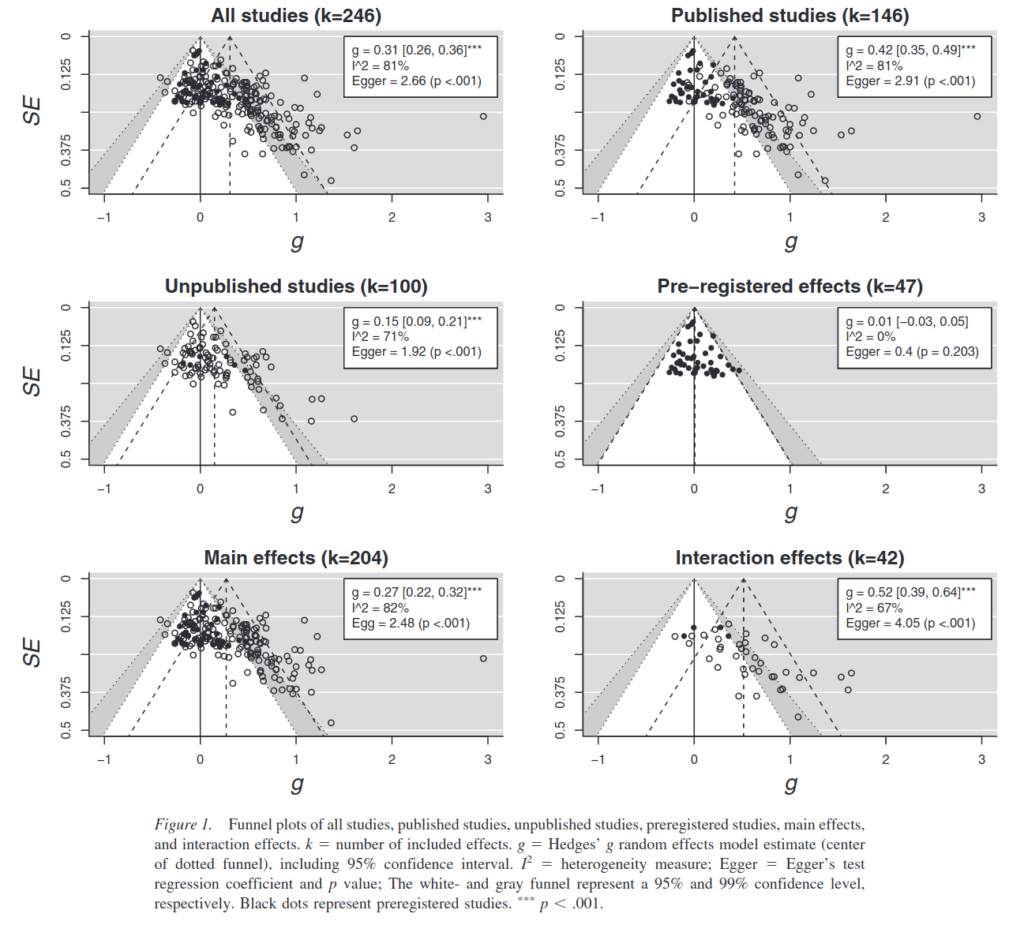 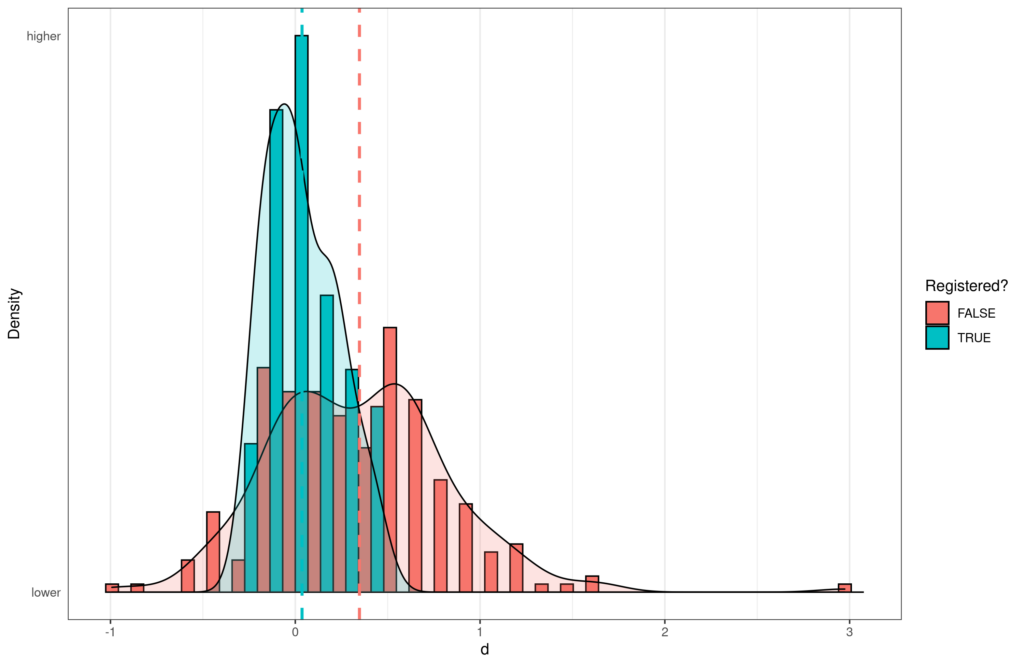 The distributions of effect sizes by registration status. 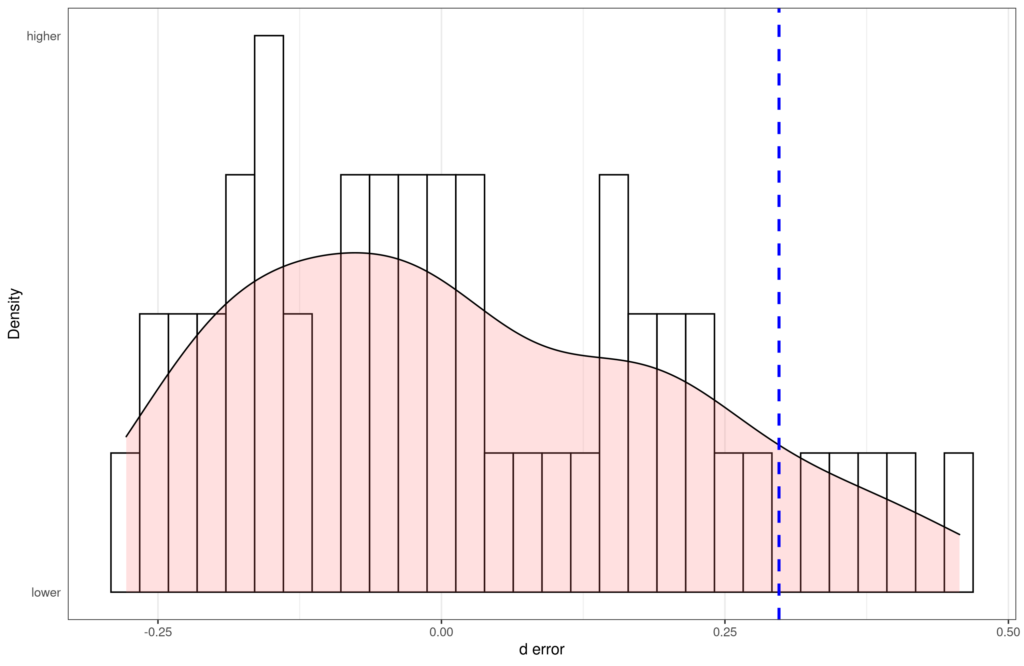 PS. If you are wondering why my reanalysis has n=51 vs. n=47 above, it is because the authors excluded a few studies because they were based on interaction effects. Their own analysis shows this doesn’t matter (Appendix A in their paper).