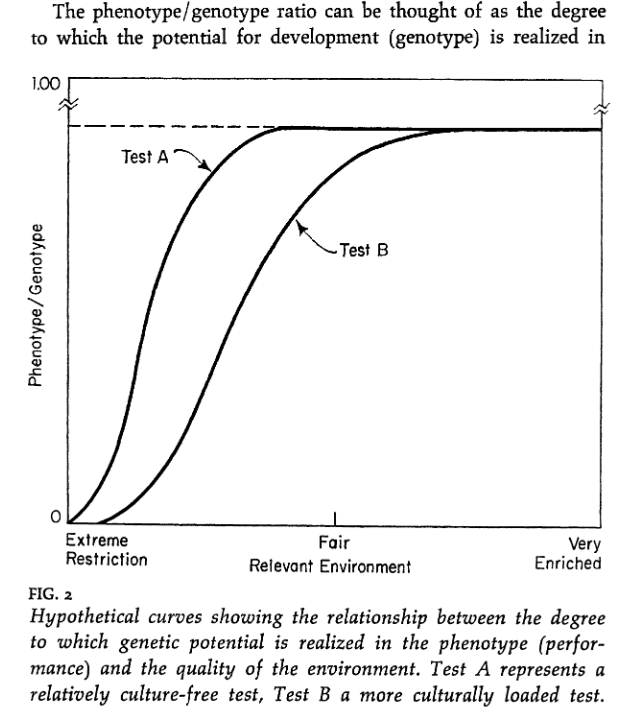 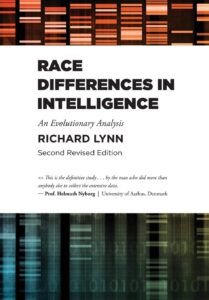 Recently I got a private question from anon:

A quick question if you don’t mind: how come Blacks from sub-Saharan Africa have an average IQ of 70, which is even lower than that for Blacks from the United States (85)? Shouldn’t it be the case that both of these groups have a similar IQ? After all, both Blacks from Africa and Blacks from the US originally come from the same continent. Or am I missing something?

These kind of questions are common enough that I think it is worth explaining the standard hereditarian thinking on the matter. I say standard because it is right there in Richard Lynn’s writings (Race differences in intelligence), and he’s the living grand old man of race differences. So let’s quote that book!

The average IQ of 71 of sub-Saharan Africans shown in Table 4.1 is a function of both genetic and environmental factors. We now undertake the task of estimating the genotypic African IQ. This is the IQ that Africans would have if they were raised in the same environment as Europeans. The starting point of this analysis is the Minnesota Transracial Adoption Study, the results of which showed that a 17 IQ point difference between African Americans and Europeans is still present when they are reared in the same family environments. The conclusion to be drawn from this is that the African-American–European IQ difference in the United States is wholly genetically determined. Although this study showed a 17 IQ point African-European IQ difference, it is reasonable to assume that the true African-American–European difference is 15 IQ points, as shown by the numerous studies summarized in Table 4.5, and that the 17 IQ point difference obtained in this study is a sampling error. We conclude therefore that the genotypic IQ of African Americans is 15 IQ points below that of American Europeans. A further argument for believing that the IQ of African Americans is wholly genetically determined is that it has remained constant over a period of approximately 80 years despite the great improvements in the environment of African Americans relative to that of Europeans.

The conclusion that African Americans have a genotypic IQ of 85 does not mean that Africans in sub-Saharan Africa also have a genotypic IQ of 85. African Americans are not pure Africans but are a hybrid population with a significant amount of European ancestry. This has been estimated at 25 percent by Reed (1971) and by Chakraborty, Kamboh, Nwankwo, and Ferrell (1992). We can estimate that pure Africans in Africa and in the United States have a genotypic IQ of 80 and that this IQ increases by 0.2 IQ points for every one percent of Caucasoid genes. Thus, the average African American will have an IQ of 85 (80 + [25 x 0.2] = 85), a figure confirmed by numerous studies summarized in Table 4.4. In the Southeastern states the percentage of European genes among African Americans is quite low. For instance, in South Carolina it has been estimated at six percent (Workman, 1968), and in Georgia at 11 percent (Reed, 1969). These admixtures of European genes should raise their IQ by 1.2 and 2.2 IQ points, respectively, giving them an IQ of 81.2 and 82.2. This prediction has been confirmed by the study of 1,800 African Americans in five Southeastern states by Wallace Kennedy, Van der Reit, and White (1963), which found their IQ on the 1960 Stanford-Binet was 80.7.

So the simple model here is that for a given population: phenotypic IQ mean = genotypic mean IQ + environmental mean IQ effect. Lynn concludes that the African American vs. European American (black-white) gap is ~100% heritable based on the stability across 100+ years and the findings from the best cross-racial adoption study (Minnesota Transracial Adoption Study, note how we link to pre-woke censored versions of articles). You can argue this is insufficient evidence, but assume it for the sake of argument. Now, we know that African Americans are admixed between European and African ancestors. If we assume both are representative of their respective populations for intelligence polygenic scores, then we will get a prediction about the slope of European ancestry in African Americans (and other mixed populations). This slope has now been empirically verified in the PING dataset (2019), PNC dataset (2019), and the ABCD dataset (2021), as well as a smaller ad hoc dataset obtained by Russell Warne (2020). Lynn guesses at a 80 genotypic IQ for African Americans, and a 0 IQ environmental effect. This then results in the predicted slope of about 0.2 IQ per European%, based on an assumption of 20% average European ancestry. Lynn’s value is somewhat out of date, modern studies find something closer to 18% but OK, too small to care about for a crude model. What slope do we find? Let’s look at the most recent study, ABCD: 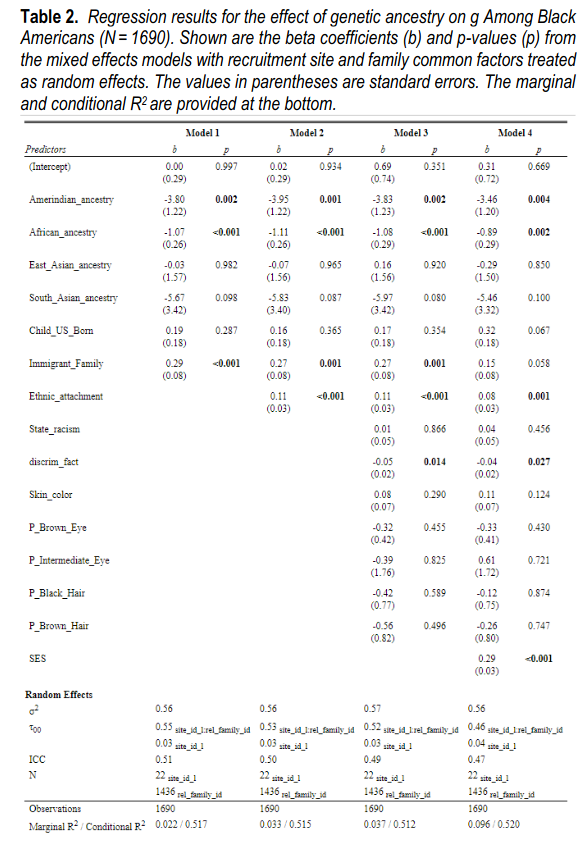 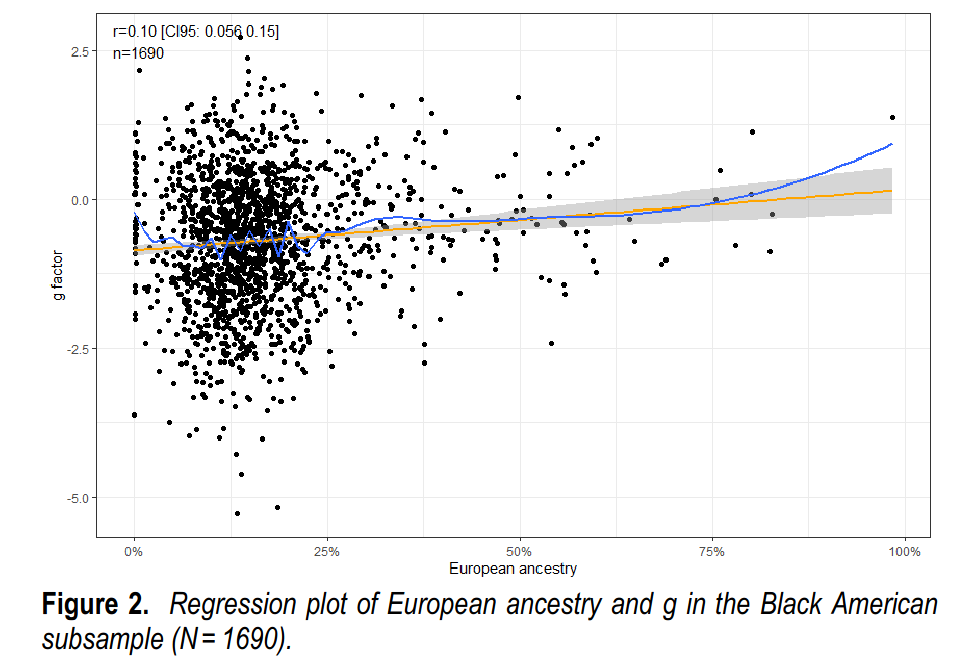 The regression models didn’t use IQs, but rather used standardized scores (z-scores). But then also didn’t use White norms, so their 1 SD does not correspond to 15 IQ, but rather like 17 IQ or so. We can convert back to IQs using the White sample SD which is 0.86. So the slope is about 1.07, depending on which model. That is, going from 0% to 100% European ancestry produces an intelligence gain of 1.07 d, which is 1.24 white SDs (1.07/0.86), or 18.6 IQ. Lynn’s prediction was 20 IQ (0.2 * 100 = 20), so this value is off by less than 10%. Pretty accurate! In that model they did not control for parental SES, which of course, environmentalists think you should control, and hereditarians say that controlling it is difficult to interpret because that’s the sociologist fallacy. What this means is that on the hereditarian account, parental SES has a genetic component that overlaps with intelligence, and differs genetically for these two groups. Thus when you equalize for parental SES, you are indirectly equating the groups by part of the real genetic difference in intelligence too, so the resulting slope estimate will be too small.

Anyway, so the values work out in this case. What does this mean for African African (Black African) IQs? Well, these come out at about 70 (65-75 range). The gap to European Americans here then about 30 IQ, and about 15 IQ to African Americans. However, since we are working with a 80 genotypic IQ mean for African Americans, the gap is 10 IQ. These last 10 IQ are then assumed to be environmental in origin of the very poor environment in Africa. Lynn thinks this is mainly health related, through stunting from bad or entirely lacking nutrition, and health damage from infectious diseases. This also means that the between group heritability is about 67%, since 20 IQ of the 30 IQ gap are genetic in origin, and 10 IQ (33%) are environmental. This also then predicts that as environments continue to improve, and reach parity insofar as IQ scores are concerned (end of Flynn effect), then African Africans should reach about 80 IQ. Hereditarian optimism!

This model of environment as having diminishing returns is what underlies the theory behind the Scarr-Rowe model. The idea here from Sandra Scarr was that European Americans were already at or near the optimal environment with respect to IQ scores, and African Americans still had more room to grow. Thus, their scores should be less heritable, as they were still under this remaining environmental effect. It is a theory that makes a lot of sense, but it seems false on account of our meta-analysis. Eric Turkheimer is then trying to do damage control by lying about the origins and applications of this theory (you can see why here). It is however, very plain to see in reading the actual Sandra Scarr paper from 1971: Race, Social Class, and IQ: Population differences in heritability of IQ scores were found for racial and social class groups:

The genetic differences hypothesis, as it applies to social class groups within races, centers on the issues of assortative mating by IQ and selective migration, based on intelligence, within the social structure. Social class differences in mean IQ are assumed to be principally genetic in origin and to result from the high heritability of IQ throughout the population, assortative mating for IQ, and a small covariance term that includes those educational advantages that brighter parents may provide for their brighter children (3, 10). Social class differences in phenotypic IQ are assumed to reflect primarily the mean differences in genotype distribution by social class; environmental differences between social class groups (and races) are seen as insignificant in determining total phenotypic variance in IQ. Therefore, the proportion of genetic variance in IQ scores is predicted to be equally high for all social class groups (and for both races). Figures 1 and 2 present models, 1 and 2, respectively, as they apply to social class. In model 1, there are assumed to be SES is equal distributions of genotypes across social classes. In model 2, there are assumed to be unequal distributions of genotypes for IQ, the lower class having proportionally more genotypes for low IQ and the upper social groups having proportionally more genotypes for high IQ. Environmental effects of social class are posited to be strong in model 1 and very weak in model 2.

So for Scarr, and people replying to Scarr’s paper, the differential heritability is tightly related to group gaps, whether SES or racial groups. This is abundantly clear from even the title of the paper.

Notice the threshold effect line, though not mentioned in the text, this model had been explicated previously by Arthur Jensen already in 1968: Social class, race and genetics: Implications for education:

So hopefully this provides a useful origin tale of this famous model and it’s application.

While we are at this, it is worth also covering the case of elite migrants, since this is a related question where mistakes are often made. In the USA, there are various elite migrants from relatively low IQ countries. For instance, Nigerians of Igbo ancestry and Indian Brahmins are often discussed. Now, based on a simple model one can quickly go wrong. Suppose African Africans are around 70, and we pick some elites from there to settle in the USA. Let’s say these elites are around 120, so fairly typical professionals by European standards. This is some 50 IQ (!) above the mean in Africa. So with regression towards the mean, we expect their children to reverse halfway back, so to 75+25=95 IQ. Yet, we find that this is not the case when we study children of such elites. So hereditarianism must be false! This is an argument often used by people like Chanda Chisala. One mistake here, ironically, is that the environmental disadvantage part is forgotten. On Lynn’s model which we went over above, there is a 10 IQ loss of growing up in African environments. This disadvantage is removed for the children who grew up in the USA. So the predicted IQ is not 95, but 110 (halfway to 80 from 120 is 100, +10 for the removed disadvantage). If one further thinks that Igbos are not at genotypic mean of 80 like the slaves that ended up in the Americas, but maybe more in the 85-95 region, then one has to apply less regression towards the mean as well. On the other hand, if the parents had above average upbringing at home, their environment did not provide -10 IQ but something less, so one has to do a smaller adjustment. Igbos are a merchant class, and these are usually at elevated IQs compared to the general population. Ashkenazis are probably around 110 genotypic IQ (see our prior study), and the Parsis of India are also higher but I don’t know of any studies.

If you found this explainer useful, you may want to subscribe to my Substack. Substack takes a hefty 10% fee, so Paypal is actually somewhat preferable. If you are interested in giving a larger sum towards research, get in touch. There’s no money coming from universities to this kind of work.

Paige-Harden, Turkheimer and the psychometric left