A much more in depth reply to one of Richardson’s papers was written by Zeke Jeffrey here.

Since philosophy blogger RaceRealist is on a mission to promote Ken Richardson, it seems we need to discuss his various claims a bit more. Hence, this post is an FAQ about his claims.

Is there agreement on definition of “intelligence” and how to measurement it?

“As we approach the centenary of the first practical intelligence test, there is still little scientific agreement about how human intelligence should be described, whether IQ tests actually measure it, and if they don’t, what they actually do measure.” (Richardson 2002)

Richardson cherry picks some quotes to make his point. However, there is plenty of agreement about the description of intelligence and how to measure it. See results in surveys going back to the 1980s: Snyderman & Rothman 1987, 1988, Reeve & Charles 2008 (in Scott Alexander’s words “97% of expert psychologists and 85% of applied psychologists agree that IQ tests measure cognitive ability “reasonably well””). A typical mainstream statement of definition is that offered by Gottfredson 1994:

A very general mental capability that, among other things, involves the ability to reason, plan, solve problems, think abstractly, comprehend complex ideas, learn quickly and learn from experience. It is not merely book learning, a narrow academic skill, or test-taking smarts. Rather, it reflects a broader and deeper capability for comprehending our surroundings—”catching on,” “making sense” of things, or “figuring out” what to do.

One can also consult every mainstream textbook on the topic.

IQ tests are merely clever numerical surrogates for social class. The numerous correlations evoked in support of g arise from this. (Richardson 1999)

It suggests that all of the population variance in IQ scores can be described in terms of a nexus of sociocognitive-affective factors that differentially prepares individuals for the cognitive, affective and performance demands of the test—in effect that the test is a measure of social class background, and not one of the ability for complex cognition as such. (Richardson 2002)

There are easy and obvious ways to test this idea. First, if IQ tests measure social class, they should be very strongly related to social class/status (SES), either of oneself or one’s parents, as in r = .90 or so (measuring the same thing minus some measurement error). In fact, they are correlated about .35 (Hanscombe et al 2012) with parental SES and about .60 with one’s own adult SES (Strenze 2007 presents a meta-analysis but does not have a composite SES measure, however we reported this in, e.g., our Argentina study .55, Kirkegaard & Fuerst 2017).

Second, one can look at siblings, who of course are known to vary widely in IQ, differing on average by 12 IQ, whereas random people differ by 17 IQ. Many large studies (e.g. Frisell et al., 2012; Hegelund et al., 2019; Murray, 2002, Aghion et al 2018) have shown that these sibling differences in IQ predict outcomes well, sometimes as well as between families, usually with some loss (maybe 15% on average).

Third, as an easier alternative to the second point above, one can also just adjust for parental SES in a regression and see whether IQ still predicts stuff. The Bell Curve (Herrnstein & Murray, 1994) of course famously did this and found that IQ usually predicts the best of the two. These results were also recently replicated for SAT and university education outcomes by Higdem et al 2016: 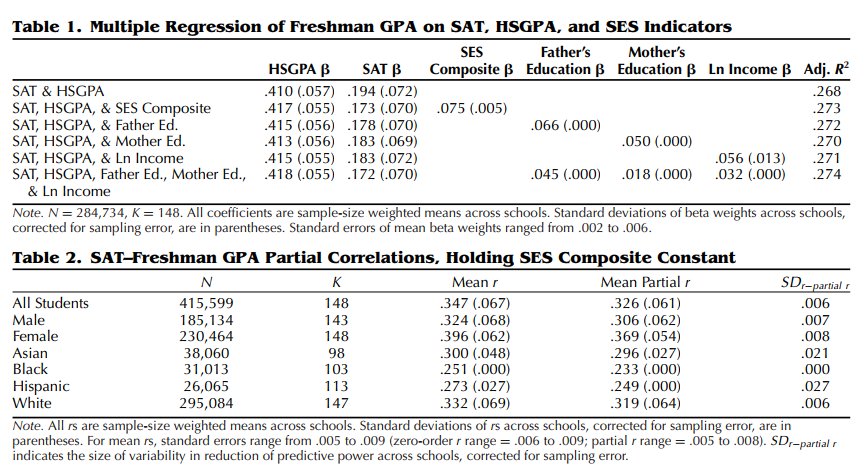 In table 1, compare lines 1 vs. 2 to see influence of parental SES. The model R2 hardly changes (.268 to .273) and the beta change for SAT is minor (.194 to .173). Table 2 shows values where they calculated the partial correlation, i.e. removed statistical dependency of parental SES for both outcomes and then showed the correlations among the remaining variables by subgroup. They are all substantial. Note that range restriction causes the correlations to differ by group.