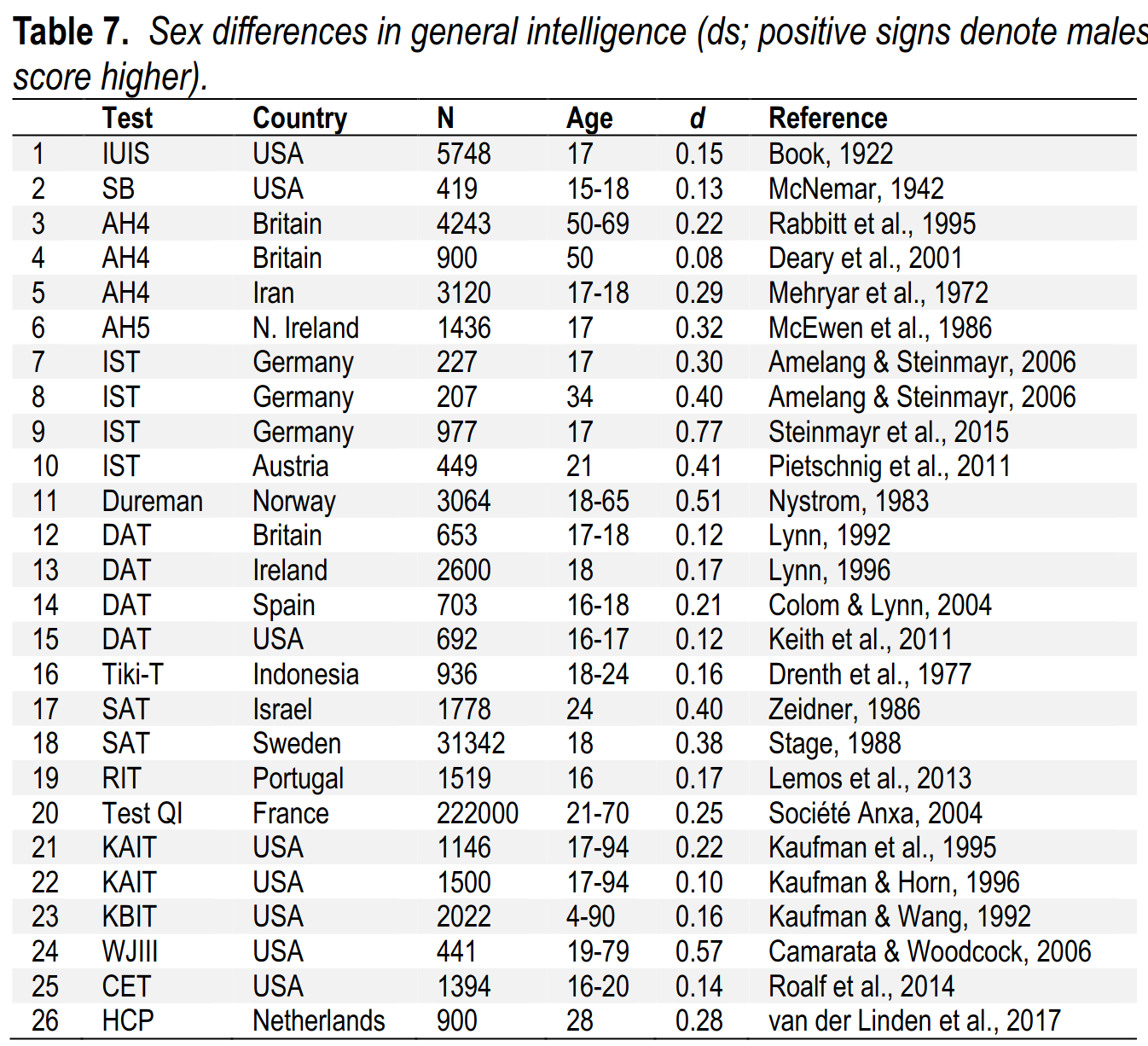 I do not maintain any strong position on the claim at all. The only thing I say is that I think the claim (of substantial difference in mean) is currently not based on strong evidence. Further, to solve the question, I argue the best bet is to get better within-family evidence.

This kind of claim is very common, even among people who explicitly reject blank slatism. It is odd because there are such results around, and they have been around for a long time. Richard Lynn, as usual, deserves credit for going against the stream and arguing the evidence-based contrarian position while others make claims of no gaps citing nothing. A recent summary by Lynn 2017:

The equal intelligence of males and females has been almost invariably asserted from the early twentieth century up to the present. Two of the first to advance this conclusion were Burt and Moore (1912) and Terman (1916). In the second half of the century it was frequently restated. Typical conclusions by leading authorities are those of Cattell (1971, p. 131): “it is now demonstrated by countless and large samples that on the two main general cognitive abilities –fluid and crystallized intelligence – men and women, boys and girls, show no significant differences”; Brody (1992, p. 323): “gender differences in general intelligence are small and virtually non-existent”; Eysenck (1981, p. 40): “men and women average pretty much the same IQ”;Herrnstein and Murray (1994, p. 275): “the consistent story has been that men and women have nearly identical IQs”; Mackintosh (1996): “there is no sex difference in general intelligence worth speaking of ”; and Hutt (1972, p. 88): “there is little evidence that men and women differ in average intelligence”. Others who stated the same conclusion include Maccoby and Jacklin (1974, p. 65) and Geary (1998, p. 310).

It is a paradox that males have a larger average brain size than females, that brain size is positively associated with intelligence, and yet numerous experts have asserted that there is no sex difference in intelligence. This paper presents the developmental theory of sex differences in intelligence as a solution to this problem. This states that boys and girls have about the same IQ up to the age of 15 years but from the age of 16 the average IQ of males becomes higher than that of females with an advantage increasing to approximately 4 IQ points in adulthood.

The Wechsler-Bellevue Intelligence Scale (WBIS) was constructed in the United States in the mid-1940s by Wechsler and was designed for those aged 16 years into old age. It has been through four revisions designated the WAIS (Wechsler Adult Intelligence Scale), WAIS-R, WAIS-III and WAIS-IV. It consists of six verbal subtests designated Information, Vocabulary, Arithmetic, Similarities, Comprehension and Digit Span which are averaged to give the Verbal IQ, and five performance subtests designated Picture Completion, Picture Arrangement, Object Assembly, Block Design and Digit Symbol which are averaged to give the Performance IQ. The Verbal IQ and Performance IQ are averaged to give the Full Scale IQ. The results of studies of sex differences on the WAIS tests are summarized in Tables 5 and 6.

What about other tests? Assortment of general intelligence tests: 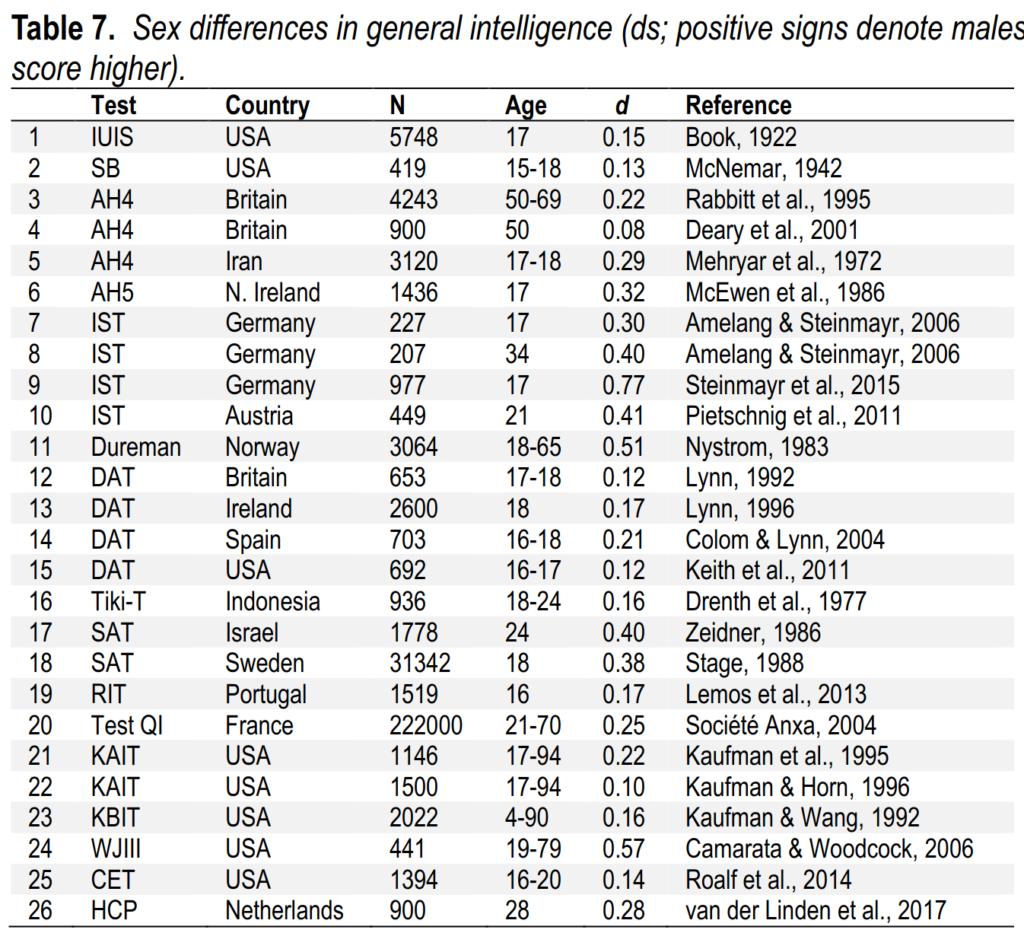 In all these studies males obtained higher IQs than females. There is a wide range of results from the male advantage of .08d to .77d with a median of .22d.Note that the male advantage of .15d among 17 year olds reported in 1922 and given in row 1 is virtually identical to that of .14d reported in 2014 for the same age group by Roalf et al. (2014) disconfirming the thesis advanced by Feingold (1988), Flynn (2012) and Mackintosh (2011) that a male advantage in former years had disappeared by the twenty-first century. The tests are identified in the Appendix.

A meta-analysis is presented of 57 studies of sex differences in general population samples on the Standard and Advanced Progressive Matrices (SPM and APM, respectively). Results showed that there is no difference among children aged 6–14 years, but that males obtain higher means from the age of 15 through to old age. Among adults, the male advantage is 0.33d equivalent to 5 IQ points. These results disconfirm the frequent assertion than there are no sex differences on the progressive matrices and support a developmental theory that a male advantage appears from the age of 15 years. A meta-analysis of 15 studies of child samples on the Colored Progressive Matrices showed that among children aged 5–11 years boys have an advantage of 0.21d equivalent to 3.2 IQ points.

Males have larger brains than females, even when corrected for body size, and brain size is positively correlated with intelligence. This leads to the expectation that males should have higher average levels of intelligence than females. Yet the consensus view is that there is no sex difference in general intelligence. An examination of the literature shows that the consensus view is wrong. Among adults, males have slightly higher verbal and reasoning abilities than females and a more pronounced superiority on spatial abilities. If the three abilities are combined to form general intelligence, the mean for males is 4 IQ points higher than the mean for females. Among children up to the age of around 14 yr the sex differences are smaller because girls mature earlier than boys. The evolutionary selection pressures responsible for greater intelligence in males are discussed.

That’s 3 meta-analyses. There’s also single very large studies, like the one with 40000 adults from United Kingdom I covered in 2017. There is some contrary evidence, the best I know of is this brother-sibling sibling using NLSY79. I am not entirely sure why we want a sibling design here, as the question is about the mean difference, not specifically its cause. Sibling comparisons is about figuring out causes of such a gap. Anyway, here’s what they find (Deary et al 2007):

There is scientific and popular dispute about whether there are sex differences in cognitive abilities and whether they are relevant to the proportions of men and women who attain high-level achievements, such as Nobel Prizes. A recent meta-analysis (Lynn, R., and Irwing, P. (2004). Sex differences on the progressive matrices: a meta-analysis. Intelligence, 32, 481–498.), which suggested that males have higher mean scores on the general factor in intelligence (g), proved especially contentious. Here we use a novel design, comparing 1292 pairs of opposite-sex siblings who participated in the US National Longitudinal Survey of Youth 1979 (NLSY1979). The mental test applied was the Armed Services Vocational Aptitude Battery (ASVAB), from which the briefer Armed Forces Qualification Test (AFQT) scores can also be derived. Males have only a marginal advantage in mean levels of g (less than 7% of a standard deviation) from the ASVAB and AFQT, but substantially greater variance. Among the top 2% AFQT scores, there were almost twice as many males as females. These differences could provide a partial basis for sex differences in intellectual eminence. 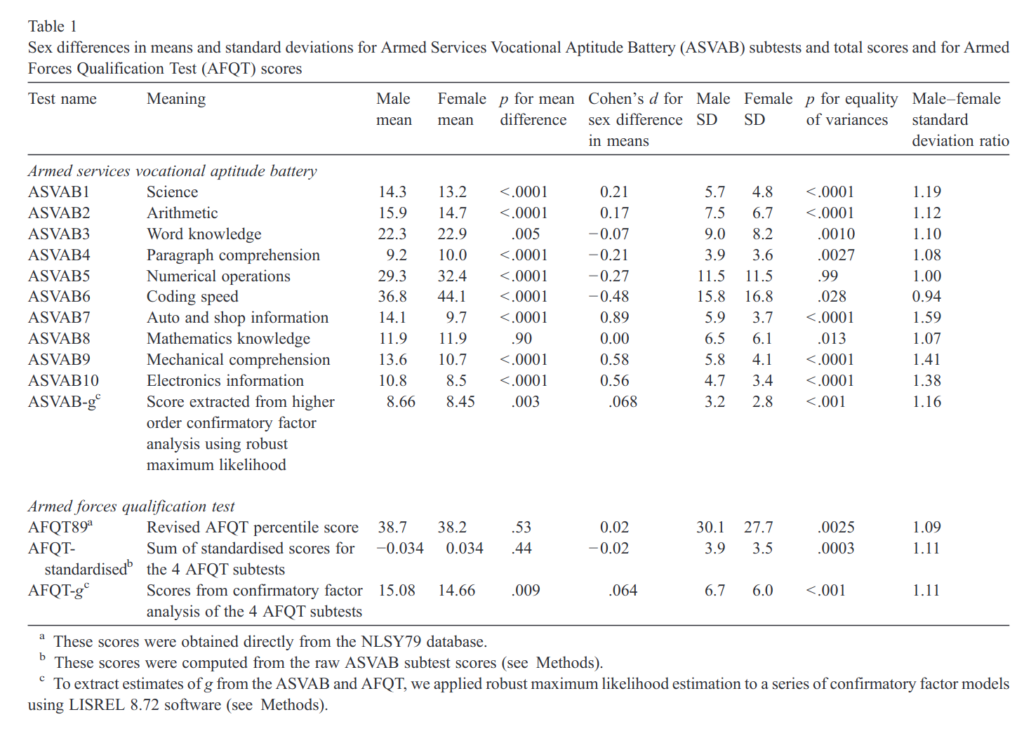 So, d = 0.064 (1 IQ) in their preferred SEM specification (and who knows how many they tried). With their sample size, I don’t see what the 95% confidence interval is, but I am guessing it is wide enough to include Lynn’s typical 3-4 IQ estimates. The testing age is on the low side for Lynn’s model, so it is not that relevant anyway.

The stronger paper is the one based on East European data that James Thompson covered at length in 2016 (Iliescu et al 2016). Their paper doesn’t have a proper abstract, but this is their best table: 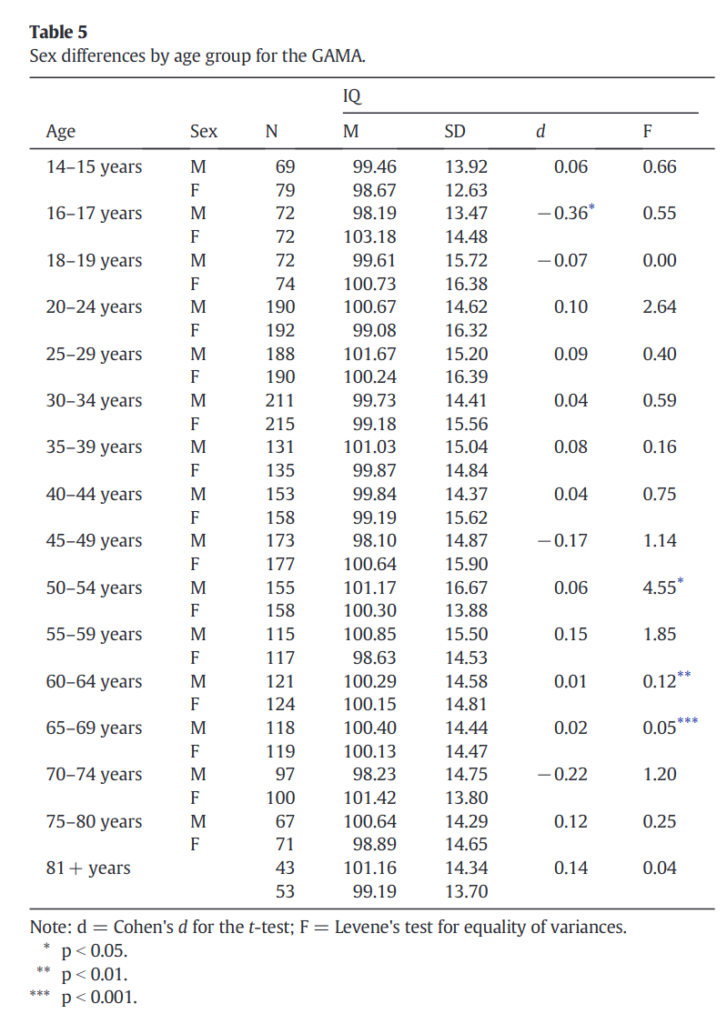 Which shows no impressive male advantages. Nevertheless, boys and men actually do better in general across all their comparisons, just not very much (cf. Thompson’s commentary). I would hazard an ad hoc hypothesis about sex difference in brain drain and emigration, such that intelligence is a stronger cause for emigration for men rather than women, resulting in a sampling bias in favor of women who stayed. Just a guess. One could hazard a different one based on differences in sex differences in g by population, with larger gaps in WEIRD populations. Piffer (2014) once reported some weak evidence of this kind of model, but maybe it can be substantiated. Asians also show fair sized male advantages, e.g. a 2020 study of Taiwan’s WAIS-4 adaption shows 4.4 IQ advantage.

In general, it is false to say that there is no strong evidence for sex differences in intelligence. As far as I know, all large recent meta-analyses of adults show this pattern. Meta-analyses are the strongest evidence we have. These studies have large samples, and low researcher degrees of freedom, and data were usually collected and reported by 3rd parties — indeed, 3rd parties with an interest in not finding such differences. Richard Lynn should be credited with his justified contrarianism here.