Reading up on the huge animal breeding literature gives a useful background to one’s thinking about what selection on humans will do in the future (embryo selection and direct editing á la CRISPR).

I made the above infograph some time ago, maybe 1-2 years. It is still pretty accurate. The newest data for genome sequencing does not look much different.

Steve Hsu has been following some of the animal breeding literature, e.g. Frontiers in cattle genomics. 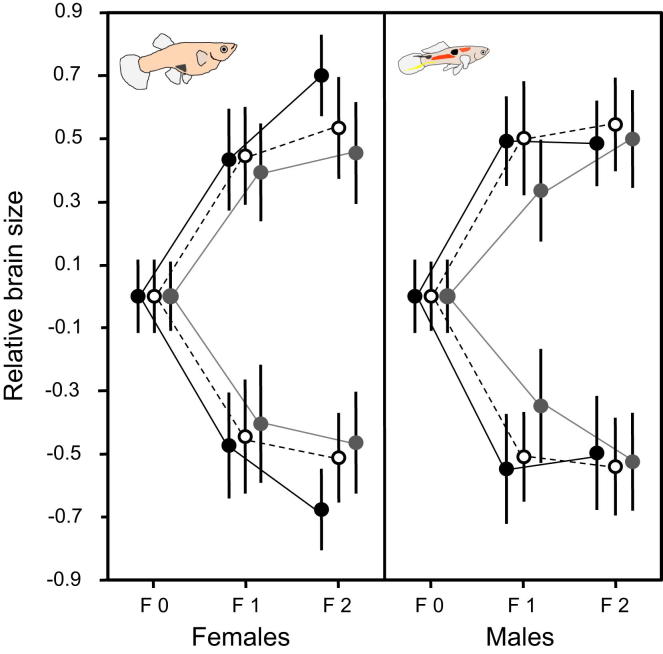 There is also the famous rat maze ability experiments. Solving mazes is g-loaded in humans (Jensen, 1980, book). A good review is Tolman and Tryon Early research on the inheritance of the ability to learn. 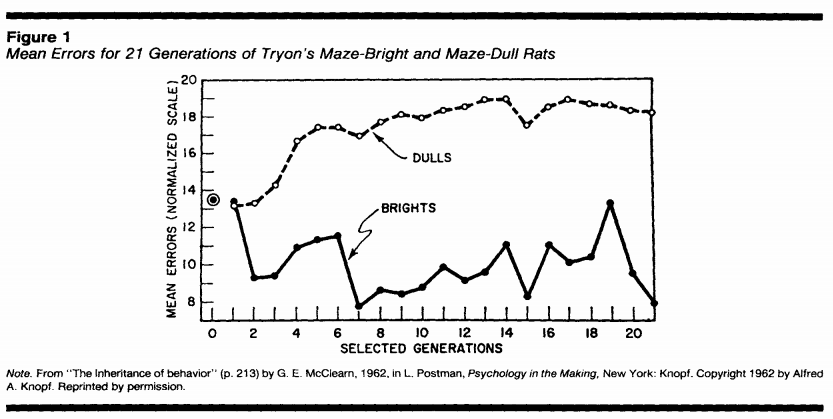 The most new and interesting part in relationship to humans is using genomic predictors alone. There is a recent, easy to read review: Understanding genomic selection in
poultry breeding. 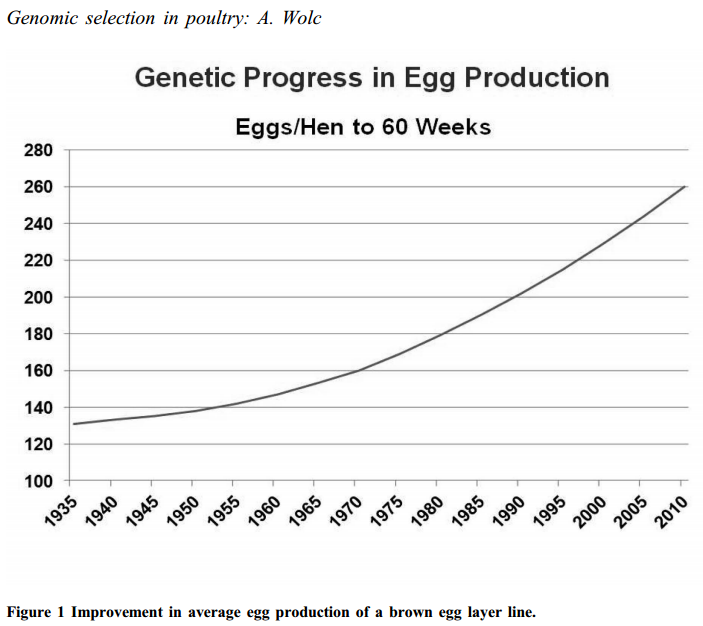 Because the animal breeding field has been going for so long, one find 100s if not 1000s of these types of graphs, yet they are still exciting. One might wonder: is there nothing one cannot select for? It seems no matter the trait, evolution finds a way. Dawkins seems to agree:

Political opposition to eugenic breeding of humans sometimes spills over into the almost certainly false assertion that it is impossible. Not only is it immoral, you may hear it said, it wouldn’t work. Unfortunately, to say that something is morally wrong, or politically undesirable, is not to say that it wouldn’t work. I have no doubt that, if you set your mind to it and had enough time and enough political power, you could breed a race of superior body-builders, or high-jumpers, or shot-putters; pearl fishers, sumo wrestlers, or sprinters; or (I suspect, although now with less confidence because there are no animal precedents) superior musicians, poets, mathematicians or wine-tasters. The reason I am confident about selective breeding for athletic prowess is that the qualities needed are so similar to those that demonstrably work in the breeding of racehorses and carthorses, of greyhounds and sledge dogs. The reason I am still pretty confident about the practical feasibility (though not the moral or political desirability) of selective breeding for mental or otherwise uniquely human traits is that there are so few examples where an attempt at selective breeding in animals has ever failed, even for traits that might have been thought surprising. Who would have thought, for example, that dogs could be bred for sheep-herding skills, or ‘pointing’, or bull-baiting?

[from The Greatest Show on Earth]

Selection for High and Low Fatness in Swine 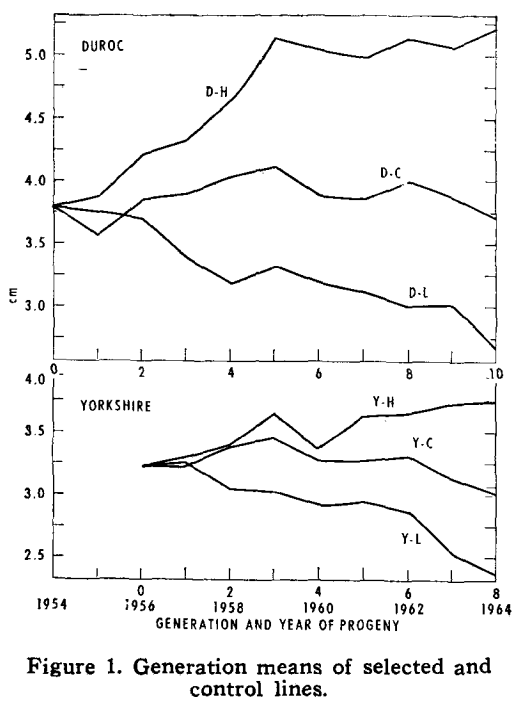 Also interesting is that selective breeding makes it possible to estimate realized heritability, not just from family relationships. 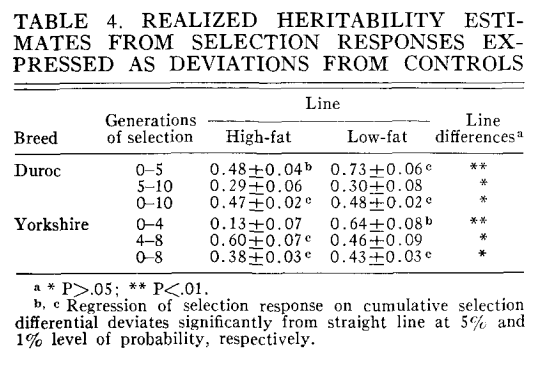 I think we will see some interesting humans in the future. The reason is this: embryo selection is very close and genetic engineering is fairly close. If some countries ban them, others will allow them. Or one can sail or fly to a seastead. Or use any number of black market solutions that will inevitably spring up. Probably, not all jurisdictions will ban it, so there will be reproductive havens+tourism just like there are tax havens and even suicide havens. I don’t think Western governments will dare to force abortions on pregnant returnees, so there is nothing much they can do at that point. There is also of course the near-impossibility of proving that a fetus is a result of embryo selection, not normal fertilization. After all, embryo selection is just choosing between actual possibilities (hopefully, philosophy readers will allow me the flagrant abuse of modal terminology). If everybody starts having healthier children by using this technology, there will be no way to prove that a particular couple ‘cheated’. It is only in the aggregate one can prove that something is going on. A particular couple may just have been lucky. As for direct editing, it may be possible to spot genetically, but I doubt this will happen.

In the EU, I suspect the legality of this practice will come down to legal interpretation. The EU has a CHARTER OF FUNDAMENTAL RIGHTS OF THE EUROPEAN UNION, in which one can read:

Article 3
Right to the integrity of the person
1.   Everyone has the right to respect for his or her physical and mental integrity.
2.   In the fields of medicine and biology, the following must be respected in particular:
(a) the free and informed consent of the person concerned, according to the procedures laid down by law;
(b) the prohibition of eugenic practices, in particular those aiming at the selection of persons;
(c) the prohibition on making the human body and its parts as such a source of financial gain;
(d) the prohibition of the reproductive cloning of human beings.

But given that selection of persons is widely done for e.g. Down’s syndrome, (b) is clearly ignored in practice. (c) is also ignored e.g. for sperm and egg selling, altho they call it donation (with a nice monetary benefit in return). So, the best hope is that embryo selection for medical reasons will sneak into practice and become so standard that it would seem outlandish to ban it. This is well underway. When the public comes to accept it, the judges will probably make up some legal reason to interpret (b) narrowly, e.g. as to refer to forced sterilization. One may be able to find support for this in the background work for this charter, altho I haven’t looked into it.

Given that the technology will likely come into wide-scale practice within the next couple of decades, what remains to be researched more — a lot more — is how people will actually make choices. When prospective parent(s) have to make decisions re. which embryos to implement, there will be a choice. With a limited choice of embryos, one cannot simultaneously maximize all desirable traits and minimize all undesirable traits. There will probably be clear trends in this: few will select against intelligence, few will select short boys, few will select nasty diseases, most will select for health and happiness. People like Helen Henderson are not common:

I can say, without hesitation, that my life has been richer because I have MS. How can anyone who has no experience with disabilities understand that?

If they still try to get children with horrible genetic diseases, the government probably (should?) will step in and ban it.

Still, there will be lots of variation. This variation in selective pressure between people should — together with strong assortative mating — result in divergence of human lines. This is will be similar akin to dog, cat and horse breeds. Assortative mating is apparently so strong that people even choose pets that are similar to themselves: Self seeks like: many humans choose their dog pets following rules used for assortative mating. 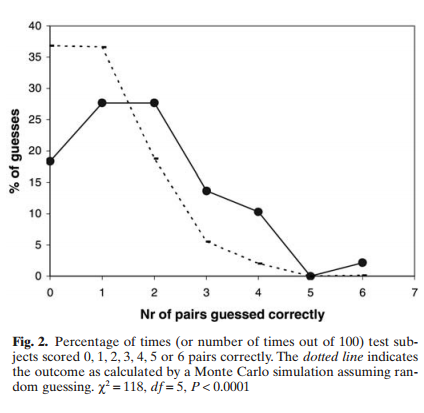 We truly live in interesting times. :)

If you want to read more like this, there was also recently the double paper: Eugenics, Ready or Not I, II. (I could not find a link to part 2.)