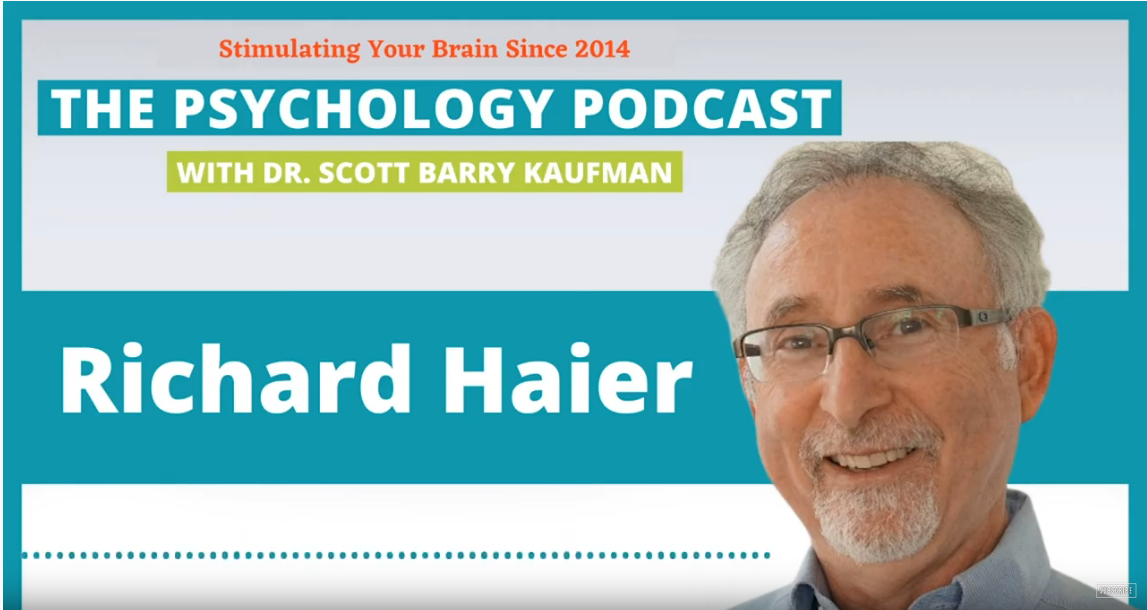 There’s a new interview/podcast-video out, with Richard Haier, the editor in chief of Intelligence journal.

Here’s the contents/times. I have bolded the topics probably of most interest to readers of this blog.

[12:00] Richard on teaching courses regarding race and Intelligence Quotient (IQ)

[17:12] The value of compensatory education to develop intelligence

[30:18] Richard sites Section 6.6 from his The Neuroscience of Intelligence book

[41:05] Richard on whether IQ scores can predict academic and life success

[49:44] On effective communication of science to the public

[1:06:52] Richard reflects on his experience as an Admissions Officer

He has also interviewed various other people I like, e.g. Geoffrey Miller, Rex Jung, Martin Seligman, Brian Nosek, even Plomin. So Scott is a kind of pink-pilled alternative to Stefan Molyneux’s interview series with intelligence researchers. Intelligence research really is the battle for the human mind, so it’s good to see some more competition from different hosts.

Haier: I know or have met most of the players in that space. It’s a relatively small space compared to the rest of intelligence. From a historical point of view, I had many many private conversations with most of the key people, and in private conversation there was no racism. There was just kind of an interest in explaining away these test differences; or not necessarily explaining them away but explaining where they came from. Arthur Jensen was famous for this. He was a bit, had a bit of a touch of Asperger’s syndrome.

Scott: Did you meet him?

Haier: Oh I spent a lot of time with him at meetings.

Scott: You’re the first one to ever say that to me, that’s interesting.

Haier: Well I didn’t fully appreciate this until after he passed away but it turns out I understand that a relative of his had Asperger’s syndrome and suddenly, it kinda fell into place.

Haier: Because he was absolutely unflappable in the face of enormous hostility and criticism. He just stuck to trying to explain to people what the data were. No matter the data might be he felt he could explain it in a neutral way, and he publicly and privately, he would be the first to change his mind about any interpretation of the data if new data came along, and that he hoped that any hypothesis that he had could be disproved by data. He wasn’t afraid of that at all, he was really an advocate of the scientific method.

Scott: [talks about his own Asperger’s]

Haier: Well of all those people that I have met, or knew mostly at meetings, often their work when presented at intelligence meetings was heavily criticized. You know people from the audience would get up and say, it just doesn’t make sense, or you’re misinterpreting that. Only one of these people, I won’t say who, in private conversation struck me as holding racist ideas, and that’s one out of ..

Scott: I know exactly who’s in your head right now, just so you know.

Haier: Very probably, you do, but there’s no sense naming this person. So the point is that most of the people who engaged in that kind of research did it to understand education achievement differences, and because they wanted to fix it. That’s where the whole headstart, compensatory education movement came from. So it’s got a venerable history of good intentions. It did get hijacked. Today there’s a tiny number of people who work in this area. I get papers submitted to the journal I edit on this. We probably, I can’t say for sure, but we probably reject more than we accept. I don’t have a policy of rejecting papers because they are in topics that we censor or anything like that. We kind of have a wide-open gate when it comes to academic freedom in terms of getting papers into the process. But I make sure they get a fair review and if they make the peer review, then we publish them, if they don’t, we don’t. Unfortunately, there are a small number of people on Twitter and other social media, who seem to relish in debates about this. You can’t debate this on Twitter in any reasonable way. The issues are too complex, the technical aspects of the data really require a lot of explanation about what the data mean and what they don’t mean. I have really avoided Twitter fights about this. What I have noticed on Twitter, occasionally, you know, somebody attacks me for doing intelligence research, it’s very occasional and it’s easy to ignore. The hostility about intelligence is really a shame because as you say there’s so much intelligence research that’s interesting and provocative and positive

Two things. First, I guess the special naughty person here is Phil Rushton, but I never met him. The Twitter stuff probably refers to yours truly, A New Radical Centrism, Bo Winegard and various others.

Second, I reject this false standard where hereditarians must be flawless, disinterested people whereas environmentalists can be openly ANTIFA-supporting Marxists, who wish death upon their opponents. I cannot stand the lying academics and the double standards. The nice intelligence researchers have themselves to blame for the race scientists being odd characters. They themselves refuse to get their hands dirty with the data. They prefer these high-horse takes about the bad character of the race scientists. The scientific method is — or can be made! — robust to variation in human motives. Without human motives, there is no science at all because no one is interested in anything without having values (“reason is the slave of the passions”). Value free science is impossible in a strict sense. However, we can strive to make the scientific process more robust against human biases, mainly by having sensible statistical standards that guard against self-delusion: proper pre-registration, open data, and getting rid of the de facto “p < .05 means it’s real and you can claim it” standard. The main bias of social science is too much left-wing politics among the practitioners. This is well-known, it has been noted for 80 years. This is not so in intelligence research, which is very balanced. It’s probably not a coincidence it’s also one of the most robust areas of psychology.