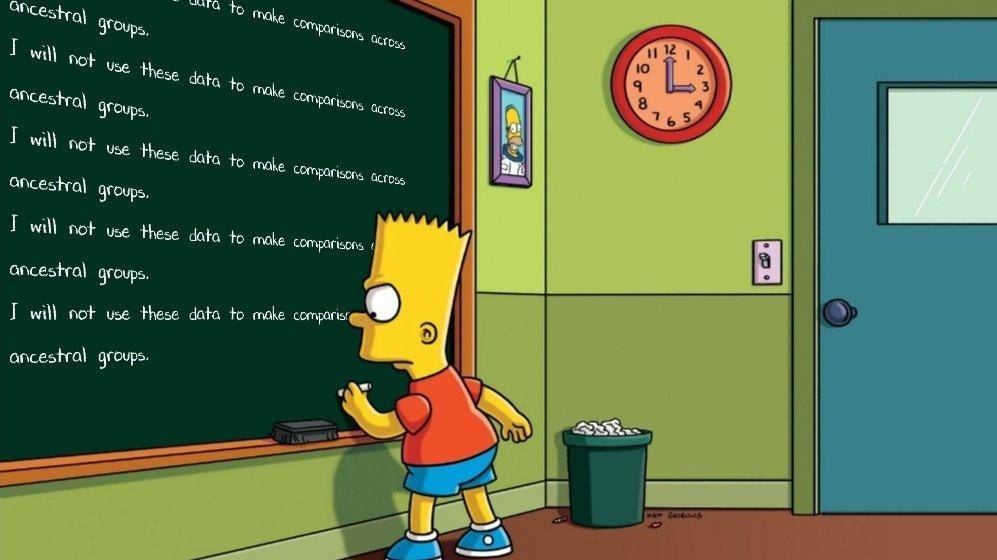 With the coming of Open Science principles, many scientific institutions who were previously aggressively guarding their data decided to put them out for public consumption. Mostly this means other academics look at them and maybe they get your paper retracted for fraud. But sometimes, amateur scientists also use them for decidedly other purposes than what you wanted. This then hilariously leads some people to realize that open science will help racism (in their sense). Of course, their conclusion is that we cannot accept such realities, so we must scale back open science. Kathryn Paige Harden is an amusing proponent of this view:

Now, it gets better. She also has a book out, and get some nice profiling for this in The New Yorker. Paige Harden wants to step the middle ground between totally respectable and harmless individualist behavioral genetics, and the totally evil collectivist (group) behavioral genetics. Naturally, she was called out by those even further on the left. Notably, even Erik Turkheimer, her old master, decided to step it up a bit: 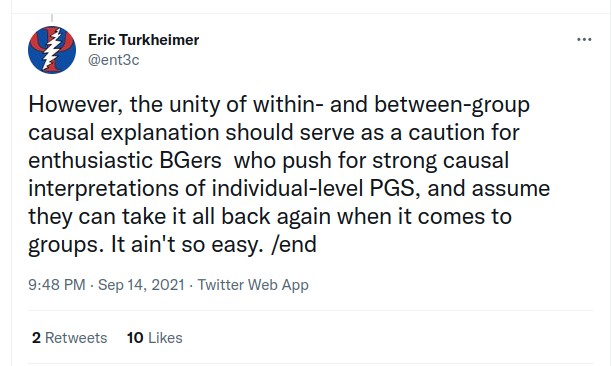 Turkheimer is probably thinking of his own realization when writing the 1991 paper Individual and group differences in adoption studies of IQ. It puts together the unified framework for understanding adoption studies and twin studies, and group differences. Actually, it is mostly a recap of Jensen’s work from the 1970s. Turkheimer even said some nice things about Jensen:

Jensen’s Analysis. This most famous discrepancy between group and individual differences also produced the most concerted attempt to resolve them. Jensen (1973a) provides an exception to the prevalent confusion and rancor surrounding group-difference analyses of adoption studies. Despite some minor points that I raise about Jenser’s analysis and though his resolution of group and individual results may be unduly optimistic, the analysis is important because it demonstrates that group- and individual-difference results belong in the same model. A modified presentation of Jensen’s analysis follows, in terms of Equation 9.

[1973a is Educability and Group Differences, the first major book by Jensen setting up the hereditarian paradigm]

Turkheimer was seemingly inspired to write this 1991 paper by a prior paper from 1990, Roubertoux, P. L., & Capron, C. (1990). Are intelligence differences hereditarily transmitted?:

Defines 3 functions of genetic analysis with respect to IQ to (1) describe the mode of transmission of a characteristic, (2) estimate the genetic components of the variation between relatives, and (3) estimate the genetic components of the variation between groups. No candidate gene has been associated with differences in intelligence situated within the limits of nonpathological variation, and the closer the similarity in intelligence the closer the genetic similarity. However, the bias inherent in the collection of the data does not allow the observed variance to be decomposed into its genetic components. The significance of the parameters furnished by quantitative genetics is not clearly established from a genetic viewpoint. Concerning the differences between groups of individuals (classes or so-called “races”), it seems that there are no tools that allow these differences to be interpreted in terms of genetic effects.

This paper features the usual, but now outdated claims of lacking genes. WHERE ARE THE GENES? Well, now we found some of them, so what’s next? Turkheimer replies in the 1990 paper On the alleged independence of variance components and group differences:

Addresses concerns related to P. L. Roubertoux and C. Capron’s (see record 1991-17657-001) assertions on genetic analysis that partitioning of phenotype variance and explanation of mean differences between groups are independent, and the contribution of genetic factors to IQ is neither disputable nor convincingly quantifiable. The quantification of genetic factors is illustrated algebraically.

OK, now we found some of those variants (genes in evolutionary sense of units of selection á la Dawkins). Now what? Well, in 2006 Gerhard Meisenberg reviewed Richard Lynn’s Race Differences in Intelligence book. It is an interesting, mostly critical review. But it includes this important passage:

Not one of these arguments offers positive proof for the importance of genes. But this does not mean that Lynn’s opponents have better arguments. They do not. This is highlighted by James Flynn’s response to Jensen’s argument (argument #8) about gene effects at the individual and group levels. Flynn (1987b) argued that the massive IQ gains that have been observed during the 20th century (Flynn, 1987a) can only have environmental causes. Therefore it would be unlikely that environmental causes are unimportant for differences between races.

Sorry, but that’s where our wisdom ends. Only new findings in molecular genetics can end this deplorable state of affairs. The question is precise, and it is amenable to scientific investigation: which genetic polymorphisms cause IQ differences among individuals within races, and do these polymorphisms have different allele frequencies in different racial groups?

This review was published in Mankind Quarterly. What happened then was that only 7 years later, Davide Piffer steps up to show that, indeed, frequencies of such variants do differ by populations/races in roughly the manner hereditarians predicted: Factor analysis of population allele frequencies as a simple, novel method of detecting signals of recent polygenic selection: The example of educational attainment and IQ. The study is even published in Mankind Quarterly too, always the frontier. As we now know, these findings replicate very well: 2015, 2017, 2019, and 2021. The updates generally coincidence with the publication of a new set of GWAS results to base polygenic scores on. As the reader might know, a new edition is just about ready for release, it’s the EA4 — 4th large GWAS of educational attainment. Russell Warne provides a summary of the talk presented at ISIR 2021 (online only):

Next presentation at #ISIR2021 is James Lee's discussion of a GWAS of educational attainment in 3 million individuals. 😲🧬 pic.twitter.com/rpqYeuJosZ

So it’s time to download the new GWAS results and have another round of results, right? Well, no! There’s now a login page, and you need an institutional email too! There’s even an agreement you have to swear to: 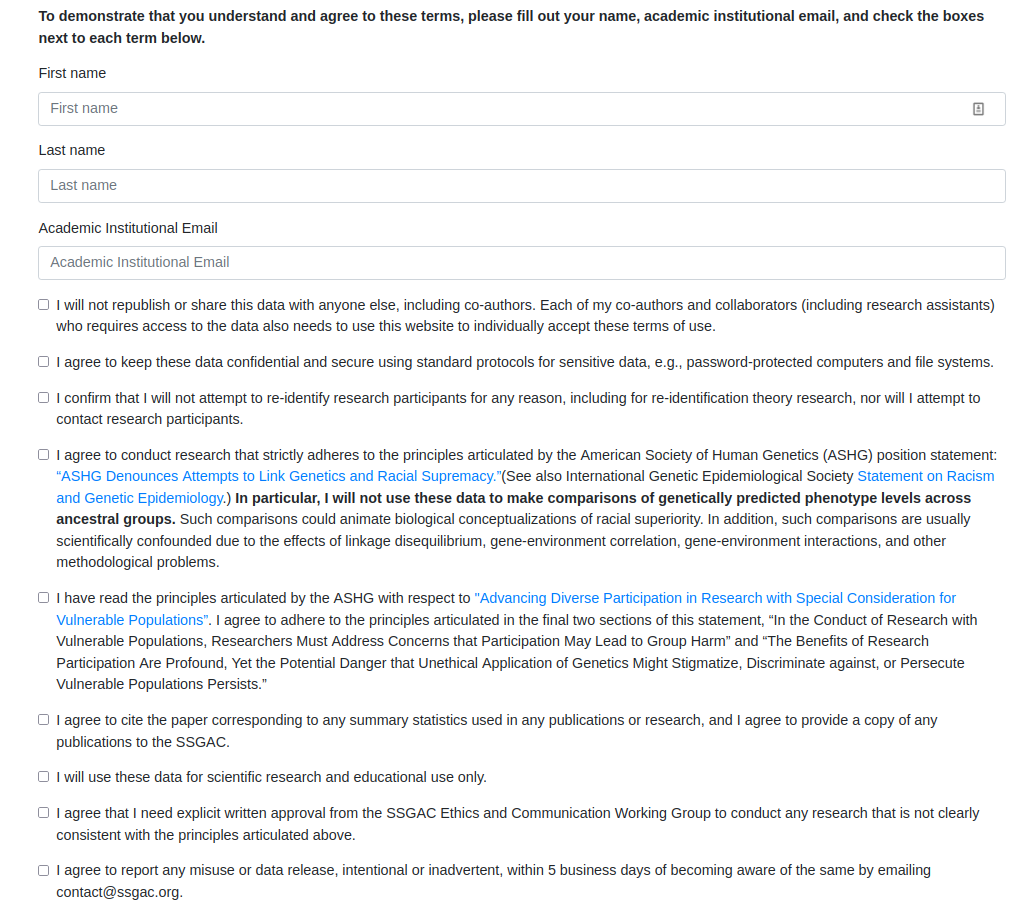 I agree to conduct research that strictly adheres to the principles articulated by the American Society of Human Genetics (ASHG) position statement: “ASHG Denounces Attempts to Link Genetics and Racial Supremacy.”(See also International Genetic Epidemiological Society Statement on Racism and Genetic Epidemiology.) In particular, I will not use these data to make comparisons across ancestral groups. Such comparisons could animate biological conceptualizations of racial superiority. In addition, such comparisons are usually scientifically confounded due to the effects of linkage disequilibrium, gene-environment correlation, gene-environment interactions, and other methodological problems.

If you don’t play ball, they reverse the rights to:

I agree that violating any of the Terms and Conditions may result in consequences including, but not limited to, any or all of the following:

Contacting my institution’s institutional review board (IRB) and/or scientific integrity office
Contacting my supervisor, department chair, dean, or similar institutional authority
Contacting any relevant funder (governmental or private)
Blocking the IP address I used to download data and/or blocking the public IP address associated with my institution(s)
Contacting the editor(s) of relevant journal(s)
Publicly describing my violations, in venues that include but are not limited to social media and letters to the editor
Seeking arbitration of any dispute arising under these Terms and Conditions.

So we have come full circle. You must not cite the wrong people, their papers must be retracted, AND we are going to hide research results from you too, so you can’t compute the forbidden results. This is of course the exact opposite of what open science stands for. It’s straight out of a how to Soviet textbook.

Secular changes in race differences in height: a mystery

What have we learned from the 2022 education GWAS?